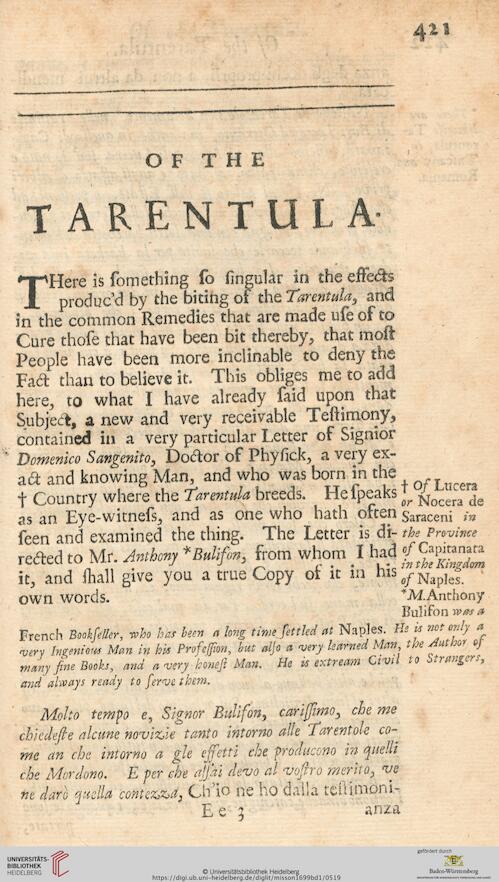 
THere is something so singular in the effects
produc’d by the biting of the Tarentula, and
in the common Remedies that are made use of to
Cure those that have been bit thereby, that most
People have been more inclinable to deny the
Fadi than to believe it. This obliges me to add
here, to what I have already said upon that
Subject, a new and very receivable Testimony,
contained in a very particular Letter of Signior
Domenico Sangenito, Doctor of Physick, a very ex-
ad and knowing Man, and who was born in the
t Country where the Tarentula breeds. He speaks |r^0^gCae^
as an Eye-witness, and as one who hath often SaracenT*/
seen and examined the thing. The Letter is di- the Province
reded to Mr. Anthony *Bulison, from whom I had °f Capitanata
it, and shall give you a true Copy of it in his
own words. *MAnthony
Bulifon was a
French Bookfeller, who has been a long time fettled at Naples, lie is not only a
very Ingenious Man in his Pnsesion, but aljo a very learned Man, the Author os
many fine Books, and a very honeft Man. He is extream Civil to Strangers,
and always ready to servc them.
Molto tempo e, Signor Bulison, cariffimo, che me
chiedefte alcune nowizse tanto intorno alle Tar ent ole co-
me an che intorno a gle essetti che producono in queUi
che Mordono. E per che ajjai devo al voftro merit o} ve
ne daro qttclla contend, Ch’io ne ho dalla rcilimoni-
Ee 5 anza