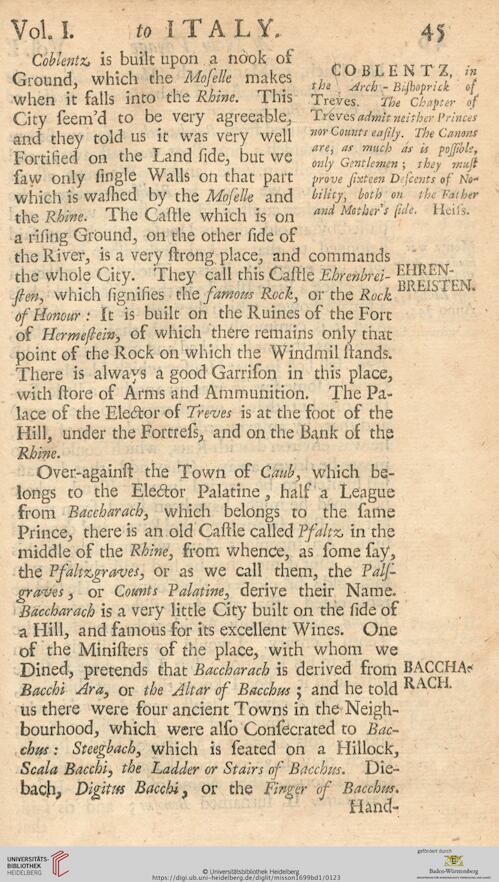 Information about OCR text
Vol I.

Coblentz, is built upon a nook of
Ground, which the Mofelle makes
when it falls into the Rhine. This
City seem’d to be very agreeable,
and they told us it was very well
Fortified on the Land side, but we
saw only single Walls on that part
which is walked by the Mofelle and
the Rhine. The Castle which is on

COBLENTZ, in
t he \ Arch - Bijboprick os
Treves. The Chapter os
Treves admit neither Princes
nor Counts easily. The Canons
are, as. much ds is fojsible,
only Gentlemen ; they mufi
prove sixteen Deficents os No-
bility, both on the Father
and Mother s (ide. Heil’s.

a rising Ground, on the other side of
the River, is a very strong place, and commands
the whole City. They call this Castle Ehrenbrei-
sim, which signifies the famous Rock, or the Rock L '
of Honour : It is built on the Ruines of the Fort
of Hermeftem, of which there remains only that
point of the Rock on which the Windmil Hands.
There is always a good Garrison in this place,
with store of Arms and Ammunition. The Pa-
lace of the Elector of Treves is at the foot of the

Hill, under the Fortress, and on the Bank of the
Rhine.

Over-against the Town of Chub, which be-
longs to the Elector Palatine, half a League
from Baccharach, which belongs to the same
Prince, there is an old Castle called Rfaltz, in the
middle of the Rhine, from ’whence, as some say,
the Rsaltz.gr aves, or as we call them, the Rals-
grave s, or Counts Palatine, derive their Name.
Baccharach is a very little City built on the side of
a Hill, and famous for its excellent Wines. One
of the Ministers of the place, with whom we
Dined, pretends that Baccharach is derived from BACCHA?
Bacchi Ara, or the Altar os Bacchus ; and he told R^CH.
us there were four ancient Towns in the Neigh-
bourhood, which were also Consecrated to Bac-
chus : Steegbach, which is seated on a Hillock,
Scala Bacchi, the Ladder or Stairs os Bacchus. Die-
bach, Digitus Bacchi, or the Finger of Bacchus.
Hand-