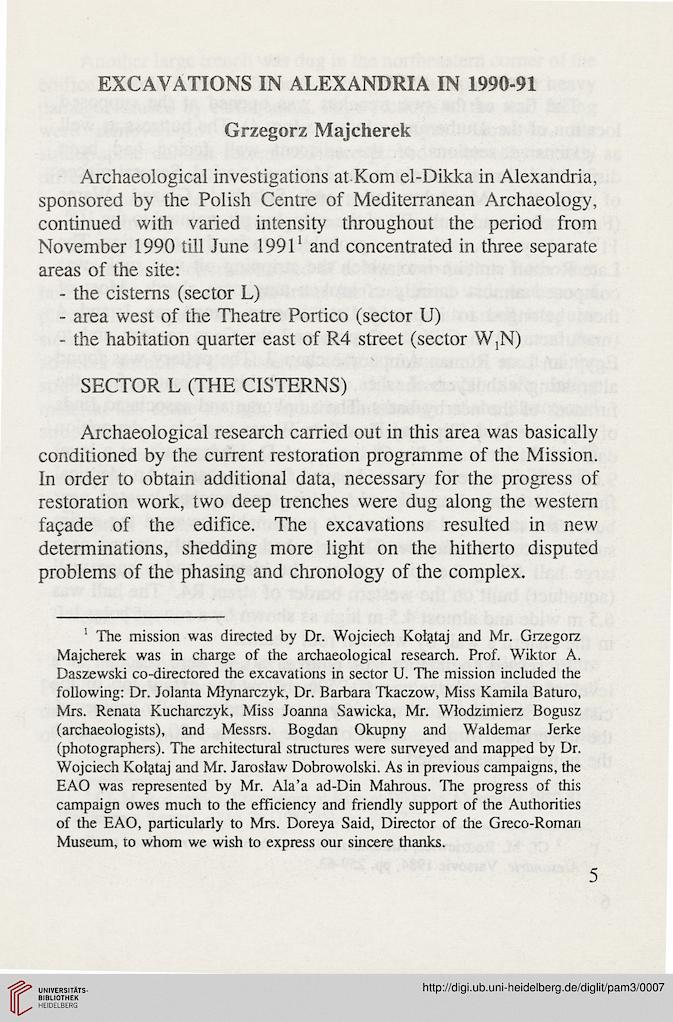 Archaeological investigations at Kom el-Dikka in Alexandria,
sponsored by the Polish Centre of Mediterranean Archaeology,
continued with varied intensity throughout the period from
November 1990 till June 1991 1 and concentrated in three separate
areas of the site:

- area west of the Theatre Portico (sector U)

Archaeological research carried out in this area was basically
conditioned by the current restoration programme of the Mission.
In order to obtain additional data, necessary for the progress of
restoration work, two deep trenches were dug along the westem
fagade of the edifice. The excavations resulted in new
determinations, shedding more light on the hitherto disputed
problems of the phasing and chronology of the complex.

1 The mission was directed by Dr. Wojciech Koiataj and Mr. Grzegorz
Majcherek was in charge of the archaeological research. Prof. Wiktor A.
Daszewski co-directored the excavations in sector U. The mission included the
following: Dr. Jolanta Miynarczyk, Dr. Barbara Tkaczow, Miss Kamila Baturo,
Mrs. Renata Kucharczyk, Miss Joanna Sawicka, Mr. Wlodzimierz Bogusz
(archaeologists), and Messrs. Bogdan Okupny and Waldemar Jerke
(photographers). The architectural stmctures were surveyed and mapped by Dr.
Wojciech Kotjtaj and Mr. Jarosiaw Dobrowolski. As in previous campaigns, the
EAO was represented by Mr. Ala’a ad-Din Mahrous. The progress of this
campaign owes much to the efficiency and friendly support of the Authorities
of the EAO, particularly to Mrs. Doreya Said, Director of the Greco-Roman
Museum, to whom we wish to express our sincere thanks.