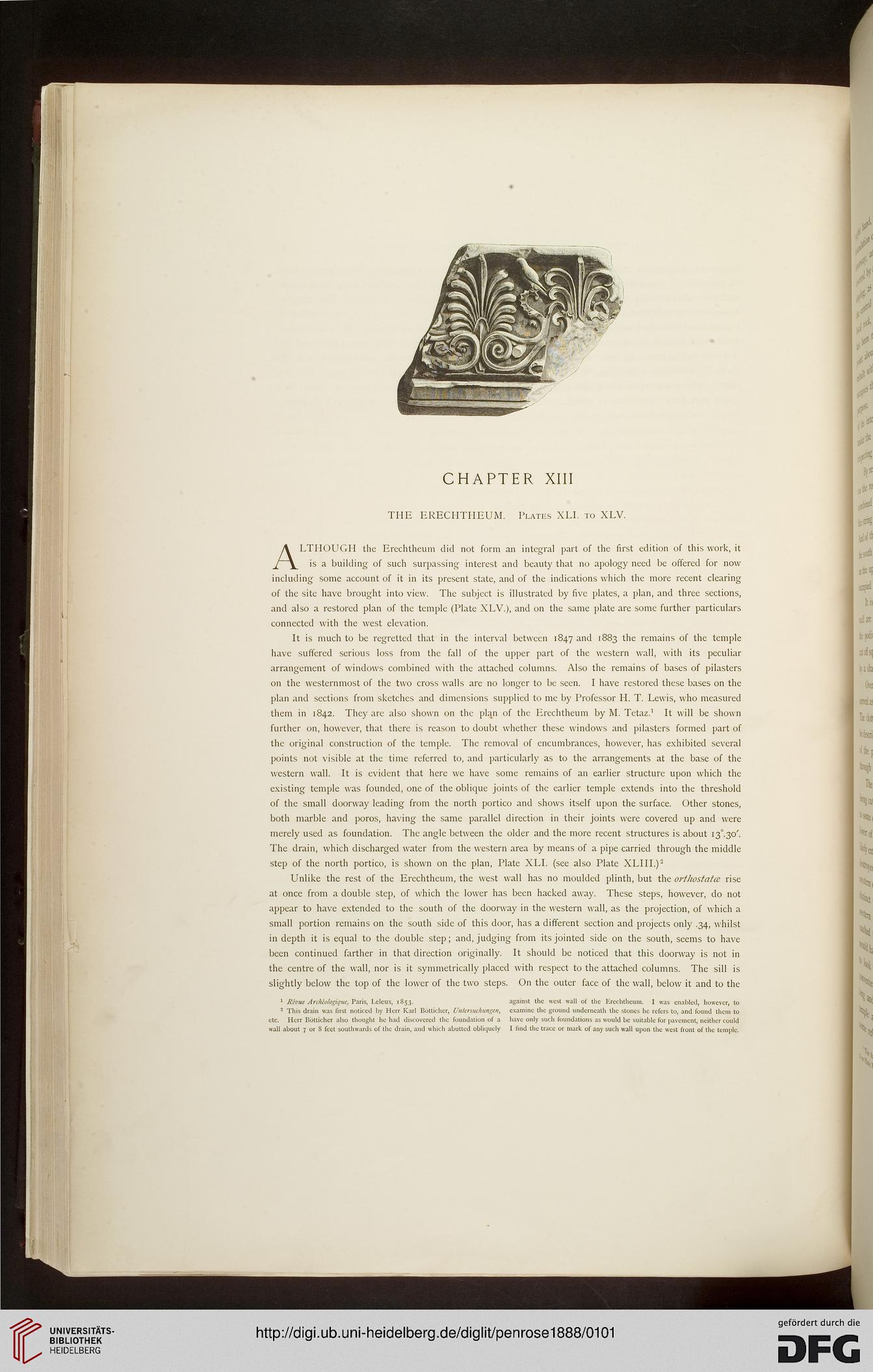 THE ERECHTHEUM. Plates XLI. to XLV.

ALTHOUGH the Erechtheum did not form an integral part of the first edition of this work, it
is a building of such surpassing interest and beauty that no apology need be offered for now
including some account of it in its present state, and of the indications which the more recent clearing
of the site have brought into view. The subject is illustrated by five plates, a plan, and three sections,
and also a restored plan of the temple (Plate XLV.), and on the same plate are some further particulars
connected with the west elevation.

It is much to be regretted that in the interval between 1847 and 1883 the remains of the temple
have suffered serious loss from the fall of the upper part of the western wall, with its peculiar
arrangement of windows combined with the attached columns. Also the remains of bases of pilasters
on the westernmost of the two cross walls are no longer to be seen. I have restored these bases on the
plan and sections from sketches and dimensions supplied to me by Professor H. T. Lewis, who measured
them in 1842. They are also shown on the plan of the Erechtheum by M. Tetaz.1 It will be shown
further on, however, that there is reason to doubt whether these windows and pilasters formed part of
the original construction of the temple. The removal of encumbrances, however, has exhibited several
points not visible at the time referred to, and particularly as to the arrangements at the base of the
western wall. It is evident that here we have some remains of an earlier structure upon which the
existing temple was founded, one of the oblique joints of the earlier temple extends into the threshold
of the small doorway leading from the north portico and shows itself upon the surface. Other stones,
both marble and poros, having the same parallel direction in their joints were covered up and were
merely used as foundation. The angle between the older and the more recent structures is about i3°-3o'.
The drain, which discharged water from the western area by means of a pipe carried through the middle
step of the north portico, is shown on the plan, Plate XLI. (see also Plate XLI 11.)2

Unlike the rest of the Erechtheum, the west wall has no moulded plinth, but the orthostatcc rise
at once from a double step, of which the lower has been hacked away. These steps, however, do not
appear to have extended to the south of the doorway in the western wall, as the projection, of which a
small portion remains on the south side of this door, has a different section and projects only .34, whilst
in depth it is equal to the double step; and, judging from its jointed side on the south, seems to have
been continued farther in that direction originally. It should be noticed that this doorway is not in
the centre of the wall, nor is it symmetrically placed with respect to the attached columns. The sill is
slightly below the top of the lower of the two steps. On the outer face of the wall, below it and to the

1 Rtvue Archlologique, Paris, Leleux, 1853. against the west wall of the Erechtheum. I was enabled, however, to

2 This drain was first noticed by Herr Karl Botticher, Untersuchungen, examine the ground underneath the stones he refers to, and found them to
etc. Herr Botticher also thought he had discovered the foundation of a have only such foundations as would be suitable for pavement, neither could
wall about 7 or 8 feet southwards of the drain, and which abutted obliquely I find the trace or mark of any such wall upon the west front of the temple.