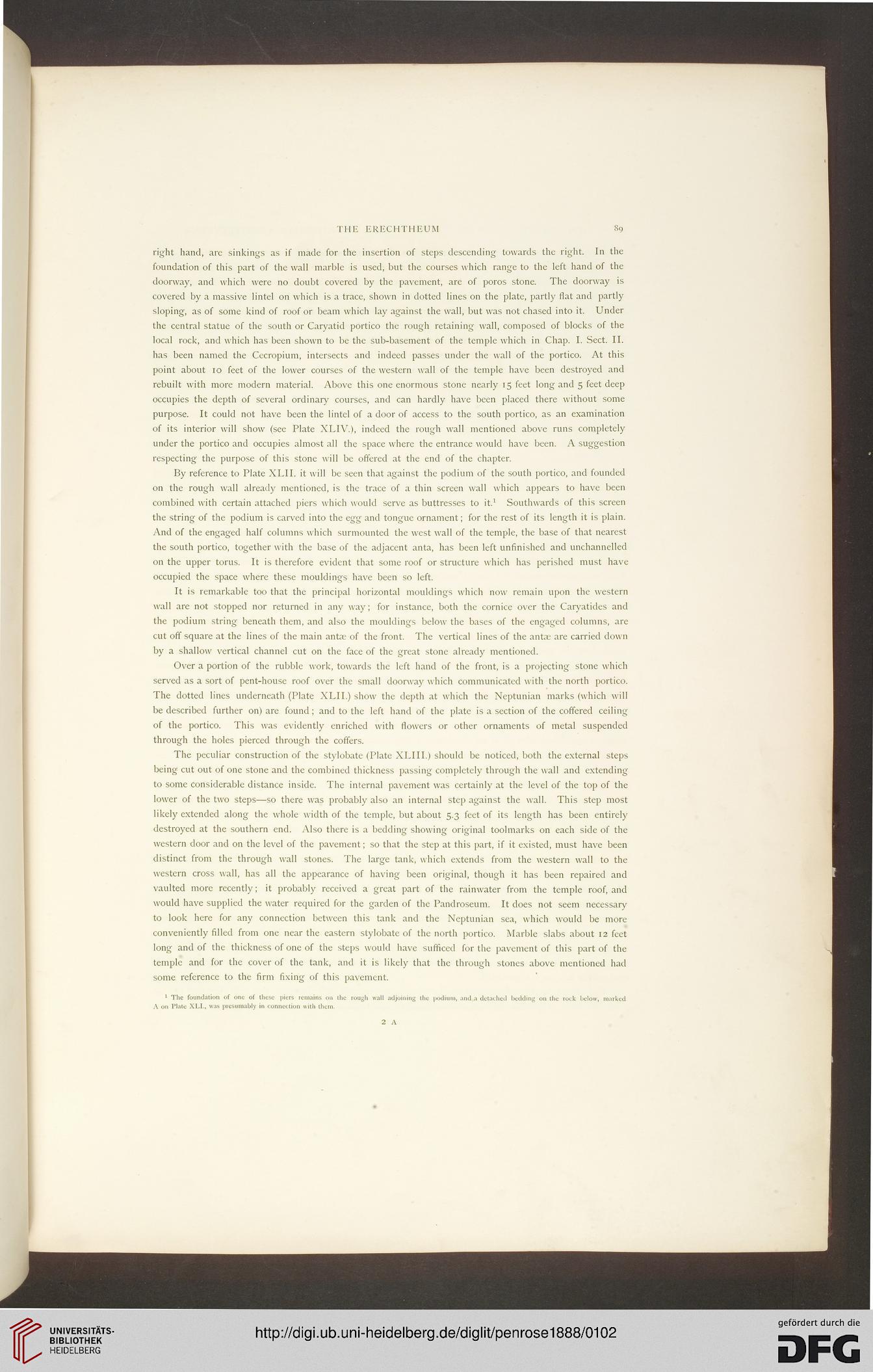 right hand, are sinkings as if made for the insertion of steps descending towards the right. In the
foundation of this part of the wall marble is used, but the courses which range to the left hand of the
doorway, and which were no doubt covered by the pavement, are of poros stone. The doorway is
covered by a massive lintel on which is a trace, shown in dotted lines on the plate, partly flat and partly
sloping, as of some kind of roof or beam which lay against the wall, but was not chased into it. Under
the central statue of the south or Caryatid portico the rough retaining wall, composed of blocks of the
local rock, and which has been shown to be the sub-basement of the temple which in Chap. I. Sect. II.
has been named the Cecropium, intersects and indeed passes under the wall of the portico. At this
point about 10 feet of the lower courses of the western wall of the temple have been destroyed and
rebuilt with more modern material. Above this one enormous stone nearly 15 feet long and 5 feet deep
occupies the depth of several ordinary courses, and can hardly have been placed there without some
purpose. It could not have been the lintel of a door of access to the south portico, as an examination
of its interior will show (see Plate XLIV.), indeed the rough wall mentioned above runs completely
under the portico and occupies almost all the space where the entrance would have been. A suggestion
respecting the purpose of this stone will be offered at the end of the chapter.

By reference to Plate XLII. it will be seen that against the podium of the south portico, and founded
on the rough wall already mentioned, is the trace of a thin screen wall which appears to have been
combined with certain attached piers which would serve as buttresses to it.1 Southwards of this screen
the string of the podium is carved into the egg and tongue ornament; for the rest of its length it is plain.
And of the engag'ed half columns which surmounted the west wall of the temple, the base of that nearest
the south portico, together with the base of the adjacent anta, has been left unfinished and unchannelled
on the upper torus. It is therefore evident that some roof or structure which has perished must have
occupied the space where these mouldings have been so left.

It is remarkable too that the principal horizontal mouldings which now remain upon the western
wall are not stopped nor returned in any way; for instance, both the cornice over the Caryatides and
the podium string beneath them, and also the mouldings below the bases of the engaged columns, are
cut off square at the lines of the main anta; of the front. The vertical lines of the antae are carried down
by a shallow vertical channel cut on the face of the great stone already mentioned.

Over a portion of the rubble work, towards the left hand of the front, is a projecting stone which
served as a sort of pent-house roof over the small doorway which communicated with the north portico.
The dotted lines underneath (Plate XLII.) show the depth at which the Neptunian marks (which will
be described further on) are found; and to the left hand of the plate is a section of the coffered ceiling
of the portico. This was evidently enriched with flowers or other ornaments of metal suspended
through the holes pierced through the coffers.

The peculiar construction of the stylobate (Plate XLIII.) should be noticed, both the external steps
being cut out of one stone and the combined thickness passing completely through the wall and extending
to some considerable distance inside. The internal pavement was certainly at the level of the top of the
lower of the two steps—so there was probably also an internal step against the wall. This step most
likely extended along the whole width of the temple, but about 5.3 feet of its length has been entirely
destroyed at the southern end. Also there is a bedding showing original toolmarks on each side of the
western door and on the level of the pavement; so that the step at this part, if it existed, must have been
distinct from the through wall stones. The large tank, which extends from the western wall to the
western cross wall, has all the appearance of having been original, though it has been repaired and
vaulted more recently; it probably received a great part of the rainwater from the temple roof, and
would have supplied the water required for the garden of the Pandroseum. It does not seem necessary
to look here for any connection between this tank and the Neptunian sea, which would be more
conveniently filled from one near the eastern stylobate of the north portico. Marble slabs about 12 feet
long and of the thickness of one of the steps would have sufficed for the pavement of this part of the
temple and for the cover of the tank, and it is likely that the through stones above mentioned had
some reference to the firm fixing of this pavement.

1 The foundation of one of these piers remains on the rough wall adjoining the podium, and a detached bedding on the rock below, marked
A on Plate XLL, was presumably in connection with them.