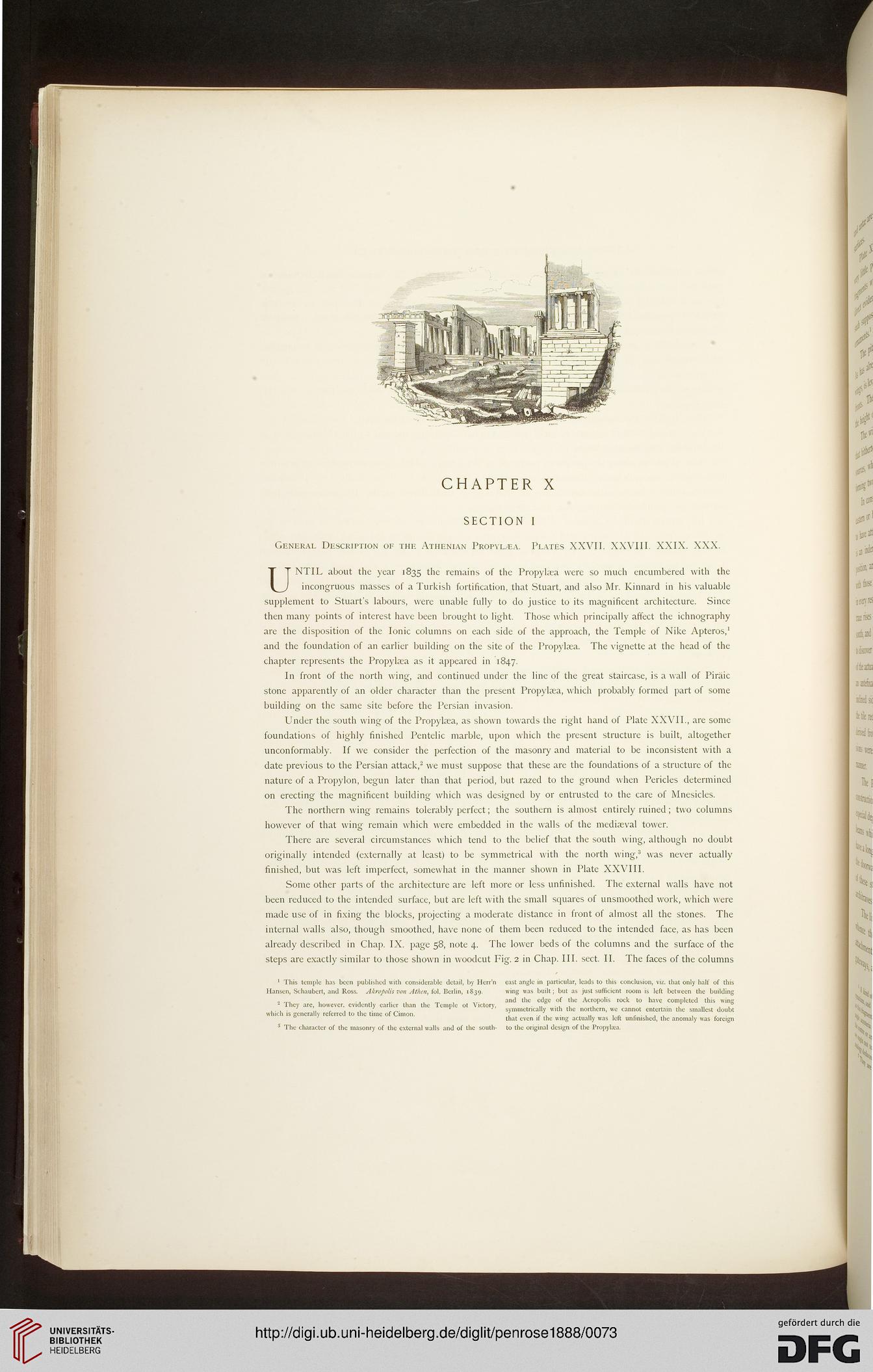 UNTIL about the year 1835 the remains of the Propylaea were so much encumbered with the
incongruous masses of a Turkish fortification, that Stuart, and also Mr. Kinnard in his valuable
supplement to Stuart's labours, were unable fully to do justice to its magnificent architecture. Since
then many points of interest have been brought to light. Those which principally affect the ichnography
are the disposition of the Ionic columns on each side of the approach, the Temple of Nike Apteros,'
and the foundation of an earlier building on the site of the Propylaea. The vignette at the head of the
chapter represents the Propylaea as it appeared in 1847.

In front of the north wing, and continued under the line of the great staircase, is a wall of Piraic
stone apparently of an older character than the present Propylaea, which probably formed part of some
building on the same site before the Persian invasion.

Under the south wing of the Propylaea, as shown towards the right hand of Plate XXVII., are some
foundations of highly finished Pentelic marble, upon which the present structure is built, altogether
unconformably. If we consider the perfection of the masonry and material to be inconsistent with a
date previous to the Persian attack,2 we must suppose that these are the foundations of a structure of the
nature of a Propylon, begun later than that period, but razed to the ground when Pericles determined
on erecting the magnificent building which was designed by or entrusted to the care of Mnesicles.

The northern wing remains tolerably perfect; the southern is almost entirely ruined; two columns
however of that wing remain which were embedded in the walls of the mediaeval tower.

There are several circumstances which tend to the belief that the south wing, although no doubt
originally intended (externally at least) to be symmetrical with the north wing,3 was never actually
finished, but was left imperfect, somewhat in the manner shown in Plate XXVIII.

Some other parts of the architecture are left more or less unfinished. The external Avails have not
been reduced to the intended surface, but are left with the small squares of unsmoothed work, which were
made use of in fixing the blocks, projecting a moderate distance in front of almost all the stones. The
internal walls also, though smoothed, have none of them been reduced to the intended face, as has been
already described in Chap. IX. page 58, note 4. The lower beds of the columns and the surface of the
steps are exactly similar to those shown in woodcut Fig. 2 in Chap. III. sect. II. The faces of the columns

1 This temple has been published with considerable detail, by Herr'n east angle in particular, leads to this conclusion, viz. that only half of this

2 They are, however, evidently earlier than the Temple ot Victory
which is gencrall) referred to the time of Cimon.

ing was built; but as just sufficient room is left between the building

symmetrically with the northern, we cannot entertain the smallest doubt

that even if the wing actually was left unfinished, the anomaly was foreign

The character of the masonry of the external walls and of the south- to the original design of the Propylaea.