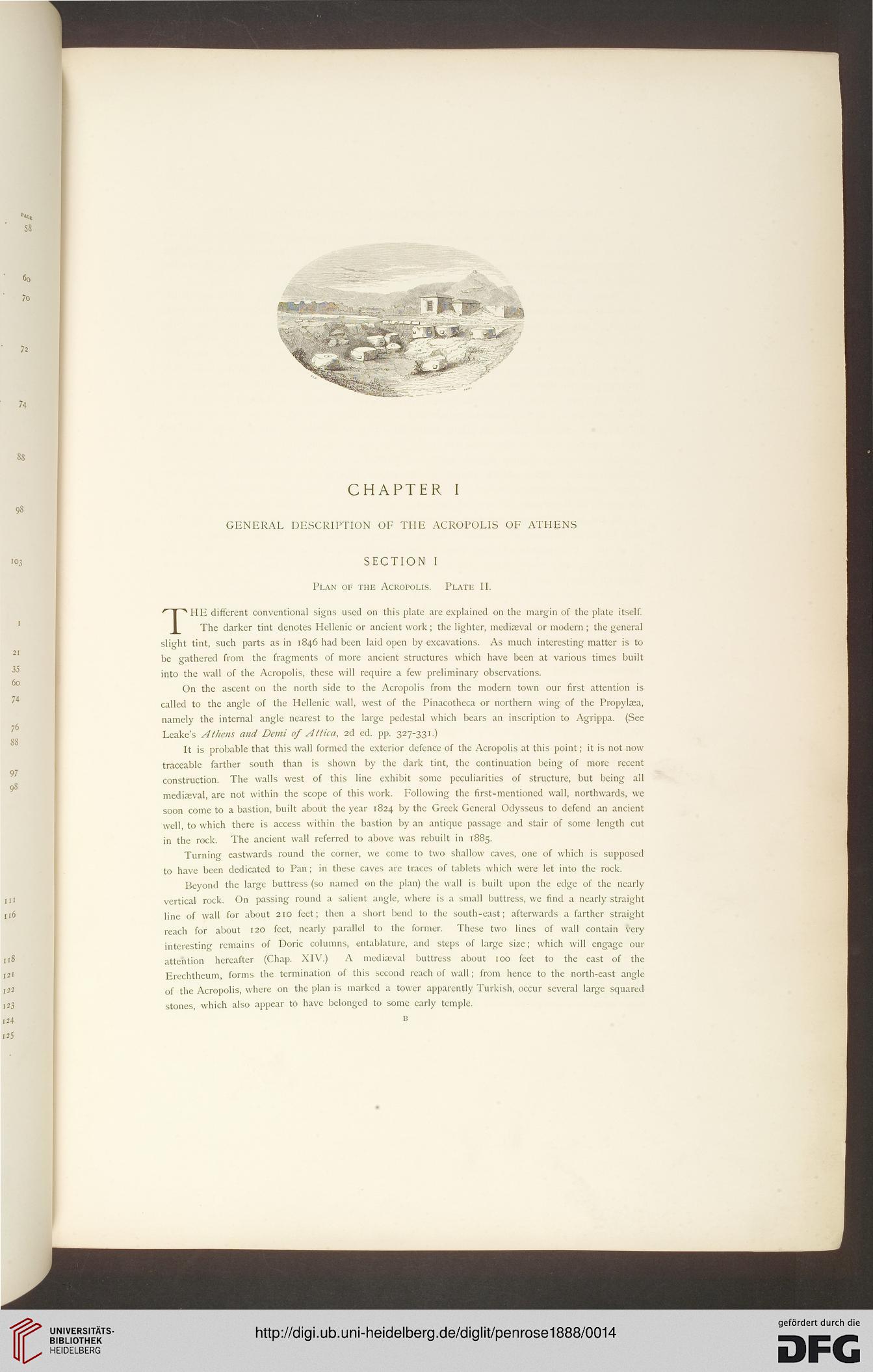 GENERAL DESCRIPTION OF THE ACROPOLIS OF ATHENS

SECTION I
Plan of the Acropolis. Plate II.

THE different conventional signs used on this plate are explained on the margin of the plate itself.
The darker tint denotes Hellenic or ancient work; the lighter, mediaeval or modern; the general
slight tint, such parts as in 1846 had been laid open by excavations. As much interesting matter is to
be gathered from the fragments of more ancient structures which have been at various times built
into the wall of the Acropolis, these will require a few preliminary observations.

On the ascent on the north side to the Acropolis from the modern town our first attention is
called to the angle of the Hellenic wall, west of the Pinacotheca or northern wing of the Propylaea,
namely the internal angle nearest to the large pedestal which bears an inscription to Agrippa. (See
Leake's Athens and Demi of Attica, 2d ed. pp. 327-331.)

It is probable that this wall formed the exterior defence of the Acropolis at this point; it is not now
traceable farther south than is shown by the dark tint, the continuation being of more recent
construction. The walls west of this line exhibit some peculiarities of structure, but being all
mediaeval, are not within the scope of this work. Following the first-mentioned wall, northwards, we
soon come to a bastion, built about the year 1824 by the Greek General Odysseus to defend an ancient
well, to which there is access within the bastion by an antique passage and stair of some length cut
in the rock. The ancient wall referred to above was rebuilt in 1885.

Turning eastwards round the corner, we come to two shallow caves, one of which is supposed
to have been dedicated to Pan; in these caves are traces of tablets which were let into the rock.

Beyond the large buttress (so named on the plan) the wall is built upon the edge of the nearly
vertical rock. On passing round a salient angle, where is a small buttress, we find a nearly straight
line of wall for about 210 feet; then a short bend to the south-east; afterwards a farther straight
reach for about 120 feet, nearly parallel to the former. These two lines of wall contain very
interesting remains of Doric columns, entablature, and steps of large size; which will engage our
attention hereafter (Chap. XIV.) A mediaeval buttress about 100 feet to the east of the
Erechtheum, forms the termination of this second reach of wall; from hence to the north-east angle
of the Acropolis, where on the plan is marked a tower apparently Turkish, occur several large squared
stones, which also appear to have belonged to some early temple.