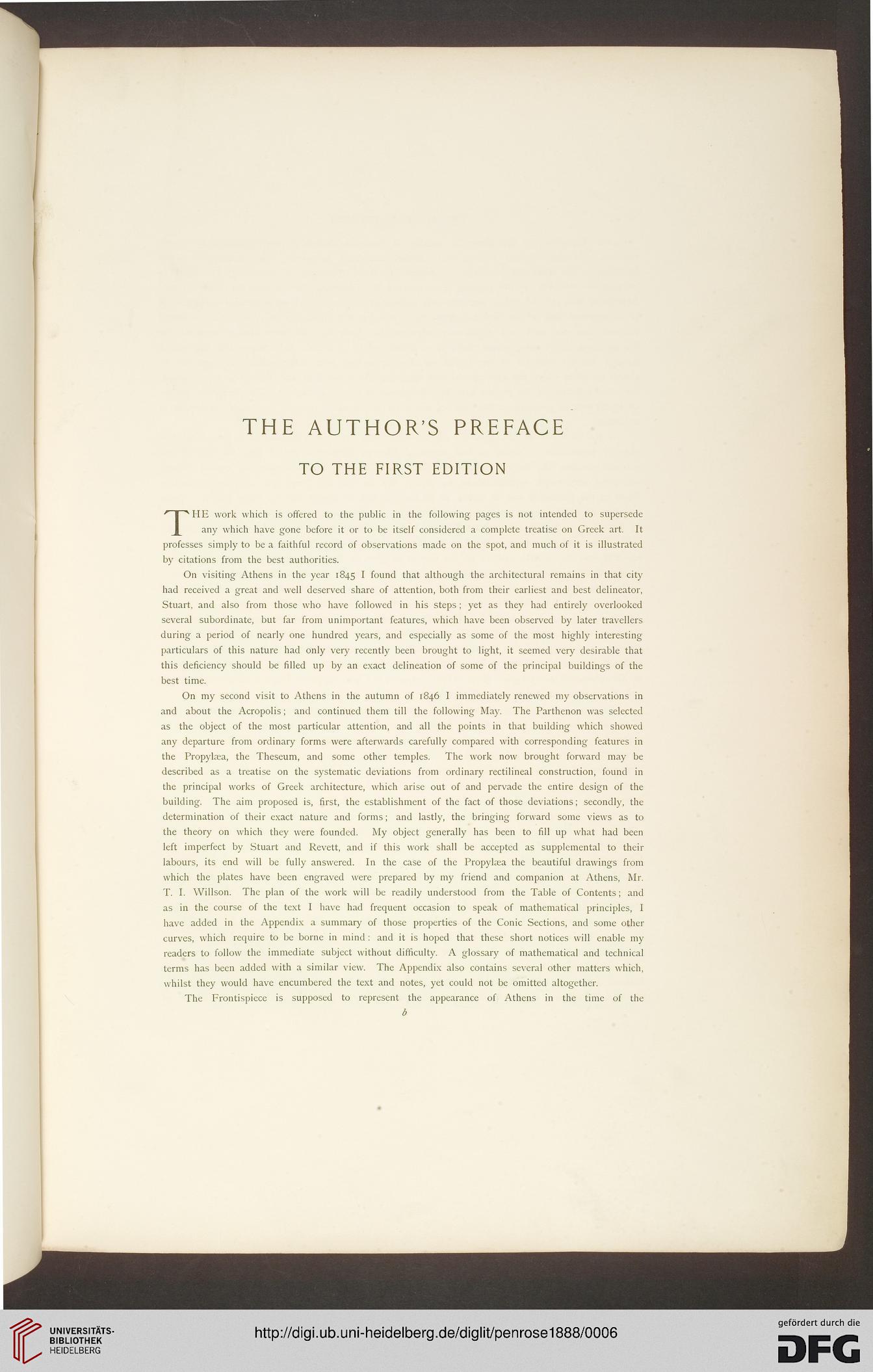 TO THE FIRST EDITION

THE work which is offered to the public in the following pages is not intended to supersede
any which have gone before it or to be itself considered a complete treatise on Greek art. It
professes simply to be a faithful record of observations made on the spot, and much of it is illustrated
by citations from the best authorities.

On visiting Athens in the year 1845 I found that although the architectural remains in that city
had received a great and well deserved share of attention, both from their earliest and best delineator,
Stuart, and also from those who have followed in his steps ; yet as they had entirely overlooked
several subordinate, but far from unimportant features, which have been observed by later travellers
during a period of nearly one hundred years, and especially as some of the most highly interesting
particulars of this nature had only very recently been brought to light, it seemed veiy desirable that
this deficiency should be filled up by an exact delineation of some of the principal buildings of the
best time.

On my second visit to Athens in the autumn of 1846 I immediately renewed my observations in
and about the Acropolis; and continued them till the following May. The Parthenon was selected
as the object of the most particular attention, and all the points in that building which showed
any departure from ordinary forms were afterwards carefully compared with corresponding features in
the Propylasa, the Theseum, and some other temples. The work now brought forward may be
described as a treatise on the systematic deviations from ordinary rectilineal construction, found in
the principal works of Greek architecture, which arise out of and pervade the entire design of the
building. The aim proposed is, first, the establishment of the fact of those deviations; secondly, the
determination of their exact nature and forms; and lastly, the bringing forward some views as to
the theory on which they were founded. My object generally has been to fill up what had been
left imperfect by Stuart and Revett, and if this work shall be accepted as supplemental to their
labours, its end will be fully answered. In the case of the Propylaea the beautiful drawings from
which the plates have been engraved were prepared by my friend and companion at Athens, Mr.
T. I. Willson. The plan of the work will be readily understood from the Table of Contents; and
as in the course of the text I have had frequent occasion to speak of mathematical principles, I
have added in the Appendix a summary of those properties of the Conic Sections, and some other
curves, which require to be borne in mind : and it is hoped that these short notices will enable my
readers to follow the immediate subject without difficulty. A glossary of mathematical and technical
terms has been added with a similar view. The Appendix also contains several other matters which,
whilst they would have encumbered the text and notes, yet could not be omitted altogether.