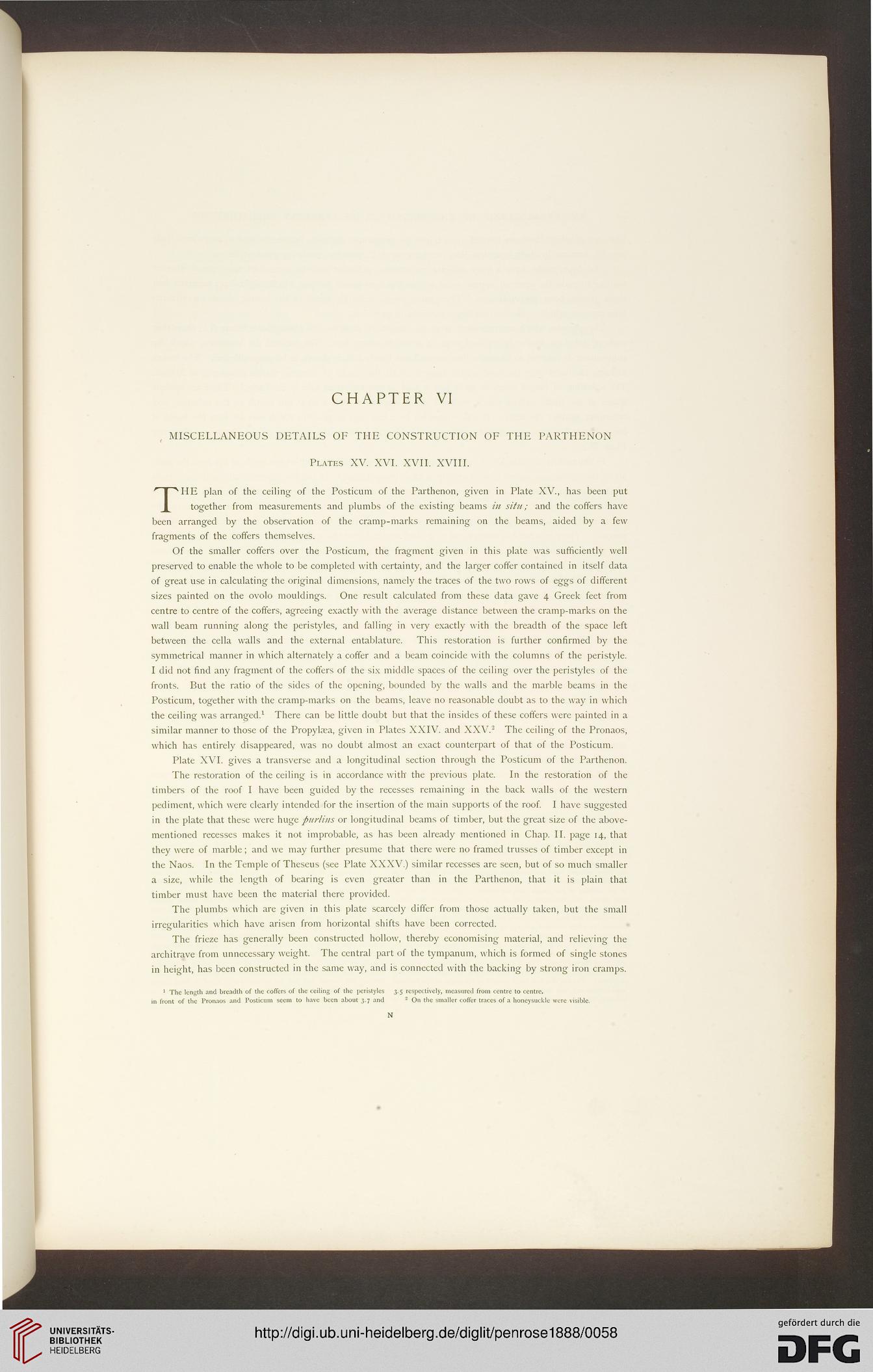 MISCELLANEOUS DETAILS OE THE CONSTRUCTION OF THE PARTHENON

THE plan of the ceiling of the Posticum of the Parthenon, given in Plate XV., has been put
together from measurements and plumbs of the existing beams in situ; and the coffers have
been arranged by the observation of the cramp-marks remaining on the beams, aided by a few
fragments of the coffers themselves.

Of the smaller coffers over the Posticum, the fragment given in this plate was sufficiently well
preserved to enable the whole to be completed with certainty, and the larger coffer contained in itself data
of great use in calculating the original dimensions, namely the traces of the two rows of eggs of different
sizes painted on the ovolo mouldings. One result calculated from these data gave 4 Greek feet from
centre to centre of the coffers, agreeing exactly with the average distance between the cramp-marks on the
wall beam running along the peristyles, and falling in very exactly with the breadth of the space left
between the cella walls and the external entablature. This restoration is further confirmed by the
symmetrical manner in which alternately a coffer and a beam coincide with the columns of the peristyle.
I did not find any fragment of the coffers of the six middle spaces of the ceiling over the peristyles of the
fronts. But the ratio of the sides of the opening, bounded by the walls and the marble beams in the
Posticum, together with the cramp-marks on the beams, leave no reasonable doubt as to the way in which
the ceiling was arranged.1 There can be little doubt but that the insides of these coffers were painted in a
similar manner to those of the Propylaea, given in Plates XXIV. and XXV.2 The ceiling of the Pronaos,
which has entirely disappeared, was no doubt almost an exact counterpart of that of the Posticum.

Plate XVI. gives a transverse and a longitudinal section through the Posticum of the Parthenon.

The restoration of the ceiling is in accordance with the previous plate. In the restoration of the
timbers of the roof I have been guided by the recesses remaining in the back walls of the western
pediment, which were clearly intended for the insertion of the main supports of the roof. I have suggested
in the plate that these were huge purlins or longitudinal beams of timber, but the great size of the above-
mentioned recesses makes it not improbable, as has been already mentioned in Chap. II. page 14, that
they were of marble; and we may further presume that there were no framed trusses of timber except in
the Naos. In the Temple of Theseus (see Plate XXXV.) similar recesses are seen, but of so much smaller
a size, while the length of bearing is even greater than in the Parthenon, that it is plain that
timber must have been the material there provided.

The plumbs which are given in this plate scarcely differ from those actually taken, but the small
irregularities which have arisen from horizontal shifts have been corrected.

The frieze has generally been constructed hollow, thereby economising material, and relieving the
architrave from unnecessary weight. The central part of the tympanum, which is formed of single stones
in height, has been constructed in the same way, and is connected with the backing by strong iron cramps.

1 The length and breadth of the coffers of the ceiling of the peristyles 3.5 respectively, measured from centre to centre,
in front of the Pronaos and Posticum seem to have been about 3.7 and 2 On the smaller coffer traces of a honeysuckle were visible.