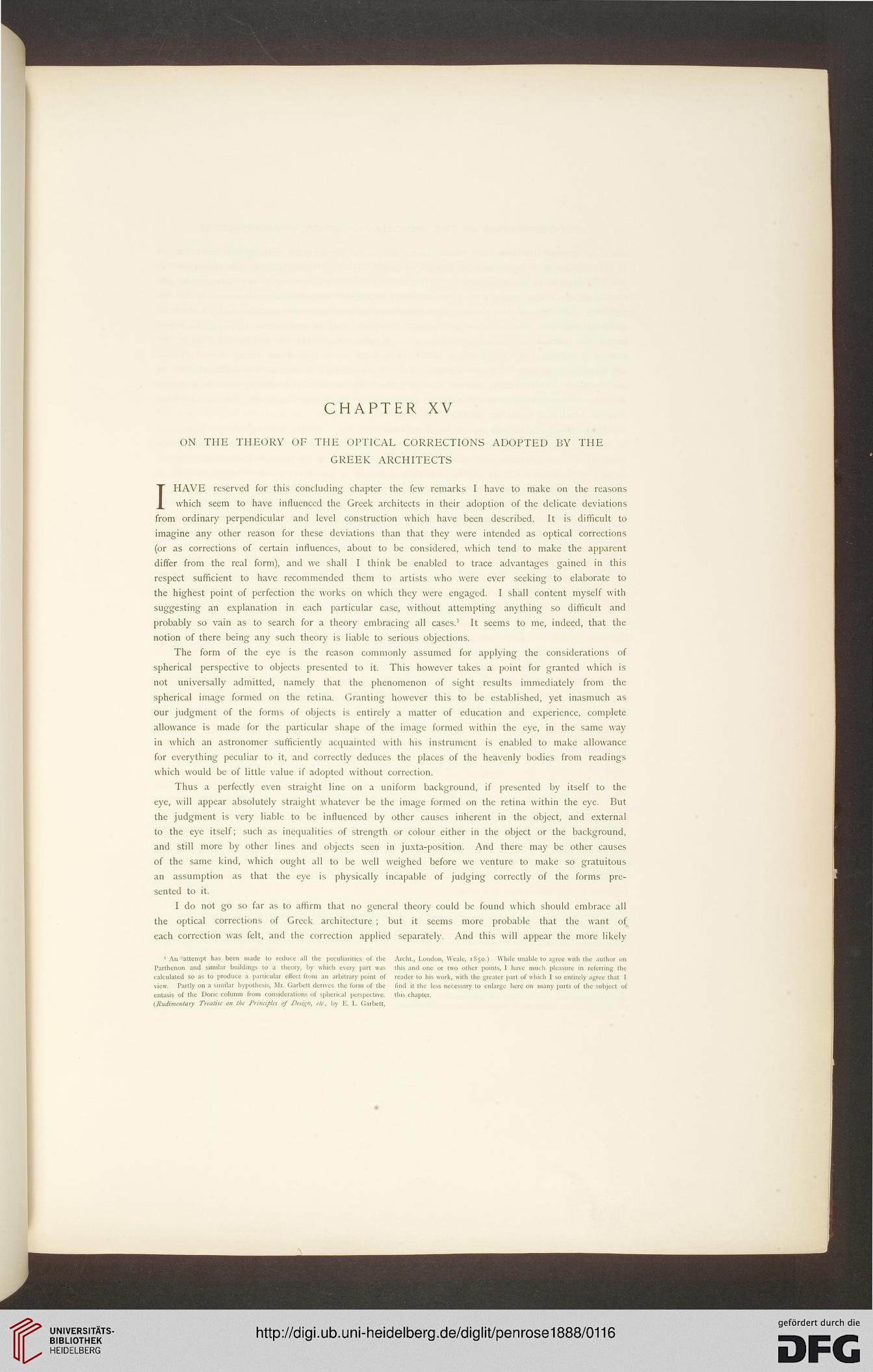 ON THE THEORY OF THE OPTICAL CORRECTIONS ADOPTED BY THE

I HAVE reserved for this concluding- chapter the few remarks I have to make on the reasons
which seem to have influenced the Greek architects in their adoption of the delicate deviations
from ordinary perpendicular and level construction which have been described. It is difficult to
imagine any other reason for these deviations than that they were intended as optical corrections
(or as corrections of certain influences, about to be considered, which tend to make the apparent
differ from the real form), and we shall I think be enabled to trace advantages gained in this
respect sufficient to have recommended them to artists who were ever seeking to elaborate to
the highest point of perfection the works on which they were engaged. I shall content myself with
suggesting an explanation in each particular case, without attempting anything so difficult and
probably so vain as to search for a theory embracing all cases.1 It seems to me, indeed, that the
notion of there being any such theory is liable to serious objections.

The form of the eye is the reason commonly assumed for applying the considerations of
spherical perspective to objects presented to it. This however takes a point for granted which is
not universally admitted, namely that the phenomenon of sight results immediately from the
spherical image formed on the retina. Granting however this to be established, yet inasmuch as
our judgment of the forms of objects is entirely a matter of education and experience, complete
allowance is made for the particular shape of the image formed within the eye, in the same way
in which an astronomer sufficiently acquainted with his instrument is enabled to make allowance
for everything peculiar to it, and correctly deduces the places of the heavenly bodies from readings
which would be of little value if adopted without correction.

Thus a perfectly even straight line on a uniform background, if presented by itself to the
eye, will appear absolutely straight whatever be the image formed on the retina within the eye. But
the judgment is very liable to be influenced by other causes inherent in the object, and external
to the eye itself; such as inequalities of strength or colour either in the object or the background,
and still more by other lines and objects seen in juxta-position. And there may be other causes
of the same kind, which ought all to be well weighed before we venture to make so gratuitous
an assumption as that the eye is physically incapable of judging correctly of the forms pre-
sented to it.

I do not go so far as to affirm that no general theory could be found which should embrace all
the optical corrections of Greek architecture ; but it seems more probable that the want of
each correction was felt, and the correction applied separately. And this will appear the more likely

1 An attempt has been made to reduce all the peculiarities of the Archt, London, Weale, 1850.) While unable to agree with the author on

Parthenon and similar buildings to a theory, by which every part was this and one or two other points, I have much pleasure in referring the

calculated so as to produce a particular effect from an arbitrary point of reader to his work, with the greater part of which I so entirely agree that I

view. Partly on a similar hypothesis, Mr. Garbett derives the form of the find it the less necessary to enlarge here on many parts of the subject of

entasis of the Doric column from considerations of spherical perspective, this chapter.
{Rudimentary Treatise on Ike Principles of Design, ete, by E. L. Garbett,