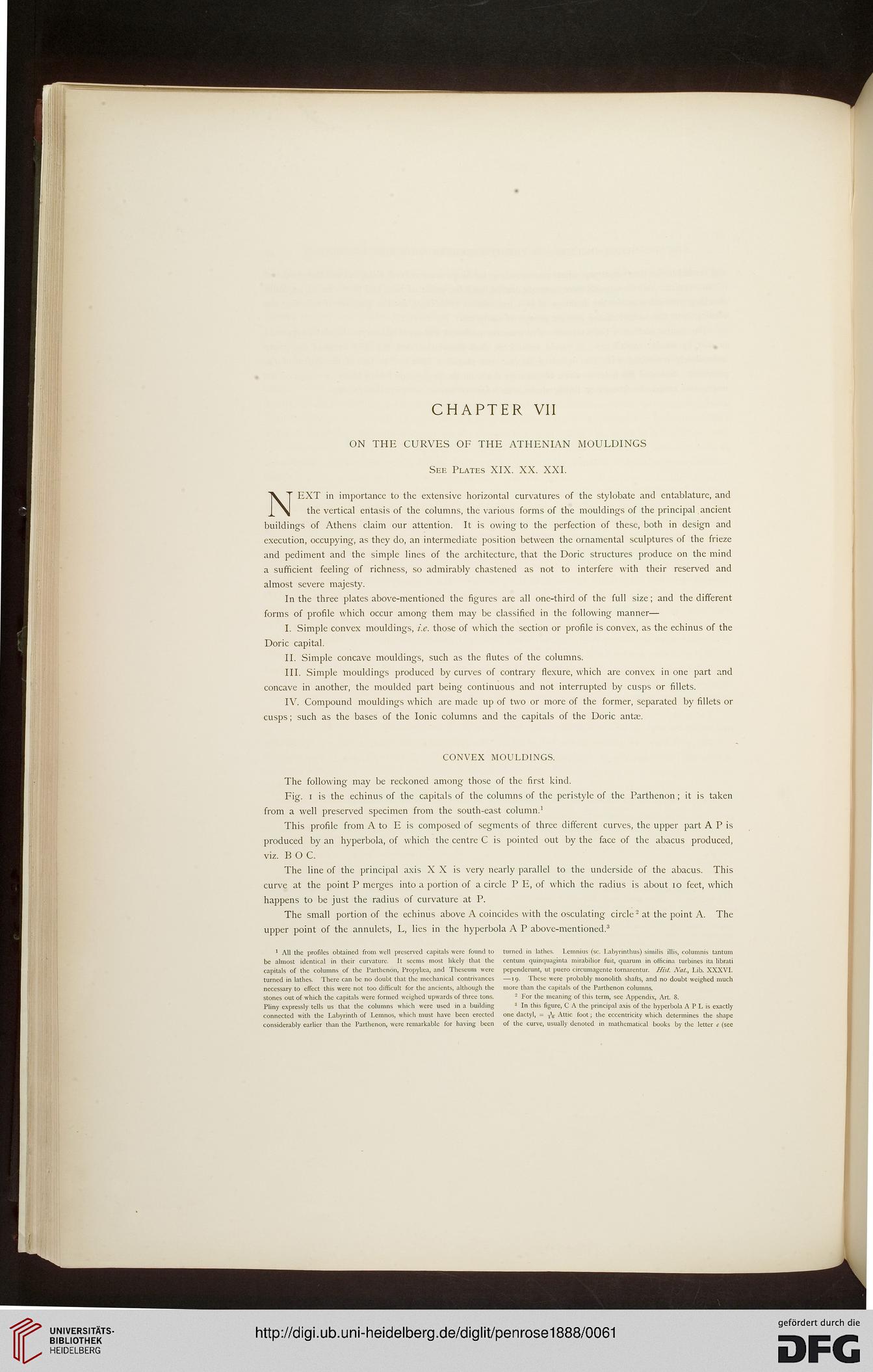 ON THE CURVES OF THE ATHENIAN MOULDINGS
See Plates XIX. XX. XXI.

NEXT in importance to the extensive horizontal curvatures of the stylobate and entablature, and
the vertical entasis of the columns, the various forms of the mouldings of the principal ancient
buildings of Athens claim our attention. It is owing to the perfection of these, both in design and
execution, occupying, as they do, an intermediate position between the ornamental sculptures of the frieze
and pediment and the simple lines of the architecture, that the Doric structures produce on the mind
a sufficient feeling of richness, so admirably chastened as not to interfere with their reserved and
almost severe majesty.

In the three plates above-mentioned the figures are all one-third of the full size; and the different
forms of profile which occur among them may be classified in the following manner—

I. Simple convex mouldings, i.e. those of which the section or profile is convex, as the echinus of the
Doric capital.

II. Simple concave mouldings, such as the flutes of the columns.

III. Simple mouldings produced by curves of contrary flexure, which are convex in one part and
concave in another, the moulded part being continuous and not interrupted by cusps or fillets.

IV. Compound mouldings which are made up of two or more of the former, separated by fillets or
cusps; such as the bases of the Ionic columns and the capitals of the Doric antae.

The following may be reckoned among those of the first kind.

Fig. I is the echinus of the capitals of the columns of the peristyle of the Parthenon ; it is taken
from a well preserved specimen from the south-east column.1

This profile from A to E is composed of segments of three different curves, the upper part A P is
produced by an hyperbola, of which the centre C is pointed out by the face of the abacus produced,
viz. B O C.

The line of the principal axis X X is very nearly parallel to the underside of the abacus. This
curve at the point P merges into a portion of a circle P E, of which the radius is about 10 feet, which
happens to be just the radius of curvature at P.

The small portion of the echinus above A coincides with the osculating circle" at the point A. The
upper point of the annulets, L, lies in the hyperbola A P above-mentioned.3

: All the profiles obtained from well preserved capitals were found to
be almost identical in their curvature. It seems most likely that the
capitals of the columns of the Parthenon, Propyltea, and Theseum were
turned in lathes. There can be no doubt that the mechanical contrivances
necessary to effect this were not too difficult for the ancients, although the
stones out of which the capitals were formed weighed upwards of three tons.
Pliny expressly tells us that the columns which were used in a building
connected with the Labyrinth of Lemnos, which must have been erected
considerably earlier than the Parthenon, were remarkable for having been

3 In this figure, C A the principal axis of the hyperbola A P L is exactly
one dactyl, = T\ Attic foot; the eccentricity which determines the shape
of the curve, usually denoted in mathematical books by the letter e {see