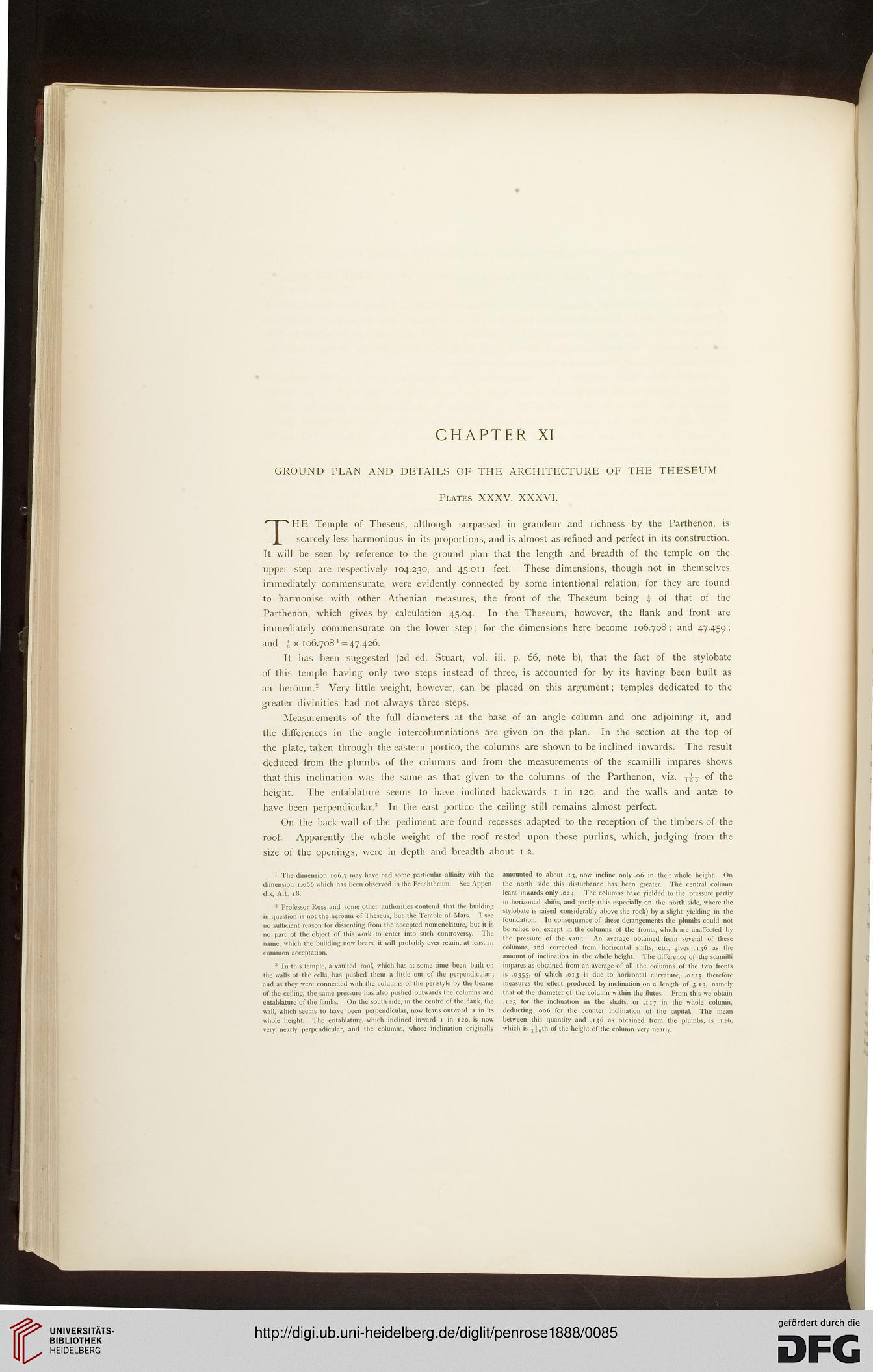 GROUND PLAN AND DETAILS OF THE ARCHITECTURE OF THE THESEUM

THE Temple of Theseus, although surpassed in grandeur and richness by the Parthenon, is
scarcely less harmonious in its proportions, and is almost as refined and perfect in its construction.
It will be seen by reference to the ground plan that the length and breadth of the temple on the
upper step are respectively 104.230, and 45.011 feet. These dimensions, though not in themselves
immediately commensurate, were evidently connected by some intentional relation, for they are found
to harmonise with other Athenian measures, the front of the Theseum being I of that of the
Parthenon, which gives by calculation 45.04. In the Theseum, however, the flank and front are
immediately commensurate on the lower step; for the dimensions here become 106.708; and 47.459;
and ;} x 106.708 l =47.426.

It has been suggested (2d ed. Stuart, vol. iii. p. 66, note b), that the fact of the stylobate
of this temple having only two steps instead of three, is accounted for by its having been built as
an heroum.2 Very little weight, however, can be placed on this argument; temples dedicated to the
greater divinities had not always three steps.

Measurements of the full diameters at the base of an angle column and one adjoining it, and
the differences in the angle intercolumniations are given on the plan. In the section at the top of
the plate, taken through the eastern portico, the columns are shown to be inclined inwards. The result
deduced from the plumbs of the columns and from the measurements of the scamilli impares shows
that this inclination was the same as that given to the columns of the Parthenon, viz. T^ of the
height. The entablature seems to have inclined backwards 1 in 120, and the walls and antae to
have been perpendicular."' In the east portico the ceiling still remains almost perfect.

On the back Avail of the pediment are found recesses adapted to the reception of the timbers of the
roof. Apparently the whole weight of the roof rested upon these purlins, which, judging from the
size of the openings, were in depth and breadth about 1.2.

1 The dimension 106.7 maY 'iave nad some particular affinity with the
dimension 1.066 which has been observed in the Erechtheum. See Appen-
dix, Art. 18.

- Professor Ross and some other authorities contend that the building
in question is not the heroum of Theseus, but the Temple of Mars, I see
no sufficient reason for dissenting from the accepted nomenclature, but it is
no part of the object of this work to enter into such controversy. The
name, which the building now bears, it will probably ever retain, at least in
common acceptation.

3 In this temple, a vaulted roof, which has at some time been built on
the walls of the cella, has pushed them a little out of the perpendicular;
and as they were connected with the columns of the peristyle by the beams
of the ceiling, the same pressure has also pushed outwards the columns and
entablature of the flanks. On the south side, in the centre of the flank, the
wall, which seems to have been perpendicular, now leans outward ,1 in its
whole height. The entablature, which inclined inward 1 in 120, is now
very nearly perpendicular, and the columns, whose inclination originally

amounted to about .13, now incline only .06 in their whole height. On
the north side this disturbance has been greater. The central column
leans inwards only .024. The columns have yielded to the pressure partly
in horizontal shifts, and partly {this especially on the north side, where the
stylobate is raised considerably above the rock) by a slight yielding in the
foundation. In consequence of these derangements the plumbs could not
be relied on, except in the columns of the fronts, which are unaffected by
the pressure of the vault. An average obtained from several of these
columns, and corrected from horizontal shifts, etc., gives .136 as the
amount of inclination in the whole height. The difference of the scamilli
impares as obtained from an average of all the columns of the two fronts
is '°355j of which .013 is due to horizontal curvature, .0225 therefore
measures the effect produced by inclination on a length of 3.13, namely
that of the diameter of the column within the flutes. From this we obtain
.123 for the inclination in the shafts, or .117 in the whole column,
deducting .006 for the counter inclination of the capital. The mean
between this quantity and .136 as obtained from the plumbs, is .126,
which is x^Tjth of the height of the column very nearly.