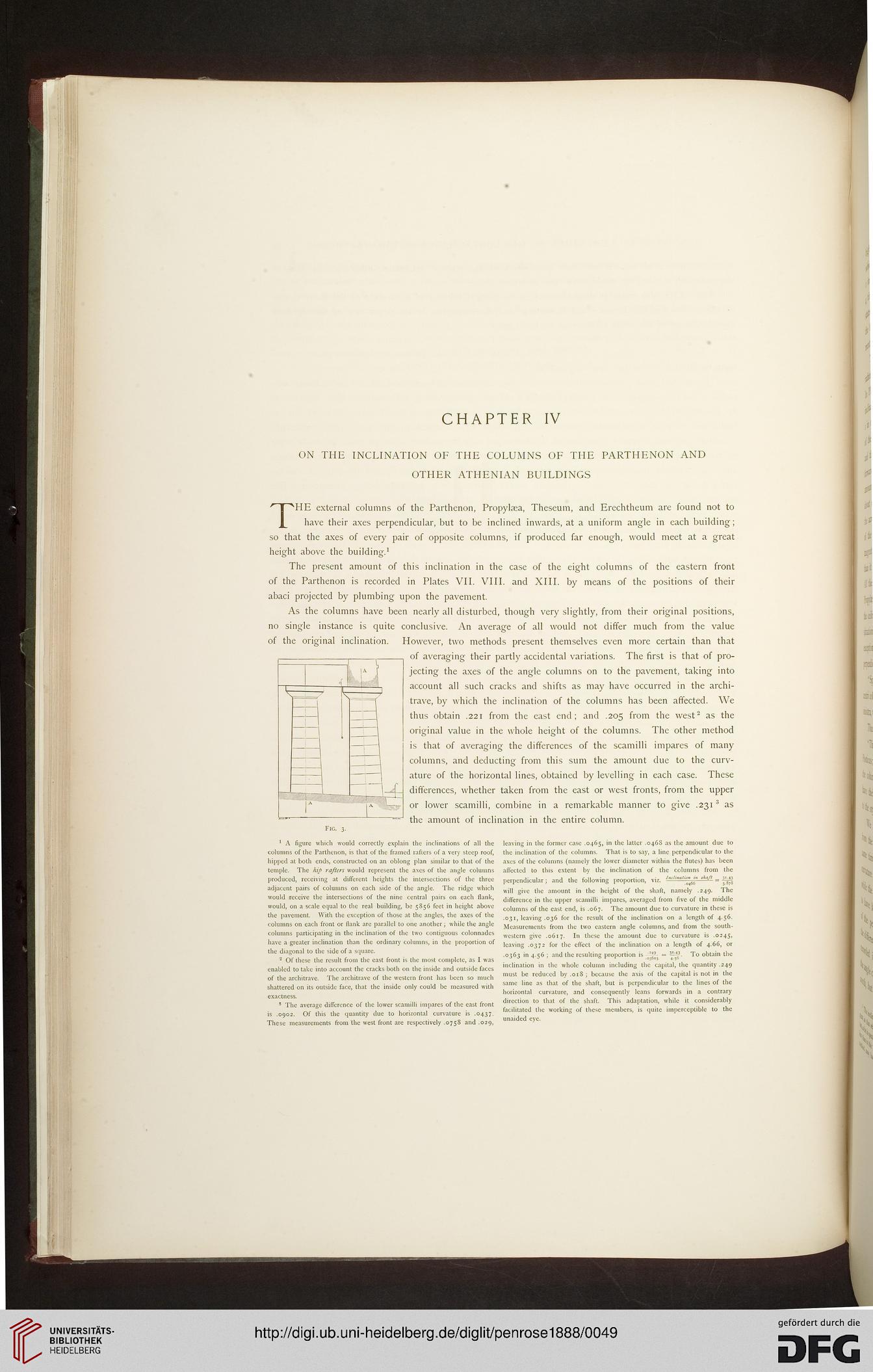 THE external columns of the Parthenon, Propylasa, Theseum, and Erechtheum are found not to
have their axes perpendicular, but to be inclined inwards, at a uniform angle in each building;

so that the axes of every pair of opposite columns, if produced far enough, would meet at a great

height above the building.1

of the Parthenon is recorded in Plates VII. VIII. and XIII. by means of the positions of their

abaci projected by plumbing upon the pavement.

As the columns have been nearly all disturbed, though very slightly, from their original positions,

no single instance is quite conclusive. An average of all would not differ much from the value

of the original inclination. However, two methods present themselves even more certain than that

of averaging their partly accidental variations. The first is that of pro-
jecting the axes of the angle columns on to the pavement, taking into
account all such cracks and shifts as may have occurred in the archi-
trave, by which the inclination of the columns has been affected. We
thus obtain .221 from the east end; and .205 from the west2 as the
original value in the whole height of the columns. The other method
is that of averaging the differences of the scamilli impares of many
columns, and deducting from this sum the amount due to the curv-
ature of the horizontal lines, obtained by levelling in each case. These
differences, whether taken from the east or west fronts, from the upper
or lower scamilli, combine in a remarkable manner to give .231 3 as
the amount of inclination in the entire column.

1 A figure which would correctly explain the inclinations of all the
columns of the Parthenon, is that of the framed rafters of a very steep roof,
hipped at both ends, constructed on an oblong plan similar to that of the
temple. The hip rafters would represent the a\es of the angle columns
produced, receiving at different heights the intersections of the three
adjacent pairs of columns on each side of the angle. The ridge which
would receive the intersections of the nine central pairs on each flank,
would, on a scale equal to the real building, be 5856 feet in height above
the pavement. With the exception of those at the angles, the axes of the
columns on each front or flank are parallel to one another; while the angle
columns participating in the inclinaiion of the two contiguous colonnades
have a greater inclination than the ordinary columns, in the proportion of
the diagonal to the side of a square.

2 Of these the result from the east front is the most complete, as I was
enabled to take into account the cracks both on the inside and outside faces
of the architrave. The architrave of the western front has been so much
shattered on its outside face, that the inside only could be measured with
exactness.

s The average difference of the lower scamilli impares of the east front
is .0902. Of this the quantity due to horizontal curvature is .0437,
These measurements from Ihe west front are respectively .0758 and .029,

leaving in the former case .0465, in the latter .046S as the amount due to
the inclination of the columns. That is to say, a line perpendicular to the
axes of the columns (namely the lower diameter within the flutes) has been
affected to this extent by the inclination of the columns from the
perpendicular; and the following proportion, viz. !"d,n^^™ ,ha/t = |iji|
will give the amount in the height of the shaft, namely .249. The
difference in the upper scamilli impares, averaged from five of the middle
columns of the east end, is .067. The amount due to curvature in these is
.031, leaving .036 for the result of the inclination on a length of 4.56.
Measurements from the two eastern angle columns, and from the south-
western give .0617. In these the amount due to curvature is .0245,
leaving .0372 for the effect of the inclination on a length of 4.66, or
.0363 in 4.56 ; and the resulting proportion is -^™ = ¥^1. To obtain the
inclination in the whole column including the capital, the quantity.249
must be reduced by. 018; because the axis of the capital is not in the
same line as that of the shaft, but is perpendicular to the lines of the
horizontal curvature, and consequently leans forwards in a contrary
direction to that of the shaft. This adaptation, while it considerably
facilitated the working of these members, is quite imperceptible to the
unaided eye.