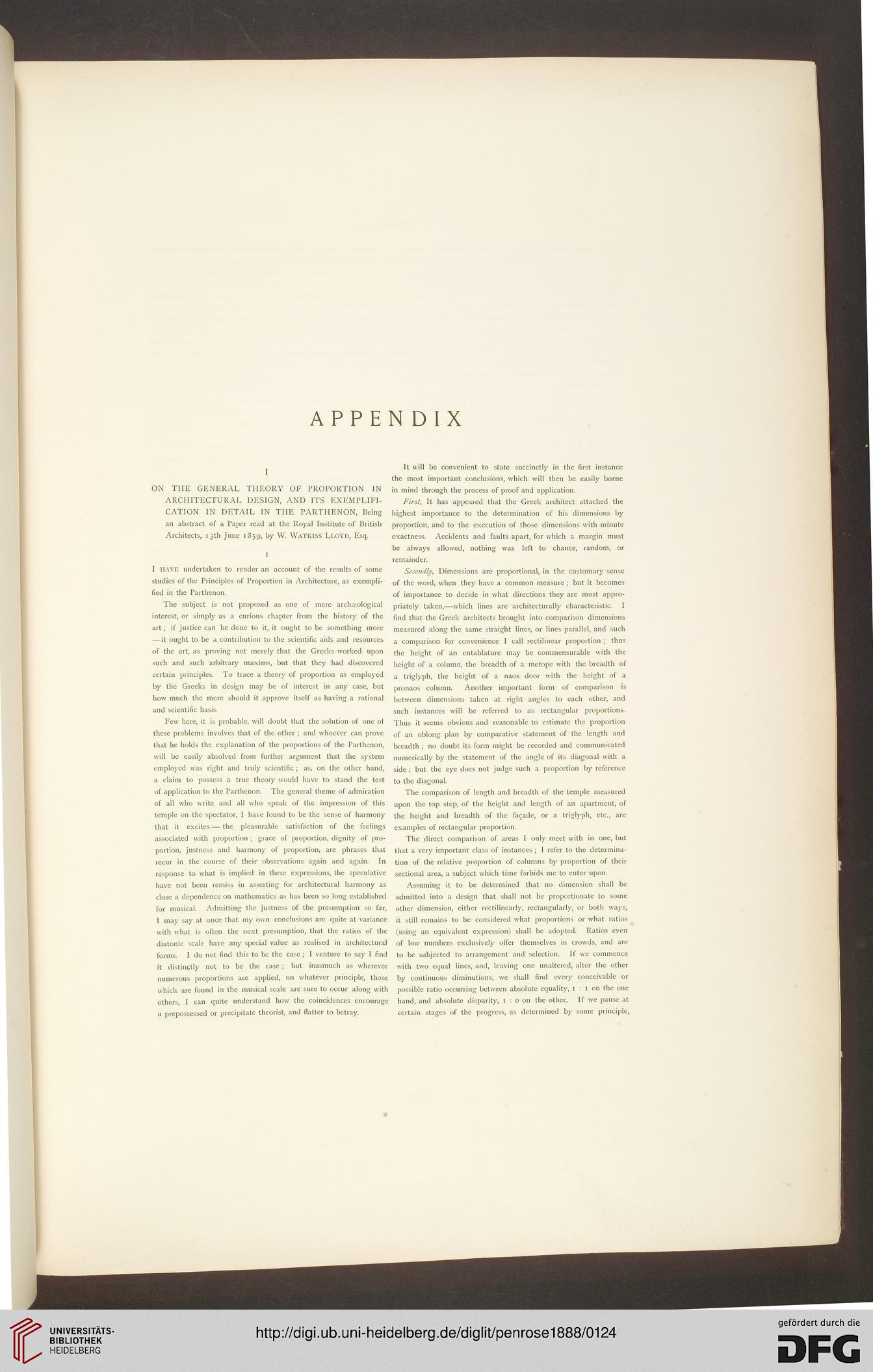 ON THE GENERAL THEORY OF PROPORTION IN
ARCHITECTURAL DESIGN, AND ITS EXEMPLIFI-
CATION IN DETAIL IN THE PARTHENON, Being
an abstract of a Paper read at the Royal Institute of British
Architects, 13th June 1S59, by W. WATKISS Lloyd, Esq.

I HAVE undertaken to render an account of the results of some
studies of the Principles of Proportion in Architecture, as exempli-
fied in the Parthenon.

The subject is not proposed as one of mere archaeological
interest, or simply as a curious chapter from the history of the
art; if justice can be done to it, it ought to be something more
■—it ought to be a contribution to the scientific aids and resources
of the art, as proving not merely that the Greeks worked upon
such and such arbitrary maxims, but that they had discovered
certain principles. To trace a theory of proportion as employed
by the Greeks in design may be of interest in any case, but
how much the more should it approve itself as having a rational
and scientific basis.

Few here, it is probable, will doubt that the solution of one of
these problems involves that of the other ; and whoever can prove
that he holds the explanation of the proportions of the Parthenon,
will be easily absolved from further argument that the system
employed was right and truly scientific ; as, on the other hand,
a claim to possess a true theory would have to stand the test
of application to the Parthenon. The general theme of admiration
of all who write and all who speak of the impression of this
temple on the spectator, I have found to be the sense of harmony
that it excites — the pleasurable satisfaction of the feelings
associated with proportion ; grace of proportion, dignity of pro-
portion, justness and harmony of proportion, arc phrases that
recur in the course of their observations again and again. In
response to what is implied in these expressions, the speculative
have not been remiss in asserting for architectural harmony as
close a dependence on mathematics as has been so long established
for musical. Admitting the justness of the presumption so far,
I may say at once that my own conclusions are quite at variance
with what is often the next presumption, that the ratios of the
diatonic scale have any special value as realised in architectural
forms. I do not find this to be the case ; I venture to say I find
it distinctly not to be the case; but inasmuch as wherever
numerous proportions are applied, on whatever principle, those
which are found in the musical scale are sure to occur along with
others, I can quite understand how the coincidences encourage
a prepossessed or precipitate theorist, and flatter to betray.

It will be convenient to state succinctly in the first instance
the most important conclusions, which will then be easily borne
in mind through the process of proof and application.

First, It has appeared that the Greek architect attached the
highest importance to the determination of his dimensions by
proportion, and to the execution of those dimensions with minute
exactness. Accidents and faults apart, for which a margin must
be always allowed, nothing was left to chance, random, or
remainder.

Secondly, Dimensions are proportional, in the customary sense
of the word, when they have a common measure ; but it becomes
of importance to decide in what directions they are most appro-
priately taken,—which lines are architecturally characteristic. I
find that the Greek architects brought into comparison dimensions
measured along the same straight lines, or lines parallel, and such
a comparison for convenience I call rectilinear proportion ; thus
the height of an entablature may be commensurable with the
height of a column, the breadth of a metope with the breadth of
a triglyph, the height of a naos door with the height of a
pronaos column. Another important form of comparison is
between dimensions taken at right angles to each other, and
such instances will be referred to as rectangular proportions.
Thus it seems obvious and reasonable to estimate the proportion
of an oblong plan by comparative statement of the length and
breadth ; no doubt its form might be recorded and communicated
numerically by the statement of the angle of its diagonal with a
side ; but the eye does not judge such a proportion by reference
to the diagonal.

The direct comparison of areas I only meet with in one, but
that a very important class of instances ; I refer to the determina-
tion of the relative proportion of columns by proportion of their
sectional area, a subject which time forbids me to enter upon.

Assuming it to be determined that no dimension shall be
admitted into a design that shall not be proportionate to some
other dimension, either rectilinearly, rectangularly, or both ways,
it still remains to be considered what proportions or what ratios
(using an equivalent expression) shall be adopted. Ratios even
of low numbers exclusively offer themselves in crowds, and are
to be subjected to arrangement and selection. If we commence
with two equal lines, and, leaving one unaltered, alter the other
by continuous diminutions, we shall find every conceivable or
possible ratio occurring between absolute equality, 1 : 1 on the one
hand, and absolute disparity, 1 : o on the other. If we pause at
certain stages of the progress, as determined by some principle,