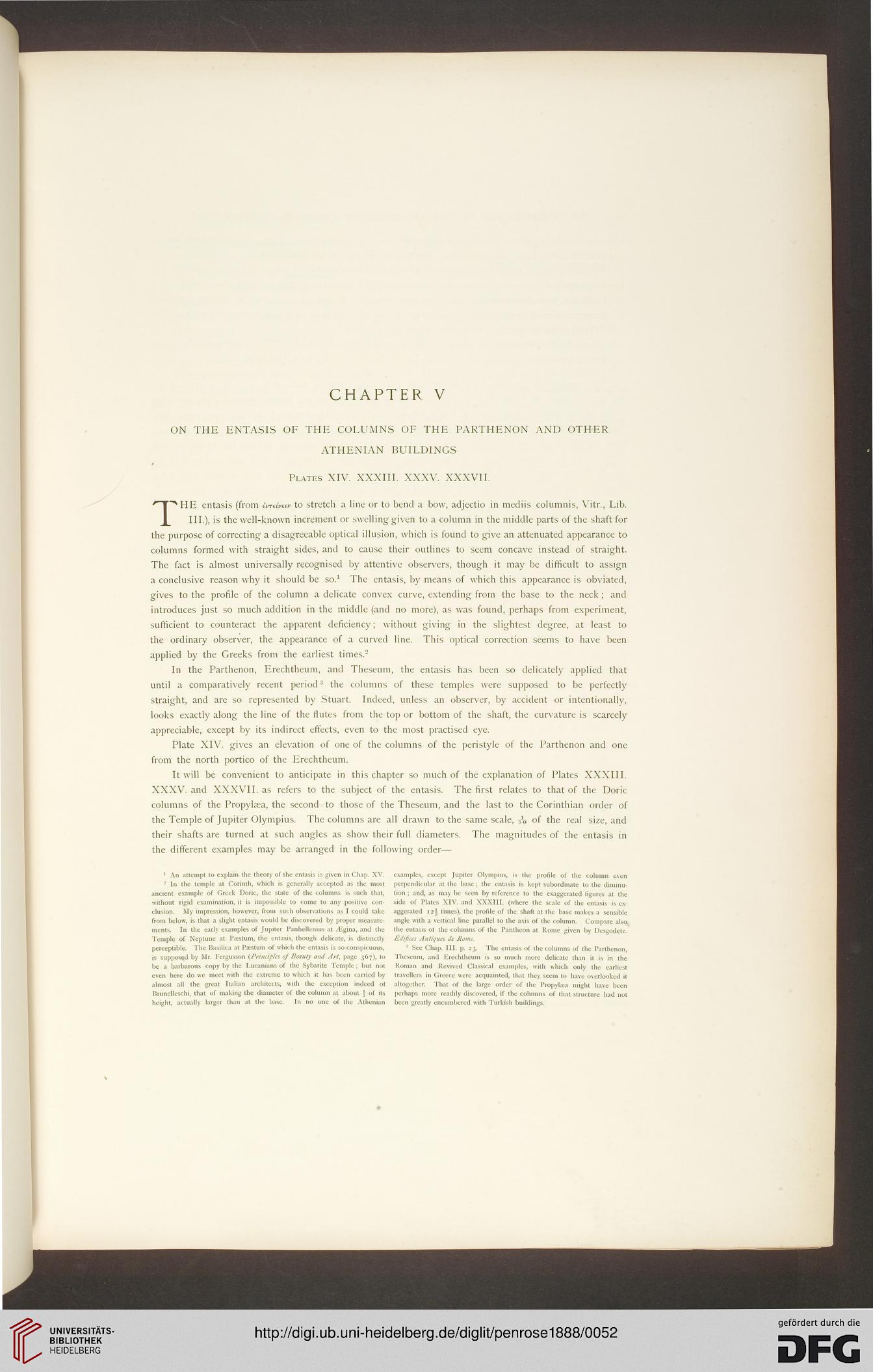 ON THE ENTASIS OF THE COLUMNS OF THE PARTHENON AND OTHER

r I^HE entasis (from ivreiveiv to stretch a line or to bend a bow, adjectio in mediis columnis, Vitr., Lib.
III.), is the well-known increment or swelling given to a column in the middle parts of the shaft for
the purpose of correcting a disagreeable optical illusion, which is found to give an attenuated appearance to
columns formed with straight sides, and to cause their outlines to seem concave instead of straight.
The fact is almost universally recognised by attentive observers, though it may be difficult to assign
a conclusive reason why it should be so.1 The entasis, by means of which this appearance is obviated,
gives to the profile of the column a delicate convex curve, extending from the base to the neck; and
introduces just so much addition in the middle (and no more), as was found, perhaps from experiment,
sufficient to counteract the apparent deficiency; without giving- in the slightest degree, at least to
the ordinary observer, the appearance of a curved line. This optical correction seems to have been
applied by the Greeks from the earliest times.2

In the Parthenon, Erechtheum, and Theseum, the entasis has been so delicately applied that
until a comparatively recent period3 the columns of these temples were supposed to be perfectly
straight, and are so represented by Stuart. Indeed, unless an observer, by accident or intentionally,
looks exactly along the line of the flutes from the top or bottom of the shaft, the curvature is scarcely
appreciable, except by its indirect effects, even to the most practised eye.

Plate XIV. gives an elevation of one of the columns of the peristyle of the Parthenon and one
from the north portico of the Erechtheum.

It will be convenient to anticipate in this chapter so much of the explanation of Plates XXXIII.
XXXV. and XXXVII. as refers to the subject of the entasis. The first relates to that of the Doric
columns of the Propylsea, the second to those of the Theseum, and the last to the Corinthian order of
the Temple of Jupiter Olympius. The columns are all drawn to the same scale, ^ of the real size, and
their shafts are turned at such angles as show their full diameters. The magnitudes of the entasis in
the different examples may be arranged in the following order—

1 An attempt to explain the theory of the entasis is given in Chap. XV.

- In the temple at Corinth, which is generally accepted as the most
anaent example of Greek Doric, the state of the columns is such that,
without rigid examination, it is impossible to come to any positive con-
clusion. My impression, however, from such observations as I could take
from below, is that a slight entasis would be discovered by proper measure-
ments. In the early examples of Jupiter Panhellenius at ^Egina, and the
Temple of Neptune at P^stum, the entasis, though delicate, is distinctly
perceptible. The Basilica at Pactum of which the entasis is so conspicuous,
is supposed by Mr. Fergusson (Principles of Beauty and Art, page 367), to
be a. barbarous copy by the Lucanians of the Sybarite Temple; but not
even here do we meet with the extreme to which it lias been carried by
almost all the great Italian architects, with the exception indeed ol
Brunelleschi, that of making the diameter of the column at about £ of its
height, actually larger than at the base. In no one of the Athenian

examples, except Jupiter Olympius, is the profile of the column even
perpendicular at the base; the entasis is kept subordinate to the diminu-
tion ; and, as may be seen by reference to the exaggerated figures at the
side of Plates XIV. and XXXIII. (where the scale of the entasis is ex-
aggerated 12^ times), the profile of the shaft at the base makes a sensible
angle with a vertical line parallel to the axis of the column. Compare also
the entasis ot the columns of the Pantheon at Rome given by Desgodetz.
Edifices Antiques de Rome.

3 See Chap. Ill, p. 23. The entasis of the columns of the Parthenon,
Theseum, and Erechtheum is so much more delicate than it is in the
Roman and Revived Classical examples, with which only the earliest
travellers in Greece were acquainted, that they seem to have overlooked it
altogether. That of the large order of the Propytaa might have been
perhaps more readily discovered, if the columns of that structure had not
been greatly encumbered with Turkish buildings.