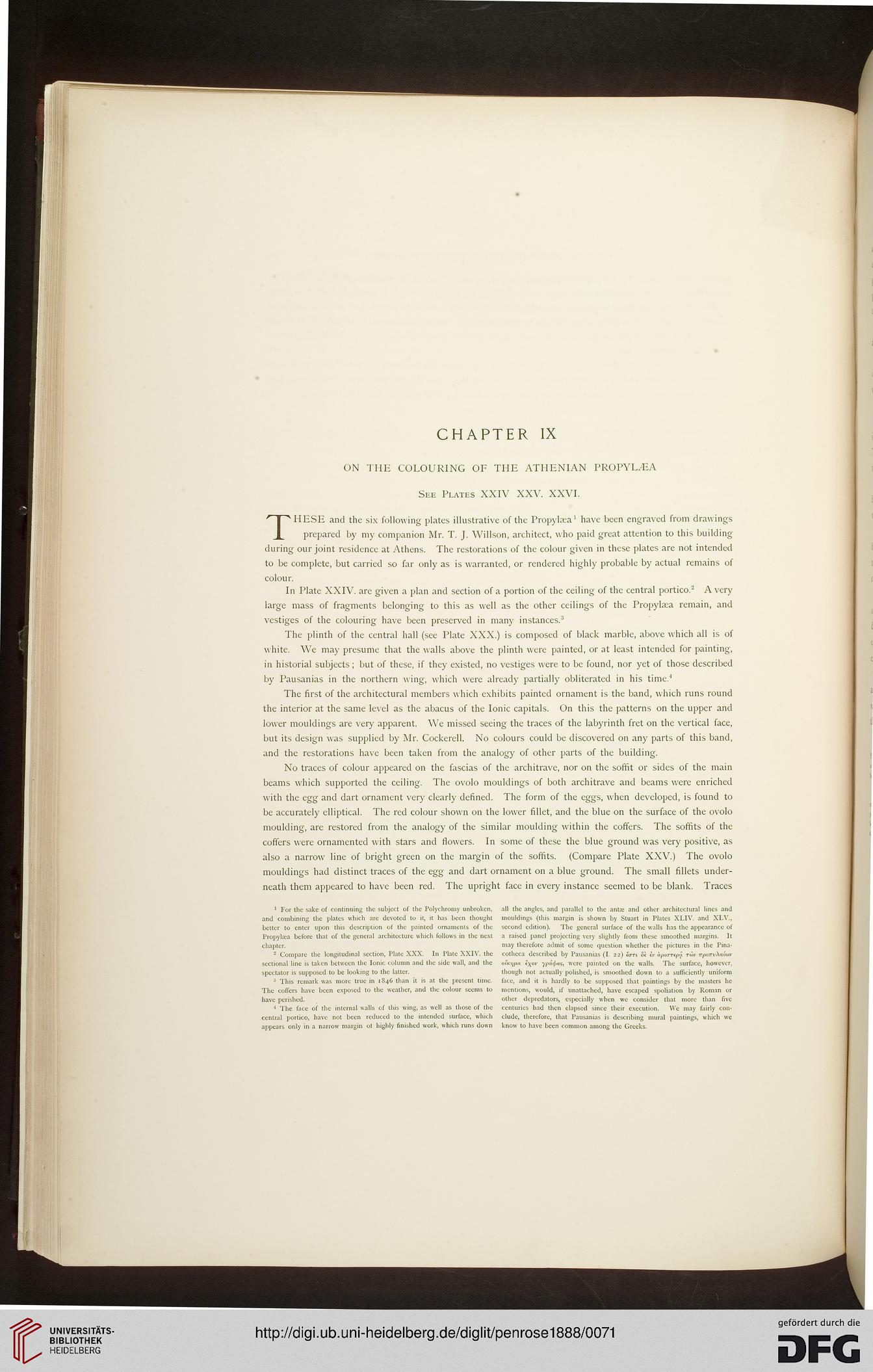 ON THE COLOURING OF THE ATHENIAN PROPYL.EA

during our lint resfdence at Athens. The restorations of the colour given in these plates are not .tended

nimpSe, but earned so far only as is warranted, or rendered highly probable by actual remains of

"'"in Plate XXIV. are given a plan and section of a portion of the ceiling of the central portico.' A very
iarge ma!: of fragments" belonging to this as well as the other ceilings of the Propyls remam, and
vestiges of the colouring have been preserved in many instances.3

The first of the architectural members which exhibits painted ornament ,s the band, which runs round
the interior at the same level as the abacus of the Ionic capita!, On this the patterns on the upper and
lower mouldings are very apparent. We missed seeing the traces of the labyrinth fret on t e ver. 1 ac,
but its design was supplied by Mr. Cockerel,. No colours could be discovered on any parts of this band,
and the restorations have been taken from the analogy of other parts of the building.

No traces of colour appeared on the fascias of the architrave, nor on the soffit or s.des of the mam
beams vhch supported the ceiling. The ovolo mouldings of both architrave and beams were ennche
w 1 he ,gg and dart ornament very clearly defined. The form of the eggs, when developed, is found
e accurately elliptical. The red colour shown on the .ower fillet, and the blue on the surface o£ecvoto
moulding, I restored from the analogy of the similar moulding within the coffers. The soffits of the
ofte s w re ornamented with stars and flowers. In some of these the blue ground was very positive,
^ rlow line of bright green on the margin of the soffits (Compare Plate XXV.) Tec ^
mouldings had distinct traces of the egg and dart ornament on a blue ground, ^e sma. fits unde
neath them appeared to have been red. The upright face in every instance seemed to be blank. Traces

• For the sake of continuing the subject of the Polychromy unbroken
and combining the plates which are devoted to it, it has been though
better to enter upon this description of the pa.nted ornaments of the
Propyls before that of the general architecture which follows in the next

P ' This remark was more true in :84c than it ,s at the present t.me.
The coffers have been exposed to the weather, and the colour seems to

central portico, have not been reduced to the intended surface, which
pea s Tn,y in a narrow margin o, high.y finished work, wh.ch runs down

all the angles, and parallel to the ant* and other architectural lines and
mouldings (this margin is shown by Stuart in Plates XLIV. and XLV
second edition). The general surface of the walls has the appearance of
a raised panel projecting very slightly from these smoothed margins. It
may therefore admit of some question whether the pictures in the Fina-
cotheca described by Pausanias (I. 22) im & <* ip^r,pt rm ^mrvA..™
o?™< Ivov vpa^as, were painted on the walls. The surface, however,
though not actually polished, is smoothed down to a sufficiently uniform
face, and it is hardly to be supposed that paintings by the masters he
mentions, would, if unattached, have escaped spoliation by Roman or
other depredators, especially when we consider that more than live
centuries had then elapsed since their execution. We may fairly con-
clude, therefore, that Pausanias is describing mural paintings, which we
know to have been common among the Greeks.