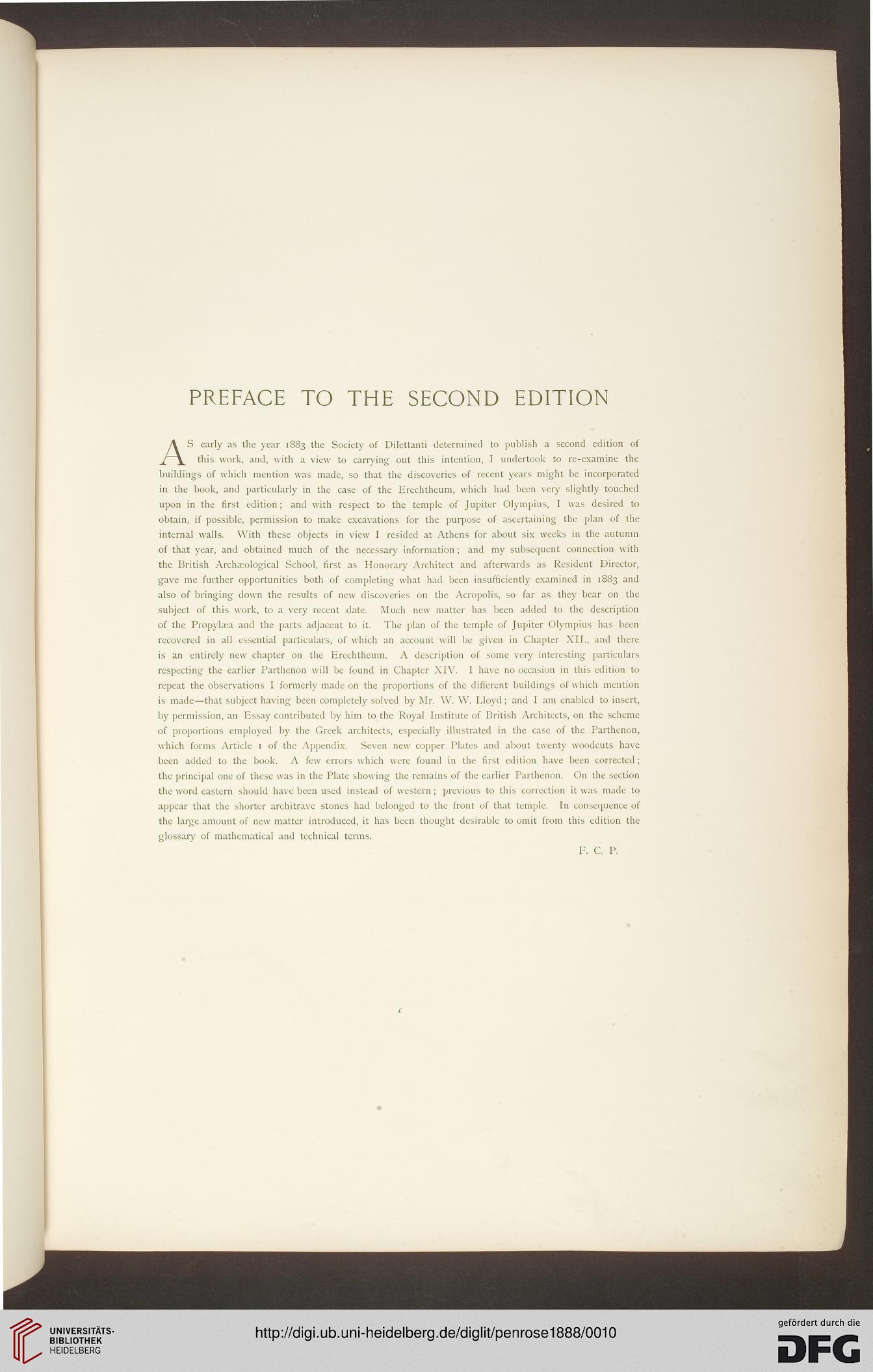 Information about OCR text
PREFACE TO THE SECOND EDITION

AS early as the year 1883 the Society of Dilettanti determined to publish a second edition of
this work, and, with a view to carrying out this intention, I undertook to re-examine the
building's of which mention was made, so that the discoveries of recent years might be incorporated
in the book, and particularly in the case of the Erechtheum, which had been very slightly touched
upon in the first edition; and with respect to the temple of Jupiter Olympius, I was desired to
obtain, if possible, permission to make excavations for the purpose of ascertaining the plan of the
internal walls. With these objects in view I resided at Athens for about six weeks in the autumn
of that year, and obtained much of the necessary information ; and my subsequent connection with
the British Archaeological School, first as Honorary Architect and afterwards as Resident Director,
gave me further opportunities both of completing what had been insufficiently examined in 1883 and
also of bringing down the results of new discoveries on the Acropolis, so far as they bear on the
subject of this work, to a very recent date. Much new matter has been added to the description
of the Propylaea and the parts adjacent to it. The plan of the temple of Jupiter Olympius has been
recovered in all essential particulars, of which an account will be given in Chapter XII., and there
is an entirely new chapter on the Erechtheum. A description of some very interesting particulars
respecting the earlier Parthenon will be found in Chapter XIV. I have no occasion in this edition to
repeat the observations I formerly made on the proportions of the different buildings of which mention
is made—that subject having been completely solved by Mr. W. W. Lloyd ; and I am enabled to insert,
by permission, an Essay contributed by him to the Royal Institute of British Architects, on the scheme
of proportions employed by the Greek architects, especially illustrated in the case of the Parthenon,
which forms Article 1 of the Appendix. Seven new copper Plates and about twenty woodcuts have
been added to the book. A few errors which were found in the first edition have been corrected;
the principal one of these was in the Plate showing the remains of the earlier Parthenon. On the section
the word eastern should have been used instead of western ; previous to this correction it was made to
appear that the shorter architrave stones had belonged to the front of that temple. In consequence of
the large amount of new matter introduced, it has been thought desirable to omit from this edition the
glossary of mathematical and technical terms.