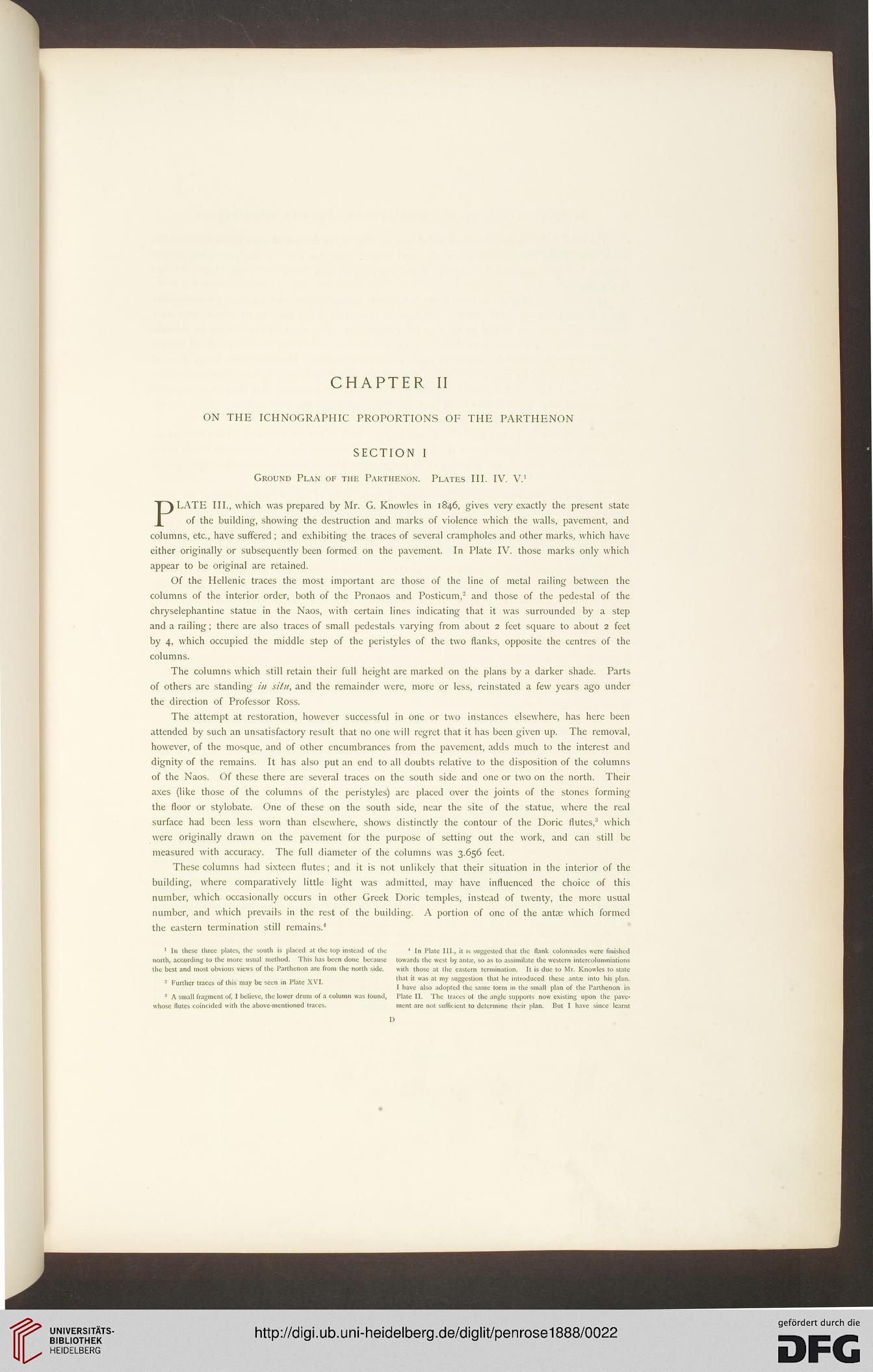 ON THE ICHNOGRAPHIC PROPORTIONS OF THE PARTHENON

PLATE III., which was prepared by Mr. G. Knowles in 1846, gives very exactly the present state
of the building, showing the destruction and marks of violence which the walls, pavement, and
columns, etc., have suffered; and exhibiting the traces of several crampholes and other marks, which have
either originally or subsequently been formed on the pavement. In Plate IV. those marks only which
appear to be original are retained.

Of the Hellenic traces the most important are those of the line of metal railing between the
columns of the interior order, both of the Pronaos and Posticum," and those of the pedestal of the
chryselephantine statue in the Naos, with certain lines indicating that it was surrounded by a step
and a railing; there are also traces of small pedestals varying from about 2 feet square to about 2 feet
by 4, which occupied the middle step of the peristyles of the two flanks, opposite the centres of the
columns.

The columns which still retain their full height are marked on the plans by a darker shade. Parts
of others are standing in situ, and the remainder were, more or less, reinstated a few years ago under
the direction of Professor Ross.

The attempt at restoration, however successful in one or two instances elsewhere, has here been
attended by such an unsatisfactory result that no one will regret that it has been given up. The removal,
however, of the mosque, and of other encumbrances from the pavement, adds much to the interest and
dignity of the remains. It has also put an end to all doubts relative to the disposition of the columns
of the Naos. Of these there are several traces on the south side and one or two on the north. Their
axes (like those of the columns of the peristyles) are placed over the joints of the stones forming
the floor or stylobate. One of these on the south side, near the site of the statue, where the real
surface had been less worn than elsewhere, shows distinctly the contour of the Doric flutes,3 which
were originally drawn on the pavement for the purpose of setting out the work, and can still be
measured with accuracy. The full diameter of the columns was 3.656 feet.

These columns had sixteen flutes; and it is not unlikely that their situation in the interior of the
building, where comparatively little light was admitted, may have influenced the choice of this
number, which occasionally occurs in other Greek Doric temples, instead of twenty, the more usual
number, and which prevails in the rest of the building. A portion of one of the antas which formed
the eastern termination still remains.4

1 In these three plates, the south is placed at the top instead of the 4 In Plate IIP, it is suggested that the flank colonnades were finished

north, according to the more usual method. This has been done because towards the west by antce, so as to assimilate the western intercolumniations

with those at the eastern termination. It is due to Mr. Knowles to state
that it was at my suggestion that he introduced these antai into his plan.

the best and most obvious views of the Parthenon are from the north side.
2 Further traces of this may be seen in Plate XVI.

3 A small fragment of, I believe, the lower drum of a column was tound,
whose flutes coincided with the above-mentioned traces.

I have also adopted the same lorm in the small plan of the Parthenon in
Plate II, The traces of the angle supports now existing upon the pave-
ment are not sufficient to determine their plan. But I have since learnt