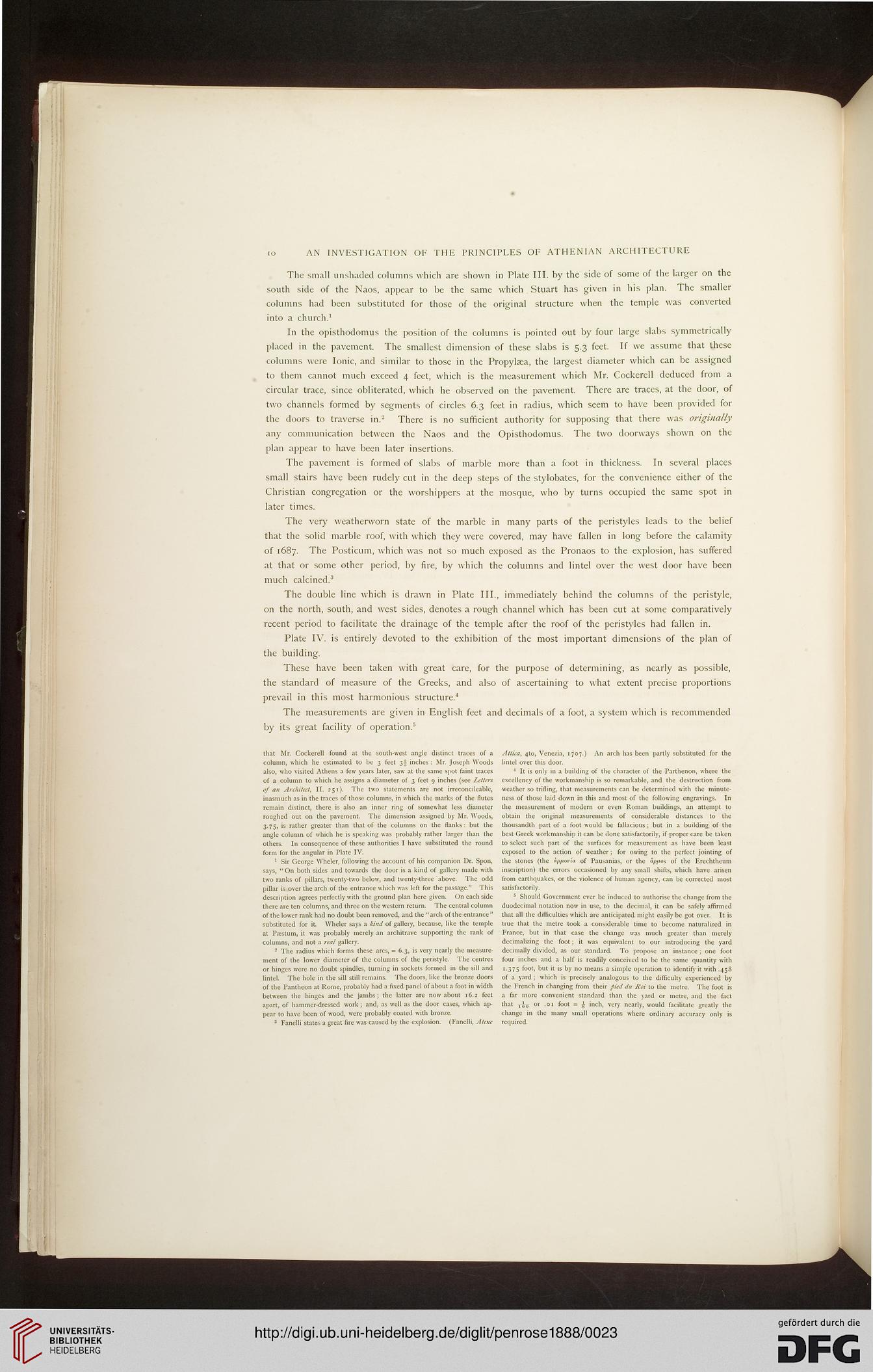 The small unshaded columns which are shown in Plate III. by the side of some of the larger on the
south side of the Naos, appear to be the same which Stuart has given in his plan. The smaller
columns had been substituted for those of the original structure when the temple was converted
into a church.1

In the opisthodomus the position of the columns is pointed out by four large slabs symmetrically
placed in the pavement. The smallest dimension of these slabs is 5.3 feet. If we assume that these
columns were Ionic, and similar to those in the Propylaea, the largest diameter which can be assigned
to them cannot much exceed 4 feet, which is the measurement which Mr. Cockercll deduced from a
circular trace, since obliterated, which he observed on the pavement. There are traces, at the door, of
two channels formed by segments of circles 6.3 feet in radius, which seem to have been provided for
the doors to traverse in.2 There is no sufficient authority for supposing that there was originally
any communication between the Naos and the Opisthodomus. The two doorways shown on the
plan appear to have been later insertions.

The pavement is formed of slabs of marble more than a foot in thickness. In several places
small stairs have been rudely cut in the deep steps of the stylobates, for the convenience either of the
Christian congregation or the worshippers at the mosque, who by turns occupied the same spot in
later times.

The very weatherworn state of the marble in many parts of the peristyles leads to the belief
that the solid marble roof, with which they were covered, may have fallen in long before the calamity
of 1687. The Posticum, which was not so much exposed as the Pronaos to the explosion, has suffered
at that or some other period, by fire, by which the columns and lintel over the west door have been
much calcined.3

The double line which is drawn in Plate III., immediately behind the columns of the peristyle,
on the north, south, and west sides, denotes a rough channel which has been cut at some comparatively
recent period to facilitate the drainage of the temple after the roof of the peristyles had fallen in.

Plate IV. is entirely devoted to the exhibition of the most important dimensions of the plan of
the building.

These have been taken with great care, for the purpose of determining, as nearly as possible,
the standard of measure of the Greeks, and also of ascertaining to what extent precise proportions
prevail in this most harmonious structure.4

The measurements are given in English feet and decimals of a foot, a system which is recommended
by its great facility of operation.5

that Mr. Cockerell found at the south-west angle distinct traces of a
column, which he estimated to be 3 feet 3f inches : Mr. Joseph Woods
also, who visited Athens a few years later, saw at the same spot faint traces
of a column to which he assigns a diameter of 3 feet 9 inches (see Letters
of an Architect, II. 251). The two statements are not irreconcileable,
inasmuch as in the traces of those columns, in which the marks of the flutes
remain distinct, there is also an inner ring of somewhat less diameter
roughed out on the pavement. The dimension assigned by Mr. Woods,
3.75, is rather greater than that of the columns on the flanks: but the
angle column of which he is speaking was probably rather larger than the
others. In consequence of these authorities I have substituted the round
form for the angular in Plate IV.

1 Sir George Wheler, following the account of his companion Dr. Spon,
says, " On both sides and towards the door is a kind of gallery made with
two ranks of pillars, twenty-two below, and twenty-three above. The odd
pillar is over the arch of the entrance which was left for the passage." This
description agrees perfectly with the ground plan here given. On each side
there are ten columns, and three on the western return. The central column
of the lower rank had no doubt been removed, and the "arch of the entrance"
substituted for it. Wheler says a kind of gallery, because, like the temple
at Pactum, it was probably merely an architrave supporting the rank of
columns, and not a real gallery.

2 The radius which forms these arcs, = 6.3, is very nearly the measure-
ment of the lower diameter of the columns of the peristyle. The centres
or hinges were no doubt spindles, turning in sockets formed in the sill and
lintel. The hole in the sill still remains. The doors, like the bronze doors
of the Pantheon at Rome, probably had a fixed panel of about a foot in width
between the hinges and the jambs; the latter are now about 16.2 feet
apart, of hammer-dressed work; and, as well as the door cases, which ap-
pear to have been of wood, were probably coated with bronze.

3 Fanelli states a great fire was caused by the explosion. (Fanclli, Atene

At/ica, 4to, Venezia, 1707.) An arch has been partly substituted for the
lintel over this door.

1 It is only in a building of the character of the Parthenon, where the
excellency of the workmanship is so remarkable, and the destruction from
weather so trifling, that measurements can be determined with the minute-
ness of those laid down in this and most of the following engravings. In
the measurement of modern or even Roman buildings, an attempt to
obtain the original measurements of considerable distances to the
thousandth part of a foot would be fallacious; but in a building of the
best Greek workmanship it can be done satisfactorily, if proper care be taken
to select such part of the surfaces for measurement as have been least
exposed to the action of weather; for owing to the perfect jointing of
the stones (the appovta of Pausanias, or the ap/ios of the Erechtheum
inscription) the errors occasioned by any small shifts, which have arisen
from earthquakes, or the violence of human agency, can be corrected most
satisfactorily.

5 Should Government ever be induced to authorise the change from the
duodecimal notation now in use, to the decimal, it can be safely affirmed
that all the difficulties which are anticipated might easily be got over. It is
true that the metre took a considerable time to become naturalized in
France, but in that case the change was much greater than merely
decimalizing the foot; it was equivalent to our introducing the yard
decimally divided, as our standard. To propose an instance; one foot
four inches and a half is readily conceived to be the same quantity with
1.375 foot, but it is by no means a simple operation to identify it with .458
of a yard; which is precisely analogous to the difficulty experienced by
the French in changing from their pied du Roi to the metre. The foot is
a far more convenient standard than the yard or metre, and the fact
that -^Itj or .01 foot = £ inch, very nearly, would facilitate greatly the
change in the many small operations where ordinary accuracy only is
required.