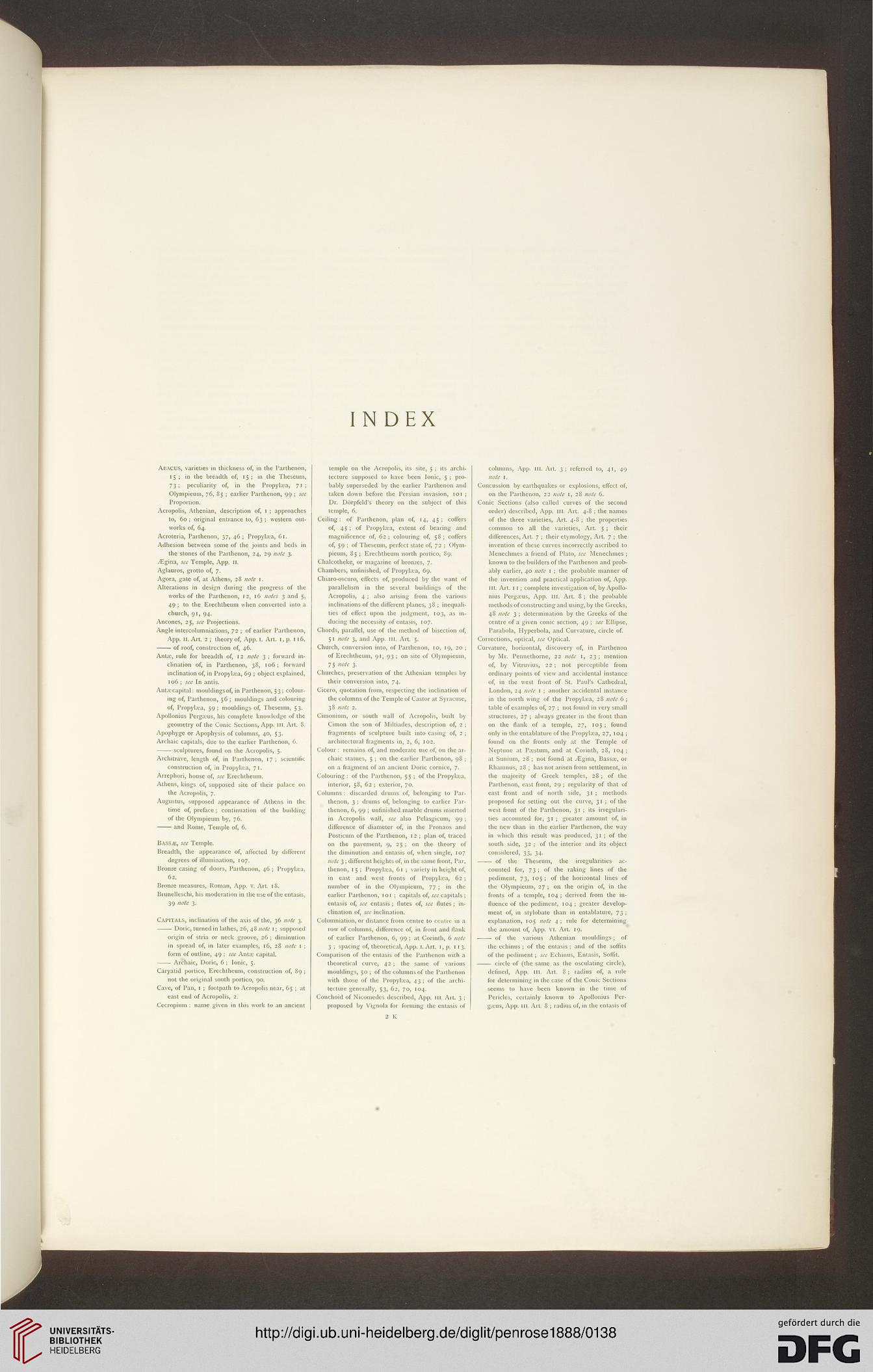 Adhesion between some of the joints and beds in
the stones of the Parthenon, 24, 29 note 3.

Apollonius PergseuSj his complete knowledge of the
geometry of the Conic Sections, App. m. Art. 8.

Archaic capitals, due to the earlier Parthenon, 6.

Architrave, length of, in Parthenon, 17; scientific
construction of, in Propykea, 71.

Athens, kings of, supposed site of their palace on
the Acropolis, 7.

Augustus, supposed appearance of Athens in the
time of, preface; continuation of the building
of the Olympieum by, 76.

Breadth, the appearance of, affected by different

62.
Bronze measures, Roman, App. v. Art 18.
Biunelleschi, his moderation in the use of the entasis,

east end of Acropolis, 2.
Cecropiurn : name given in this work to an ancient

temple on the Acropolis, its site, g ; its archi-
tecture supposed to have been Ionic, 5 ; pro-
bably superseded by the earlier Parthenon and
taken down before the Persian invasion, 101 ;
Dr. Dorpfeld's theory on the subject of this
temple, 6.

Chalcotheke, or magazine of bronzes, 7.

Chiaro-oscuro, effects of, produced by the want of
parallelism in the several buildings of the
Acropolis, 4 ; also arising from the various
inclinations of the different planes, 38 ; inequali-
ties of effect upon the judgment, 103, as in-
ducing the necessity of entasis, 107.

Churches, preservation of the Athenian temples by
their conversion into, 74.

Cicero, quotation from, respecting the inclination of
the columns of the Temple of Castor at Syracuse,
3S note 2.

Cimonium, or south wall of Acropolis, built by
Cimon the son of Miltiades, description of, 2 ;
fragments of sculpture built into casing of, 2 ;
architectural fragments in, 2, 6, 102.

Colour : remains of, and moderate use of, on the ar-
chaic statues, 5 ; on the earlier Parthenon, 98 ;
on a fragment of an ancient Doric cornice, 7.

Columns : discarded drums of, belonging to Par-
thenon, 3 ; drums of, belonging to earlier Par-
thenon, 6, 99 ; unfinished marble drums inserted
in Acropolis wall, see also Pelasgicum, 99 ;
difference of diameter of, in the Pronaos and
Posticum of the Parthenon, 12 ; plan of, traced
on the pavement, 9, 25 ; on the theory of
the diminution and entasis of, when single, 107
note 3 ; different heights of, in the same front, Par.
thenon, 1 5 ; Propykea, 61 ; variety in height of,
in east and west fronts of Propyla^a, 62 ;
number of in the Olympieum, 77 ; in the
earlier Parthenon, 101 ; capitals of, see capitals ;
entasis of, see entasis ; flutes of, see flutes; in-
clination of, see inclination.

Conchoid of Nicomedes described, App. IN. Art. 3 ;
proposed by Vignola for forming the entasis of
2 K

Concussion by earthquakes or explosions, effect of,
on the Parthenon, 22 note 1, 28 note 6.

Conic Sections (also called curves of the second
order) described, App. in. Art. 4-8 ; the names
of the three varieties, Art. 4-8 ; the properties
common to all the varieties, Art 5 ; their
differences, Art. 7 ; their etymology. Art 7 ; the
invention of these curves incorrectly ascribed to
Menechmes a friend of Plato, see Menechmes ;
known to the builders of the Parthenon and prob-
ably earlier, 40 note 1 ; the probable manner of
the invention and practical application of, App.
HI. Art 11; complete investigation of, by Apollo-
nius Perga^us, App. in. Art. 8; the probable
methods of constructing and using, by the Greeks,
48 note 3 ; determination by the Greeks of the
centre of a given conic section, 49 ; see Ellipse,
Parabola, Hyperbola, and Curvature, circle of.

Curvature, horizontal, discovery of, in Parthenon
by Mr. Pennethorne, 22 note I, 23; mention
of, by Vitruvius, 22 ; not perceptible from
ordinary points of view and accidental instance
of, in the west front of St. Paul's Cathedral,
London, 24 note 1 ; another accidental instance
in the north wing of the Propykea, 28 note 6 ;
table of examples of, 27 ; not found in very small
structures, 27 ; always greater in the front than
on the flank of a temple, 27, 105; found
only in the entablature of the Propykea, 27, 104 ;
found on the fronts only at the Temple of
Neptune at Pactum, and at Corinth, 28, 104 ;
at Sunium, 28 ; not found at ./Egina, Bassa?, or
Rhamnus, 28 ; has not arisen from settlement, in
the majority of Greek temples, 28 ; of the
Parthenon, east front, 29 ; regularity of that of
east front and of north side, 31; methods
proposed for setting out the curve, 31 ; of the
west front of the Parthenon, 31 ; its irregulari-
ties accounted for, 31 ; greater amount of, in
the new than in the earlier Parthenon, the way
in which this result was produced, 31 ; of the
south side, 32 ; of the interior and its object
considered, 33, 34.

the echinus ; of the entasis ; and of the soffits
of the pediment; see Echinus, Entasis, Soffit.

defined, App. in. Art 8; radius of, a rule
for determining in the case of the Conic Sections
seems to have been known in the time of
Pericles, certainly known to Apollonius Per-
gaeus, App. in. Art, 8 ; radius of, in the entasis of