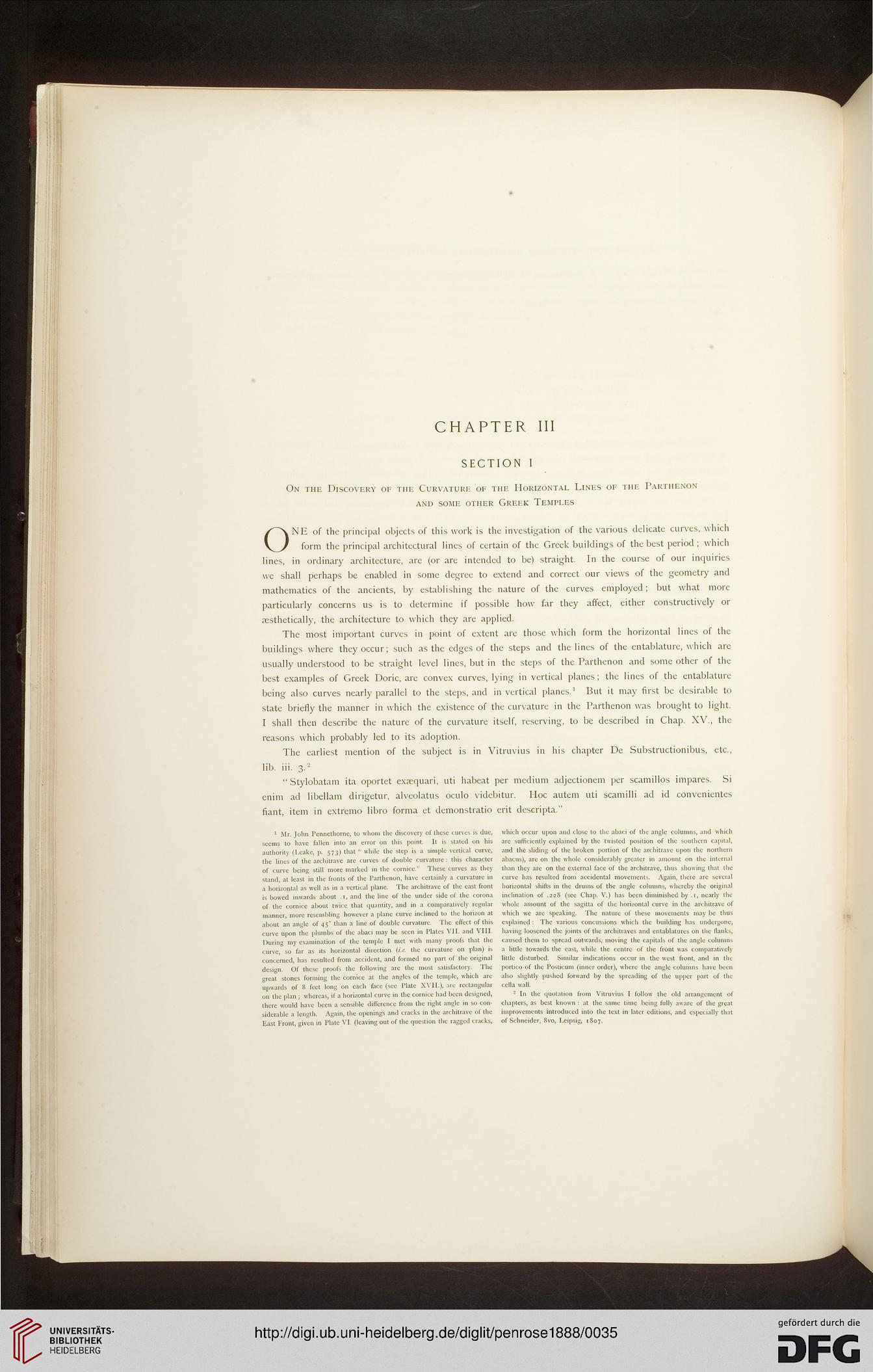 ONE of the principal objects of this work is the investigation of the various delicate curves, which
form the principal architectural lines of certain of the Greek buildings of the best period ; which
lines, in ordinary architecture, are (or are intended to be) straight. In the course of our inquiries
we shall perhaps be enabled in some degree to extend and correct our views of the geometry and
mathematics of the ancients, by establishing the nature of the curves employed; but what more
particularly concerns us is to determine if possible how far they affect, either constructively or
aesthetically, the architecture to which they are applied.

The most important curves in point of extent are those which form the horizontal lines of the
buildings where they occur; such as the edges of the steps and the lines of the entablature, which are
usually understood to be straight level lines, but in the steps of the Parthenon and some other of the
best examples of Greek Doric, are convex curves, lying in vertical planes; the lines of the entablature
being also curves nearly parallel to the steps, and in vertical planes.1 But it may first be desirable to
state briefly the manner in which the existence of the curvature in the Parthenon was brought to light.
I shall then describe the nature of the curvature itself, reserving, to be described in Chap. XV., the
reasons which probably led to its adoption.

The earliest mention of the subject is in Vitruvius in his chapter De Substructionibus, etc.,
lib. iii. 3.2

1 Mr. John Pennethorne, to whom the discovery of these curves is due,
seems to have fallen into an error on this point. It is stated on his
authority (Leake, p. 573) that " while the step is a simple vertical curve,
the lines of the architrave are curves of double curvature: this character
of curve being still more marked in the cornice," These curves as they
stand, at least in the fronts of the Parthenon, have certainly a curvature in
a horizontal as well as in a vertical plane. The architrave of the east front
is bowed inwards about .1, and the line of the under side of the corona
of the cornice about twice that quantity, and in a comparatively regular
manner, more resembling however a plane curve inclined to the horizon at
about an angle of 45° than a line of double curvature. The effect of this
curve upon the plumbs of the abaci may be seen in Plates VII. and VIII.
During my examination of the temple I met with many proofs that the
curve, so far as its horizontal direction (i.e. the curvature on plan) is
concerned, has resulted from accident, and formed no pari of the original
design. Of these proofs the following are the most satisfactory. The
great stones forming the cornice at the angles of the temple, which are
upwards of 8 feet long on each face (sec Plate XVII.), are rectangular
on the plan ; whereas, if a horizontal curve in the cornice had been designed,
there would have been a sensible difference from the right angle in so con-
siderable a length. Again, the openings and cracks in the architrave of the
East Front, given in Plate VI. (leaving out of the question the ragged cracks,

which occur upon and close to the abaci of the angle columns, and which
are sufficiently explained by the twisted position of the southern capital,
and the sliding of the broken portion of the architrave upon the northern
abacus), are on the whole considerably greater in amount on the internal
than they are on the external face of the architrave, thus showing that the
curve has resulted from accidental movements. Again, there are several
horizontal shifts in the drums of the angle columns, whereby the original
inclination of .228 (see Chap. V.) has been diminished by .1, nearly the
whole amount of the sagitta of the horizontal curve in the architrave of
which we are speaking. The nature of these movements may be thus
explained: The various concussions which the building has undergone,
having loosened the joints of the architraves and entablatures on the flanks,
caused them to spread outwards, moving the capitals of the angle columns
a little towards the east, while the centre of the front was comparatively
little disturbed. Similar indications occur in the west front, and in the
portico of the Posticum (inner order), where the angle columns have been
also slightly pushed forward by the spreading of the upper part of the
cella wall.

2 In the quotation from Vitruvius I follow the old arrangement of
chapters, as best known : at the same time being fully aware of the great
improvements introduced into the text in later editions, and especially that
of Schneider, 8vo, Leipsig, 1807.