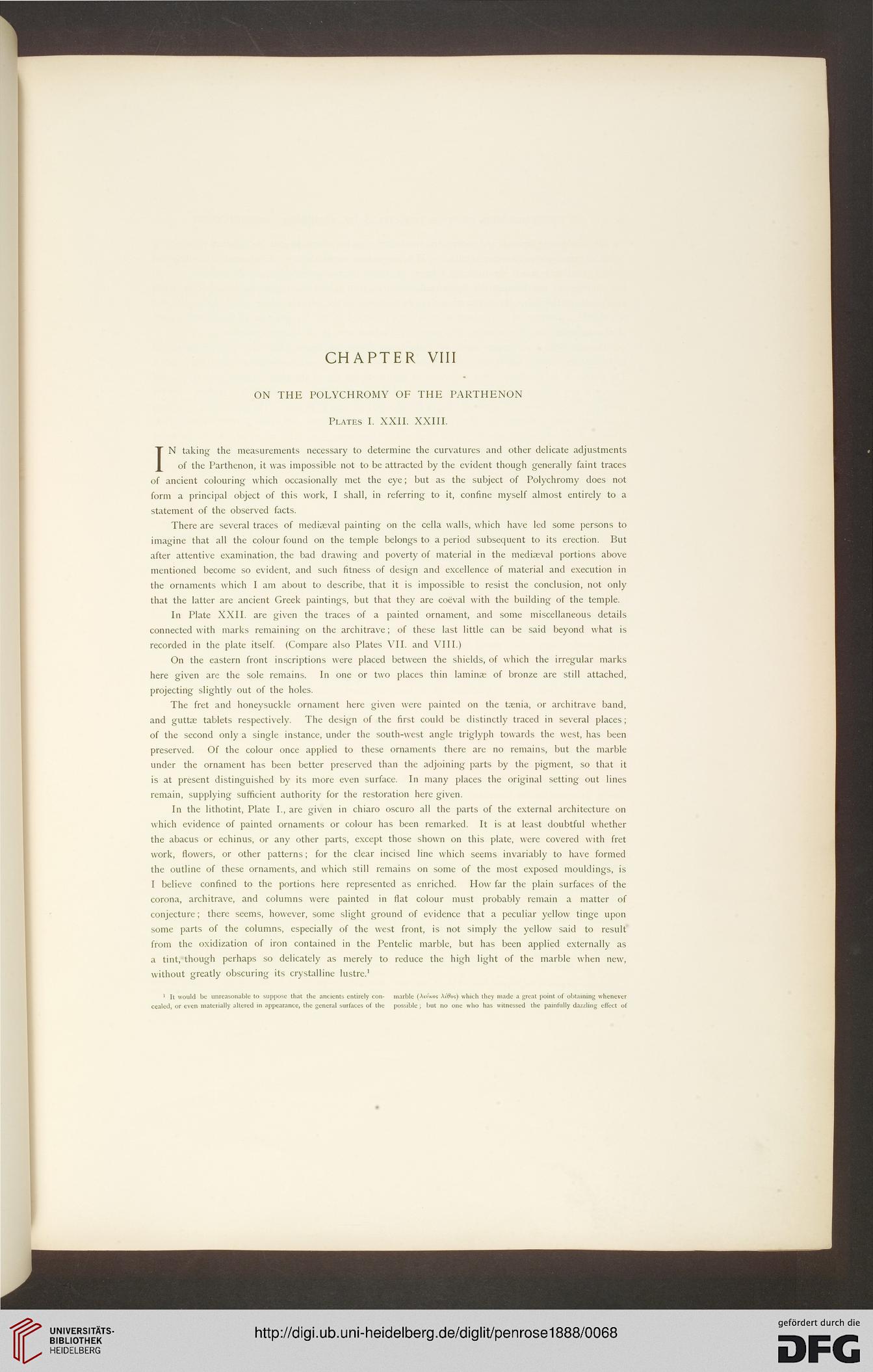 ON THE POLYCHROMY OF THE PARTHENON
Plates I. XXII. XXIII.

IN taking the measurements necessary to determine the curvatures and other delicate adjustments
of the Parthenon, it was impossible not to be attracted by the evident though generally faint traces
of ancient colouring which occasionally met the eye; but as the subject of Polychromy does not
form a principal object of this work, I shall, in referring to it, confine myself almost entirely to a
statement of the observed facts.

There are several traces of mediaeval painting on the cella walls, which have led some persons to
imagine that all the colour found on the temple belongs to a period subsequent to its erection. But
after attentive examination, the bad drawing and poverty of material in the mediaeval portions above
mentioned become so evident, and such fitness of design and excellence of material and execution in
the ornaments which I am about to describe, that it is impossible to resist the conclusion, not only
that the latter are ancient Greek paintings, but that they are coeval with the building of the temple.

In Plate XXII. are given the traces of a painted ornament, and some miscellaneous details
connected with marks remaining on the architrave; of these last little can be said beyond what is
recorded in the plate itself. (Compare also Plates VII. and VIII.)

On the eastern front inscriptions were placed between the shields, of which the irregular marks
here given are the sole remains. In one or two places thin laminse of bronze are still attached,
projecting slightly out of the holes.

The fret and honeysuckle ornament here given were painted on the taenia, or architrave band,
and guttae tablets respectively. The design of the first could be distinctly traced in several places ;
of the second only a single instance, under the south-west angle triglyph towards the west, has been
preserved. Of the colour once applied to these ornaments there are no remains, but the marble
under the ornament has been better preserved than the adjoining parts by the pigment, so that it
is at present distinguished by its more even surface. In many places the original setting out lines
remain, supplying sufficient authority for the restoration here given.

In the lithotint, Plate I., are given in chiaro oscuro all the parts of the external architecture on
which evidence of painted ornaments or colour has been remarked. It is at least doubtful whether
the abacus or echinus, or any other parts, except those shown on this plate, were covered with fret
work, flowers, or other patterns; for the clear incised line which seems invariably to have formed
the outline of these ornaments, and which still remains on some of the most exposed mouldings, is
I believe confined to the portions here represented as enriched. How far the plain surfaces of the
corona, architrave, and columns were painted in flat colour must probably remain a matter of
conjecture; there seems, however, some slight ground of evidence that a peculiar yellow tinge upon
some parts of the columns, especially of the west front, is not simply the yellow said to result
from the oxidization of iron contained in the Pentelic marble, but has been applied externally as
a tint, though perhaps so delicately as merely to reduce the high light of the marble when new,
without greatly obscuring its crystalline lustre.1

1 It would be unreasonable to suppose that the ancients entirely con- marble (Aei'wos At'#os) which they made a great point of obtaining whenever
cealed, or even materially altered in appearance, the general surfaces of the possible; but no one who has witnessed the painfully dazzling effect of