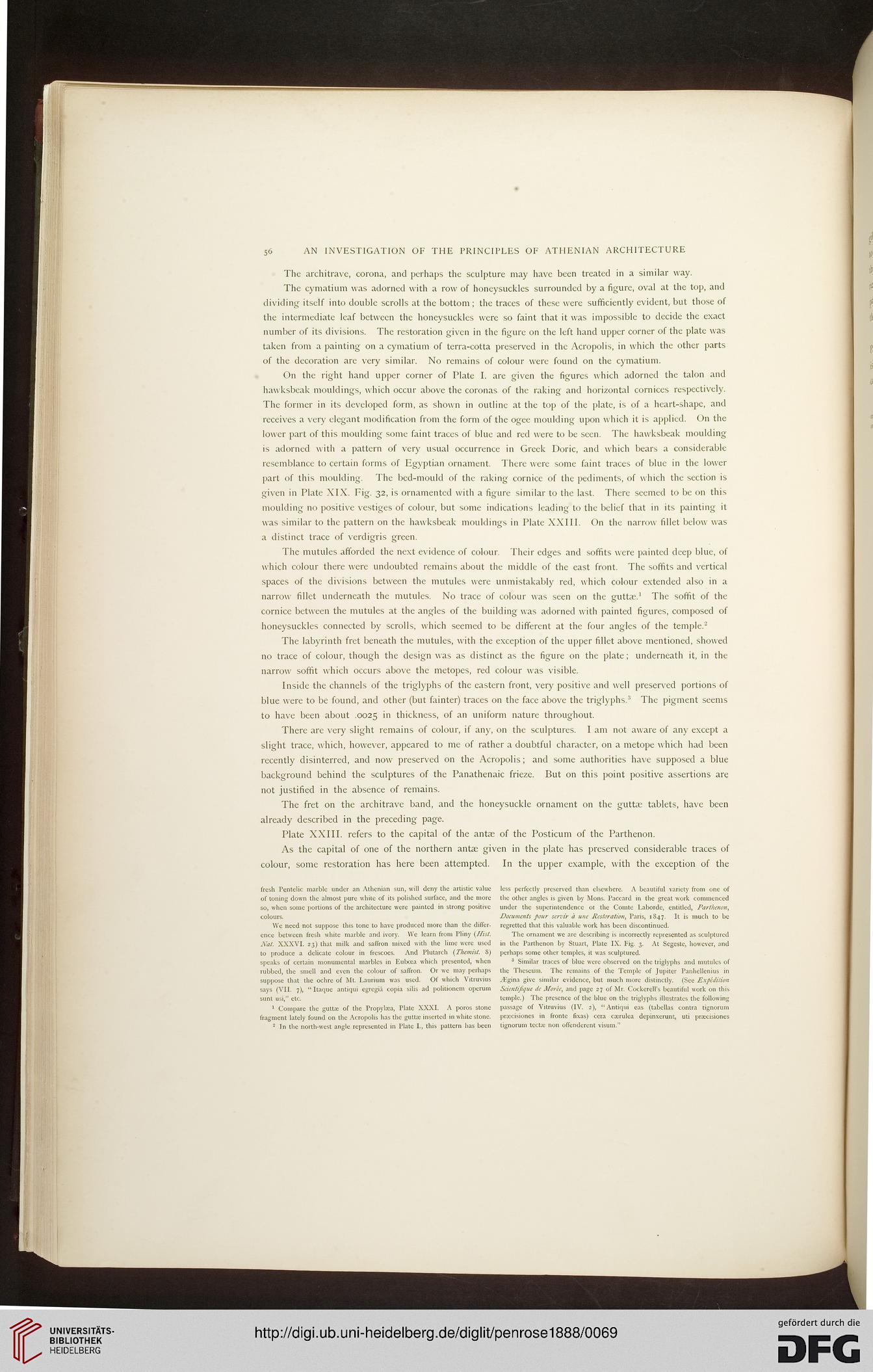 AN INVESTIGATION OF THE PRINCIPLES OF ATHENIAN ARCHITECTURE

The architrave, corona, and perhaps the sculpture may have been treated in a similar way.

The cymatium was adorned with a row of honeysuckles surrounded by a figure, oval at the top, and
dividing itself into double scrolls at the bottom; the traces of these were sufficiently evident, but those of
the intermediate leaf between the honeysuckles were so faint that it was impossible to decide the exact
number of its divisions. The restoration given in the figure on the left hand upper corner of the plate was
taken from a painting on a cymatium of terra-cotta preserved in the Acropolis, in which the other parts
of the decoration are very similar. No remains of colour were found on the cymatium.

On the right hand upper corner of Plate I. are given the figures which adorned the talon and
hawksbeak mouldings, which occur above the coronas of the raking and horizontal cornices respectively.
The former in its developed form, as shown in outline at the top of the plate, is of a heart-shape, and
receives a very elegant modification from the form of the ogee moulding upon which it is applied. On the
lower part of this moulding some faint traces of blue and red were to be seen. The hawksbeak moulding
is adorned with a pattern of very usual occurrence in Greek Doric, and which bears a considerable
resemblance to certain forms of Egyptian ornament. There were some faint traces of blue in the lower
part of this moulding. The bed-mould of the raking cornice of the pediments, of which the section is
given in Plate XIX. Fig. 32, is ornamented with a figure similar to the last. There seemed to be on this
moulding no positive vestiges of colour, but some indications leading to the belief that in its painting it
was similar to the pattern on the hawksbeak mouldings in Plate XXIII. On the narrow fillet below was
a distinct trace of verdigris green.

The mutules afforded the next evidence of colour. Their edges and soffits were painted deep blue, of
which colour there were undoubted remains about the middle of the east front. The soffits and vertical
spaces of the divisions between the mutules were unmistakably red, which colour extended also in a
narrow fillet underneath the mutules. No trace of colour was seen on the gutta?.1 The soffit of the
cornice between the mutules at the angles of the building was adorned with painted figures, composed of
honeysuckles connected by scrolls, which seemed to be different at the four angles of the temple.2

The labyrinth fret beneath the mutules, with the exception of the upper fillet above mentioned, showed
no trace of colour, though the design was as distinct as the figure on the plate; underneath it, in the
narrow soffit which occurs above the metopes, red colour was visible.

Inside the channels of the triglyphs of the eastern front, very positive and well preserved portions of
blue were to be found, and other (but fainter) traces on the face above the triglyphs.3 The pigment seems
to have been about .0025 in thickness, of an uniform nature throughout.

There are very slight remains of colour, if any, on the sculptures. I am not aware of any except a
slight trace, which, however, appeared to me of rather a doubtful character, on a metope which had been
recently disinterred, and now preserved on the Acropolis; and some authorities have supposed a blue
background behind the sculptures of the Panathenaic frieze. But on this point positive assertions are
not justified in the absence of remains.

The fret on the architrave band, and the honeysuckle ornament on the gutta; tablets, have been
already described in the preceding page.

Plate XXIII. refers to the capital of the anta?. of the Posticum of the Parthenon.

As the capital of one of the northern anta; given in the plate has preserved considerable traces of
colour, some restoration has here been attempted. In the upper example, with the exception of the

fresh Pentelic marble under an Athenian sun, will deny the artistic value
of toning down the almost pure white of its polished surface, and the more
so, when some portions of the architecture were painted in strong positive
colours,

We need not suppose this tone to have produced more than the differ-
ence between fresh white marble and ivory. We learn from Pliny {Hist.
Nat. XXXVI. 23) that milk and saffron mixed with the lime were used
to produce a delicate colour in frescoes. And Plutarch {Themist. 8)
speaks of certain monumental marbles in Eubcea which presented, when
rubbed, the smell and even the colour of saffron. Or wc may perhaps
suppose that the ochre of Ml. Launum was used. Of which Vitruvius
says (VII. 7), "Itaque antiqui egregia copia silis ad politionem operum
sunt usi," etc.

1 Compare the gutta? of the Propykea, Plate XXXI. A poros stone
fragment lately found on the Acropolis has the guttte inserted in white stone.

2 In the north-west angle represented in Plate I., this pattern has been

less perfectly preserved than elsewhere. A beautiful variety from one of
the other angles is given by Mons. Paccard in the great work commenced
under the superintendence ot the Cointe Laborde, entitled, Parthenon,
Documents pour seri'ir a Kile Restoration, Paris, 1847. It is much to be
regretted that this valuable work has been discontinued.

The ornament we are describing is incorrectly represented as sculptured
in the Parthenon by Stuart, Plate IX. Fig. 3. At Segeste, however, and
perhaps some other temples, it was sculptured.

3 Similar traces of blue were observed on the triglyphs and mutules of
the Theseum. The remains of the Temple of Jupiter Panhellenius in
,,-Egina give similar evidence, but much more distinctly. (See Expedition
Scientifique de Mor'ee, and page 27 of Mr, Cockerell's beautiful work on this
temple.) The presence of the blue on the triglyphs illustrates the following
passage of Vitruvius (IV. 2), "Antiqui eas (tabellas contra tignorum
prtecisiones in fronte fixas) cera cairulea depinxerunt, uti prtecisioncs
tignorum tecta; non offenderent visum."