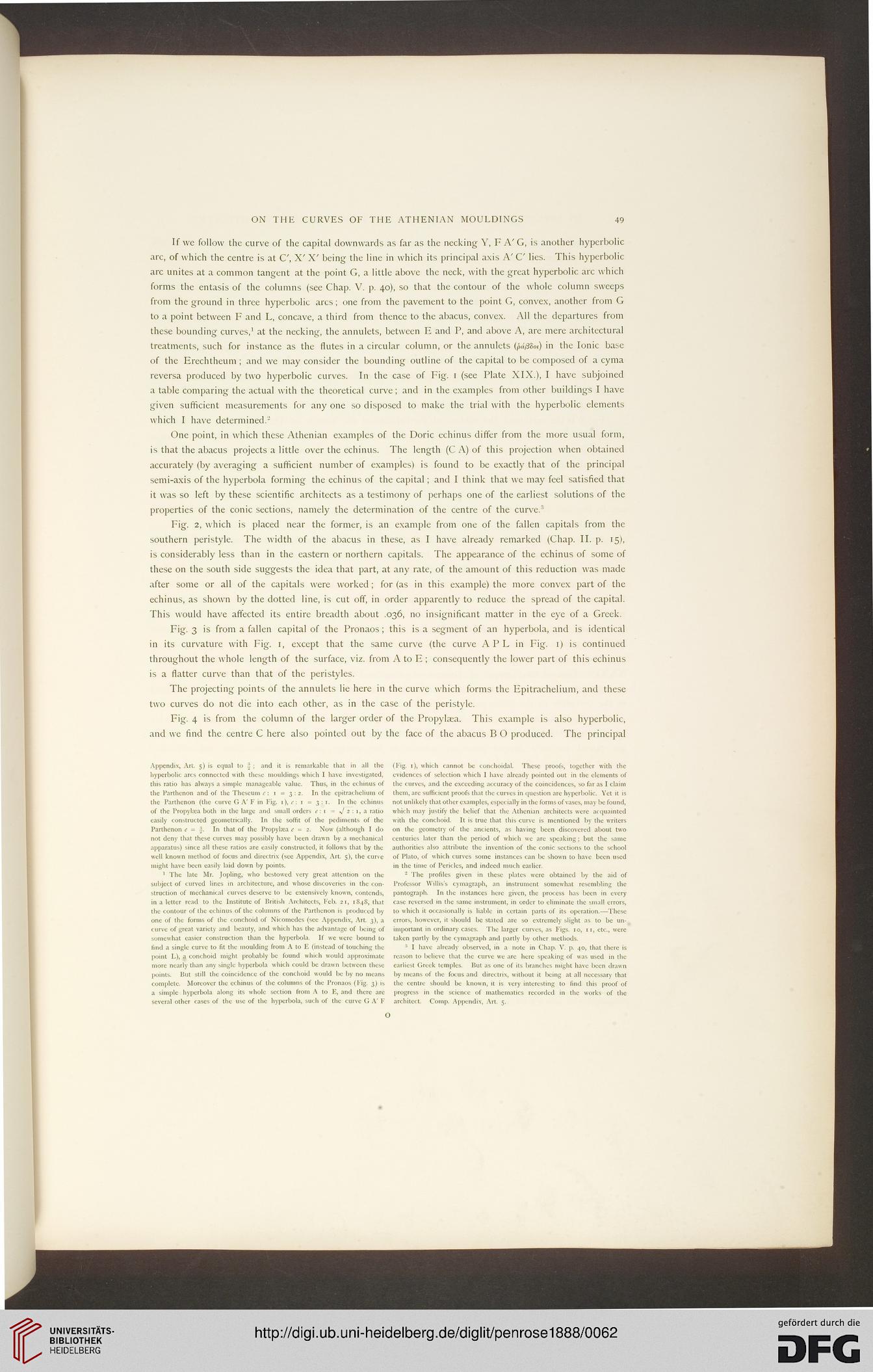 Information about OCR text
ON THE CURVES OF THE ATHENIAN MOULDINGS

If we follow the curve of the capital downwards as far as the necking Y, F A' G, is another hyperbolic
arc, of which the centre is at C, X' X' being the line in which its principal axis A' C lies. This hyperbolic
arc unites at a common tangent at the point G, a little above the neck, with the great hyperbolic arc which
forms the entasis of the columns (see Chap. V. p. 40), so that the contour of the whole column sweeps
from the ground in three hyperbolic arcs; one from the pavement to the point G, convex, another from G
to a point between F and L, concave, a third from thence to the abacus, convex. All the departures from
these bounding curves,1 at the necking, the annulets, between E and P, and above A, are mere architectural
treatments, such for instance as the flutes in a circular column, or the annulets (pd/3Soi) in the Ionic base
of the Erechtheum; and we may consider the bounding outline of the capital to be composed of a cyma
reversa produced by two hyperbolic curves. In the case of Fig. 1 (see Plate XIX.), I have subjoined
a table comparing the actual with the theoretical curve; and in the examples from other buildings I have
given sufficient measurements for any one so disposed to make the trial with the hyperbolic elements
which I have determined.'2

One point, in which these Athenian examples of the Doric echinus differ from the more usual form,
is that the abacus projects a little over the echinus. The length (C A) of this projection when obtained
accurately (by averaging a sufficient number of examples) is found to be exactly that of the principal
semi-axis of the hyperbola forming the echinus of the capital; and I think that we may feel satisfied that
it was so left by these scientific architects as a testimony of perhaps one of the earliest solutions of the
properties of the conic sections, namely the determination of the centre of the curve.'1

Fig. 2, which is placed near the former, is an example from one of the fallen capitals from the
southern peristyle. The width of the abacus in these, as I have already remarked (Chap. II. p. 15),
is considerably less than in the eastern or northern capitals. The appearance of the echinus of some of
these on the south side suggests the idea that part, at any rate, of the amount of this reduction was made
after some or all of the capitals were worked ; for (as in this example) the more convex part of the
echinus, as shown by the dotted line, is cut off, in order apparently to reduce the spread of the capital.
This would have affected its entire breadth about .036, no insignificant matter in the eye of a Greek.

Fig. 3 is from a fallen capital of the Pronaos ; this is a segment of an hyperbola, and is identical
in its curvature with Fig. 1, except that the same curve (the curve APL in Fig. 1) is continued
throughout the whole length of the surface, viz. from A to E ; consequently the lower part of this echinus
is a flatter curve than that of the peristyles.

The projecting points of the annulets lie here in the curve which forms the Epitrachelium, and these
two curves do not die into each other, as in the case of the peristyle.

Fig. 4 is from the column of the larger order of the Propylaea. This example is also hyperbolic,
and we find the centre C here also pointed out by the face of the abacus B O produced. The principal

Appendix, Art. 5) is equal to | ; and it is remarkable that in all the
hyperbolic arcs connected with these mouldings which I have investigated,
this ratio has always a simple manageable value. Thus, in the echinus of
the Parthenon and of the Theseum 5:1 = 3:2. In the epitrachelium of
the Parthenon (the curve G A' F in Fig. 1), e: 1 = 3 :1. In the echinus
of the Propylsea both in the large and smalt orders e: 1 - */ 2 : 1, a ratio
easily constructed geometrically. In the soffit of the pediments of the
Parthenon e - '\. In that of the Propyls e = 2. Now (although I do
not deny that these curves may possibly have been drawn by a mechanical
apparatus) since all these ratios are easily constructed, it follows that by the
well known method of focus and directrix (see Appendix, Art. 5), the curve
might have been easily laid down by points.

1 The late Mr. Jopling, who bestowed very great attention on the
subject of curved lines in architecture, and whose discoveries in the con-
struction of mechanical curves deserve to be extensively known, contends,
in a letter read to the Institute of British Architects, Feb. 21, 1848, that
the contour of the echinus of the columns of the Parthenon is produced by
one of the forms of the conchoid of Nicomedes (see Appendix, Art 3), a
curve of great variety and beauty, and which has the advantage of being of
somewhat easier construction than the hyperbola. If we were bound to
find a single curve to fit the moulding from A to E (instead of touching the
point L), a conchoid might probably be found which would approximate
more nearly than any single hyperbola which could be drawn between these
points. But still the coincidence of the conchoid would be by no means
complete. Moreover the echinus of the columns of the Pronaos (Fig. 3) is
a simple hyperbola along its whole section from A to E, and there are
several other cases of the use of the hyperbola, such of the curve G A' F

(Fig. 1), which cannot be conchoidal. These proofs, together with the
evidences of selection which I have already pointed out in the elements of
the curves, and the exceeding accuracy of the coincidences, so far as I claim
them, are sufficient proofs that the curves in question are hyperbolic. Yet it is
not unlikely that other examples, especially in the forms of vases, may be found,
which may justify the belief that the Athenian architects were acquainted
with the conchoid. It is true that this curve is mentioned by the writers
on the geometry of the ancients, as having been discovered about two
centuries later than the period of which we are speaking; but the same
authorities also attribute the invention of the conic sections to the school
of Plato, of which curves some instances can be shown to have been used
in the time of Pericles, and indeed much earlier.

- The profiles given in these plates were obtained by the aid of
Professor Willis's cymagraph, an instrument somewhat resembling the
pantograph. In the instances here given, the process has been in every
case reversed in the same instrument, in order to eliminate the small errors,
to which it occasionally is liable in certain parts of its operation.—These
errors, however it should be stated are so extremely slight as to be un-
important in ordinary cases. The larger curves, as Pigs. 10, n, etc., were
taken partly by the cymagraph and partly by other methods.

3 I have already observed, in a note in Chap. V. p. 40, that there is
reason to believe that the curve we are here speaking of was used in the
earliest Greek temples. But as one of its branches might have been drawn
by means of the focus and directrix, without it being at all necessary that
the centre should be known, it is very interesting to find this proof of
progress in the science of mathematics recorded in the works of the
architect. Comp. Appendix, Art, 5.