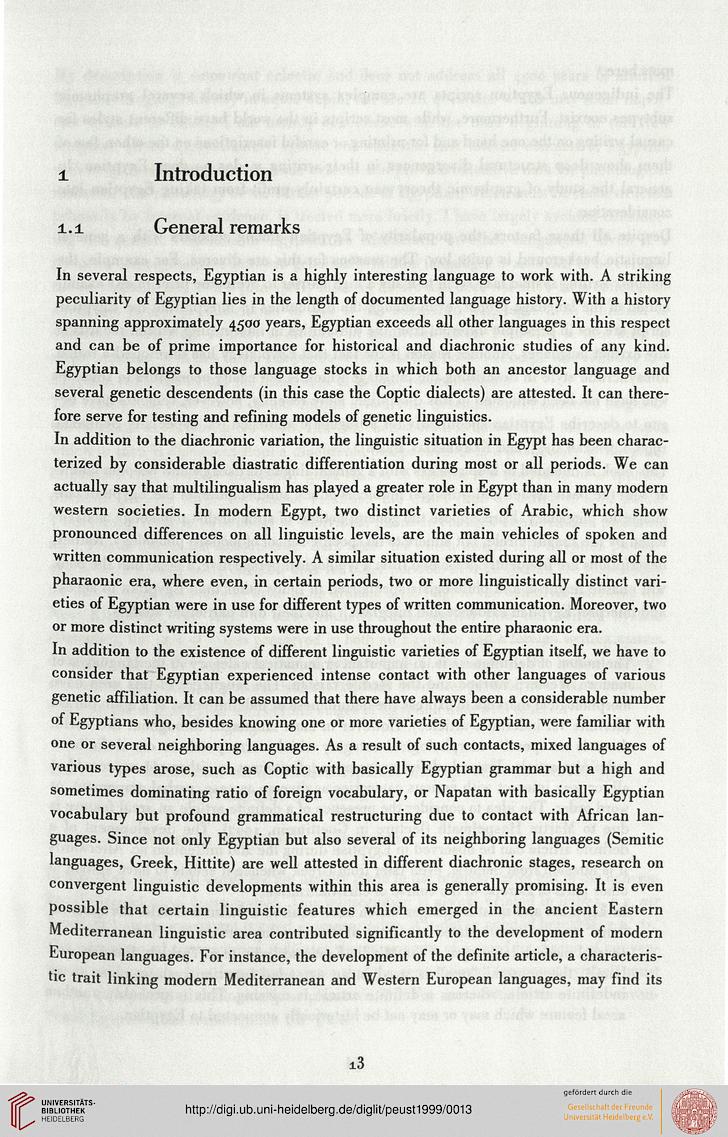 In several respects, Egyptian is a highly interesting language to work with. A striking
peculiarity of Egyptian lies in the length of documented language history. With a history
spanning approximately 4500 years, Egyptian exceeds all other languages in this respect
and can be of prime importance for historical and diachronic studies of any kind.
Egyptian belongs to those language stocks in which both an ancestor language and
several genetic descendents (in this case the Coptic dialects) are attested. It can there-
fore serve for testing and refining models of genetic linguistics.

In addition to the diachronic variation, the linguistic situation in Egypt has been charac-
terized by considerable diastratic differentiation during most or all periods. We can
actually say that multilingualism has played a greater role in Egypt than in many modern
western societies. In modern Egypt, two distinct varieties of Arabic, which show
pronounced differences on all linguistic levels, are the main vehicles of spoken and
written communication respectively. A similar situation existed during all or most of the
pharaonic era, where even, in certain periods, two or more linguistically distinct vari-
eties of Egyptian were in use for different types of written communication. Moreover, two
or more distinct writing systems were in use throughout the entire pharaonic era.
In addition to the existence of different linguistic varieties of Egyptian itself, we have to
consider that Egyptian experienced intense contact with other languages of various
genetic affiliation. It can be assumed that there have always been a considerable number
°f Egyptians who, besides knowing one or more varieties of Egyptian, were familiar with
one or several neighboring languages. As a result of such contacts, mixed languages of
various types arose, such as Coptic with basically Egyptian grammar but a high and
sometimes dominating ratio of foreign vocabulary, or Napatan with basically Egyptian
vocabulary but profound grammatical restructuring due to contact with African lan-
guages. Since not only Egyptian but also several of its neighboring languages (Semitic
languages, Greek, Hittite) are well attested in different diachronic stages, research on
convergent linguistic developments within this area is generally promising. It is even
possible that certain linguistic features which emerged in the ancient Eastern
Mediterranean linguistic area contributed significantly to the development of modern
European languages. For instance, the development of the definite article, a characteris-
tic trait linking modern Mediterranean and Western European languages, may find its