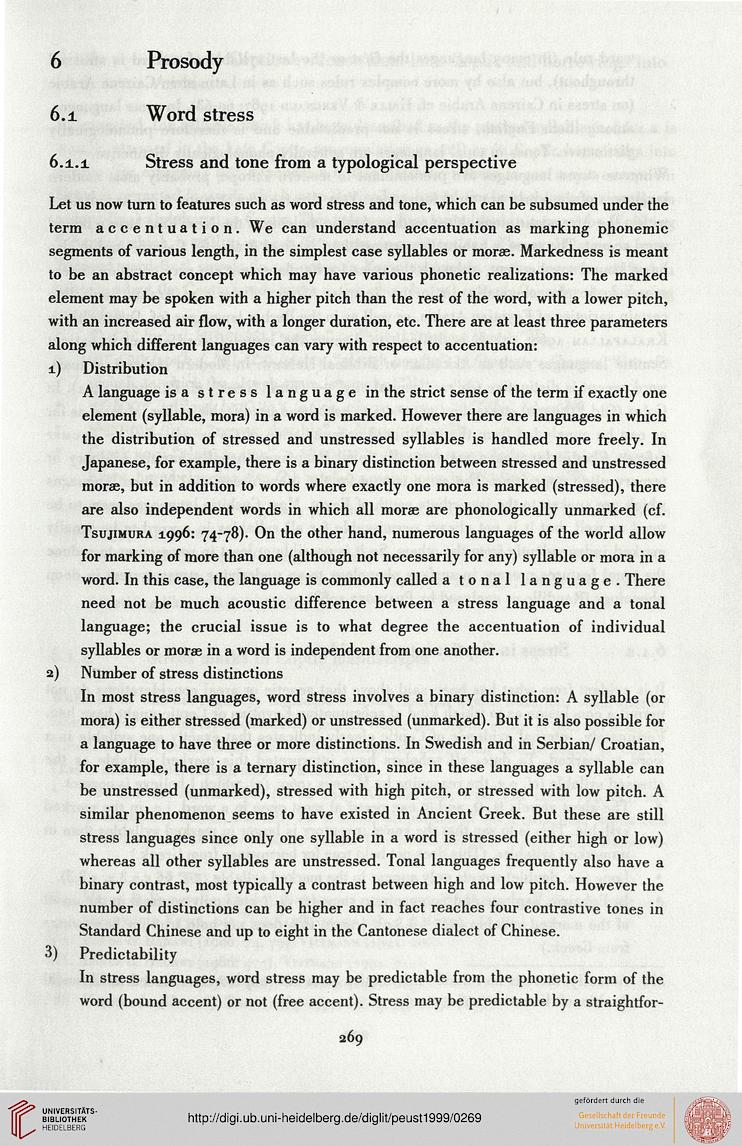 6.±.± Stress and tone from a typological perspective

Let us now turn to features such as word stress and tone, which can be subsumed under the
term accentuation. We can understand accentuation as marking phonemic
segments of various length, in the simplest case syllables or morse. Markedness is meant
to be an abstract concept which may have various phonetic realizations: The marked
element may be spoken with a higher pitch than the rest of the word, with a lower pitch,
with an increased air flow, with a longer duration, etc. There are at least three parameters
along which different languages can vary with respect to accentuation:

A language is a stress language in the strict sense of the term if exactly one
element (syllable, mora) in a word is marked. However there are languages in which
the distribution of stressed and unstressed syllables is handled more freely. In
Japanese, for example, there is a binary distinction between stressed and unstressed
mora;, but in addition to words where exactly one mora is marked (stressed), there
are also independent words in which all mora; are phonologically unmarked (cf.
Tsujimura 1996: 74-78). On the other hand, numerous languages of the world allow
for marking of more than one (although not necessarily for any) syllable or mora in a
word. In this case, the language is commonly called a tonal language. There
need not be much acoustic difference between a stress language and a tonal
language; the crucial issue is to what degree the accentuation of individual
syllables or moras in a word is independent from one another.

In most stress languages, word stress involves a binary distinction: A syllable (or
mora) is either stressed (marked) or unstressed (unmarked). But it is also possible for
a language to have three or more distinctions. In Swedish and in Serbian/ Croatian,
for example, there is a ternary distinction, since in these languages a syllable can
be unstressed (unmarked), stressed with high pitch, or stressed with low pitch. A
similar phenomenon seems to have existed in Ancient Greek. But these are still
stress languages since only one syllable in a word is stressed (either high or low)
whereas all other syllables are unstressed. Tonal languages frequently also have a
binary contrast, most typically a contrast between high and low pitch. However the
number of distinctions can be higher and in fact reaches four contrastive tones in
Standard Chinese and up to eight in the Cantonese dialect of Chinese.