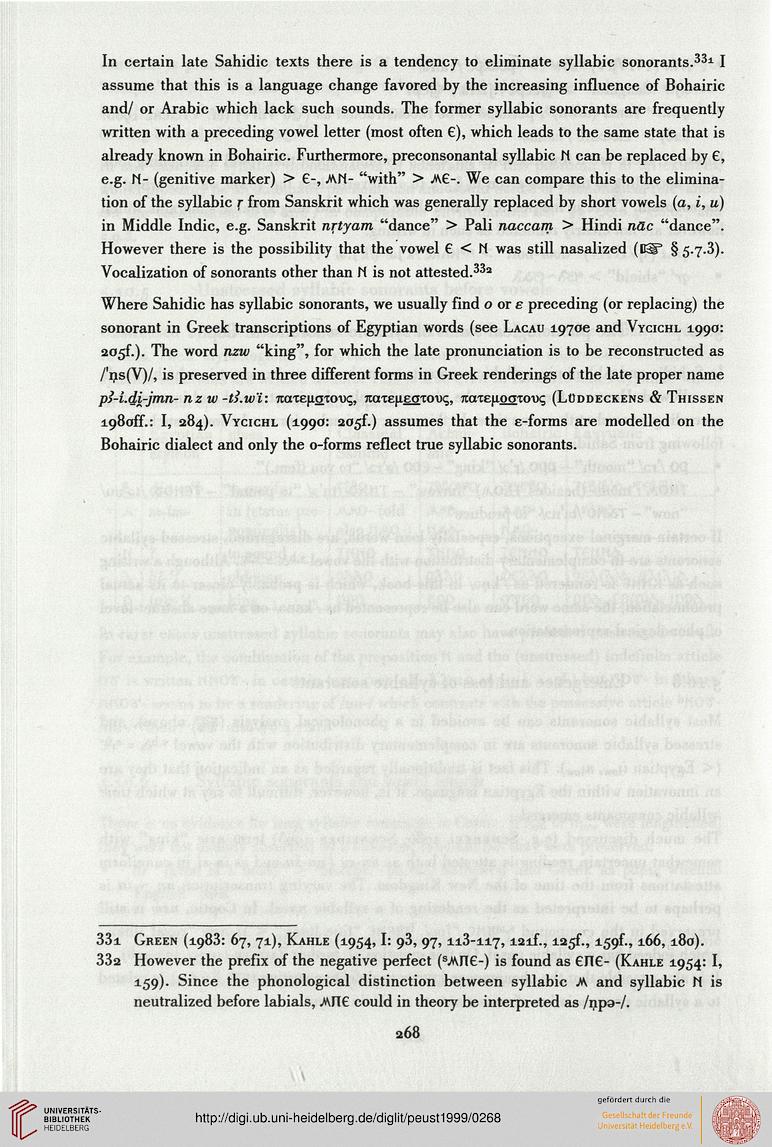 Scroll
OCR fulltext
Information about OCR text
In certain late Sahidic texts there is a tendency to eliminate syllabic sonorants.331 I
assume that this is a language change favored by the increasing influence of Bohairic
and/ or Arabic which lack such sounds. The former syllabic sonorants are frequently
written with a preceding vowel letter (most often £), which leads to the same state that is
already known in Bohairic. Furthermore, preconsonantal syllabic N can be replaced by £,
e.g. M- (genitive marker) > £-, AH- "with" > A6-. We can compare this to the elimina-
tion of the syllabic r from Sanskrit which was generally replaced by short vowels (a, i, u)
in Middle Indie, e.g. Sanskrit nrtyam "dance" > Pali naccam > Hindi nac "dance".
However there is the possibility that the vowel £ < K was still nasalized (Kg3 § 5-7.3).
Vocalization of sonorants other than N is not attested.33*

Where Sahidic has syllabic sonorants, we usually find o or e preceding (or replacing) the
sonorant in Greek transcriptions of Egyptian words (see Lacau 19706 and Vycichl 1990:
205f.). The word nzw "king", for which the late pronunciation is to be reconstructed as
/'ns(V)/, is preserved in three different forms in Greek renderings of the late proper name
p'-i.di-jmn-nzw-ti.w'i: itatEuotow;, nanEjieaxovc,, jtaTEfioaTOD? (Loddeckens & Thissen
i98off.: I, 284). Vycichl (1990: 205f.) assumes that the e-forms are modelled on the
Bohairic dialect and only the o-forms reflect true syllabic sonorants.

332 However the prefix of the negative perfect (sAFie-) is found as Gfie- (Kahle 1954: I,
159). Since the phonological distinction between syllabic A and syllabic N is
neutralized before labials, Afie could in theory be interpreted as /npg-/.