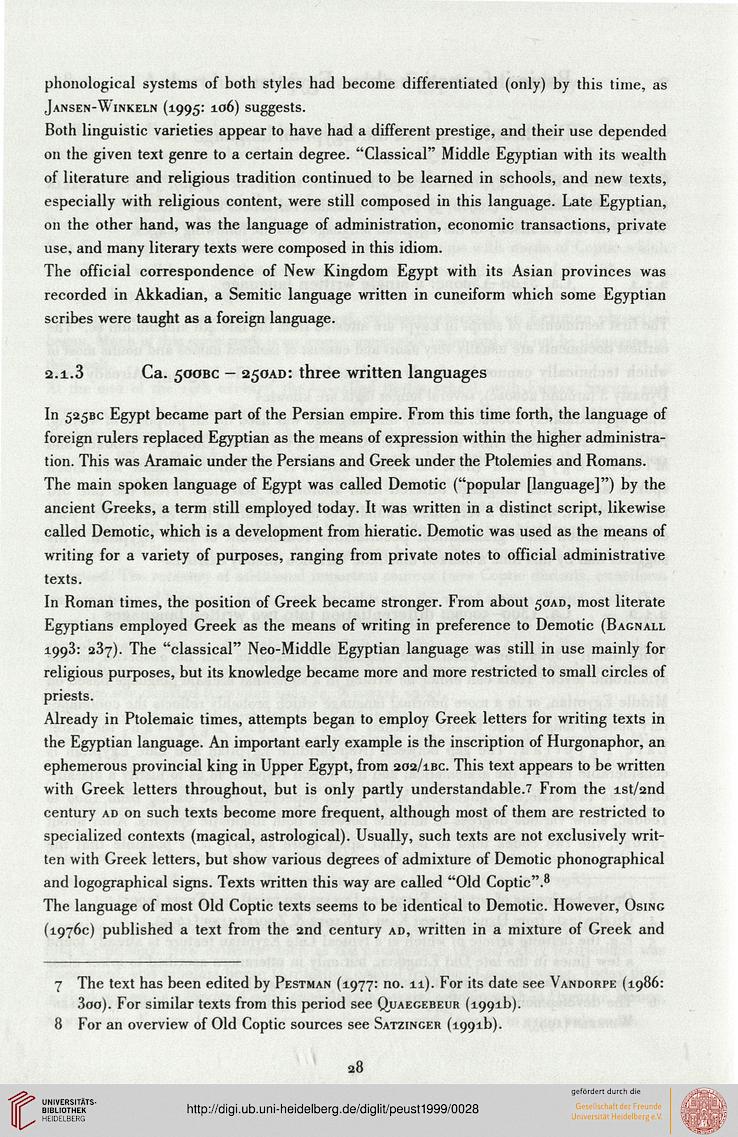 Scroll
OCR fulltext
Information about OCR text
phonological systems of both styles had become differentiated (only) by this time, as

Both linguistic varieties appear to have had a different prestige, and their use depended

on the given text genre to a certain degree. "Classical" Middle Egyptian with its wealth

of literature and religious tradition continued to be learned in schools, and new texts,

especially with religious content, were still composed in this language. Late Egyptian,

on the other hand, was the language of administration, economic transactions, private

use, and many literary texts were composed in this idiom.

recorded in Akkadian, a Semitic language written in cuneiform which some Egyptian

scribes were taught as a foreign language.

In 525BC Egypt became part of the Persian empire. From this time forth, the language of
foreign rulers replaced Egyptian as the means of expression within the higher administra-
tion. This was Aramaic under the Persians and Greek under the Ptolemies and Romans.
The main spoken language of Egypt was called Demotic ("popular [language]") by the
ancient Greeks, a term still employed today. It was written in a distinct script, likewise
called Demotic, which is a development from hieratic. Demotic was used as the means of
writing for a variety of purposes, ranging from private notes to official administrative
texts.

In Roman times, the position of Greek became stronger. From about 50AD, most literate
Egyptians employed Greek as the means of writing in preference to Demotic (Bagnall
1993: 237). The "classical" Neo-Middle Egyptian language was still in use mainly for
religious purposes, but its knowledge became more and more restricted to small circles of
priests.

Already in Ptolemaic times, attempts began to employ Greek letters for writing texts in
the Egyptian language. An important early example is the inscription of Hurgonaphor, an
ephemerous provincial king in Upper Egypt, from 202/iBC. This text appears to be written
with Greek letters throughout, but is only partly understandable.7 From the ist/2nd
century ad on such texts become more frequent, although most of them are restricted to
specialized contexts (magical, astrological). Usually, such texts are not exclusively writ-
ten with Greek letters, but show various degrees of admixture of Demotic phonographical
and logographical signs. Texts written this way are called "Old Coptic".^
The language of most Old Coptic texts seems to be identical to Demotic. However, Osing
(1976c) published a text from the 2nd century ad, written in a mixture of Greek and

8 For an overview of Old Coptic sources see Satzinger (1991b).