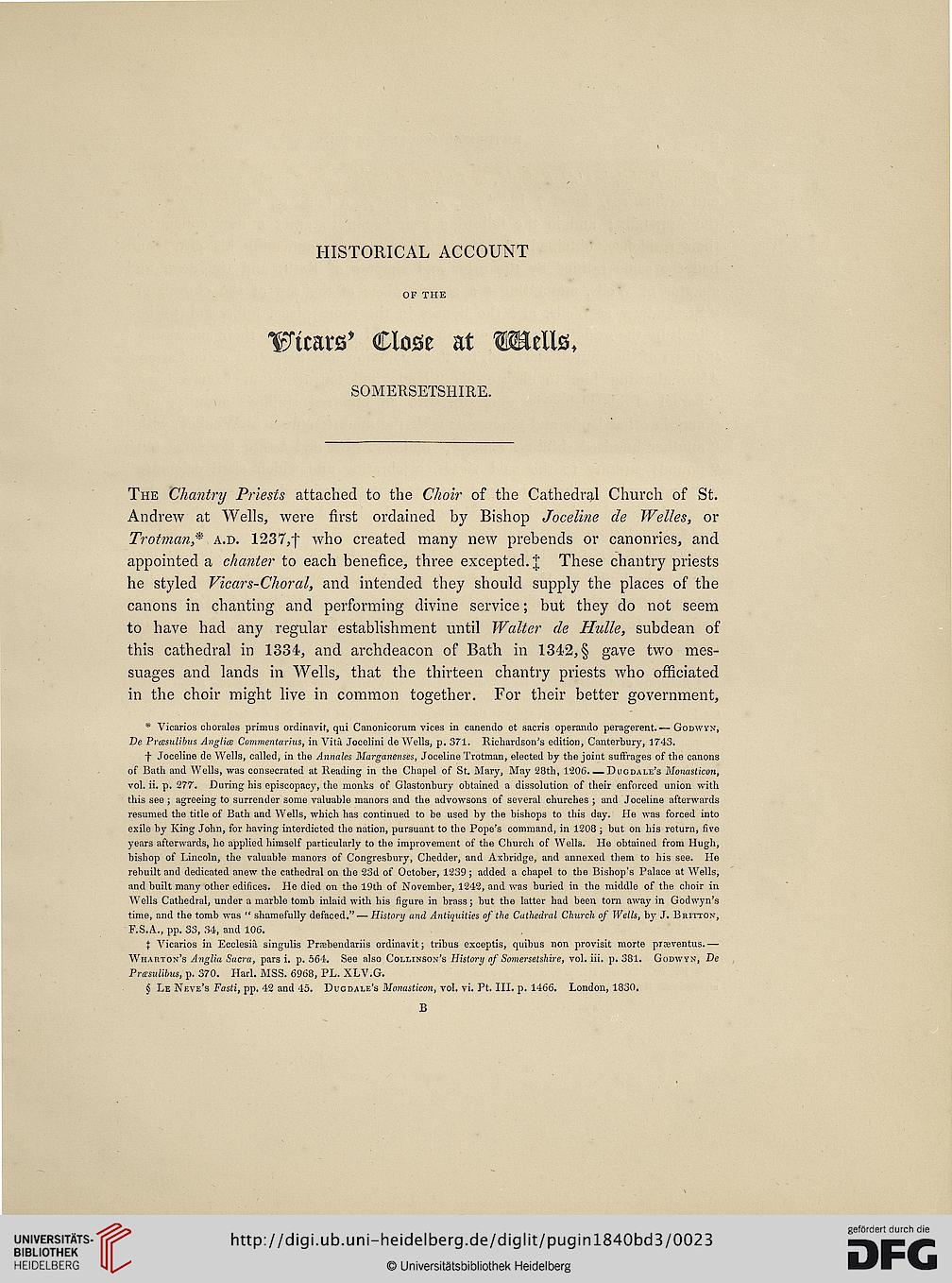 The Chantry Priesis attached to the Choir of the Cathedral Church of St.
Andrew at Wells, were first ordained by Bishop Joceline de Welles, or
Trotman,* a.d. 1237,f who created many new prebends or canonries, and
appointed a chanter to each benefice, three excepted. J These chantry priests
he styled Vicars-Choral, and intended they should supply the places of the
canons in chanting and performing divine service; but they do not seem
to have had any regular establishment until Wcilter de Hidle, subdean of
this cathedral in 1334, and archdeacon of Bath in 1342, § gave two mes-
suages and lands in Wells, that. the thirteen chantry priests who officiated
in the choir might live in common together. For their better government,

f Joceline de Wells, called, in the Annales Marganenses, Joceline Trotman, elected by tbe joint suffrages of the canons
of Batb and Wells, was consecrated at Reading in the Chapel of St. Mary, May 28th, 1206. — Dugdale’s Monasticon,
vol. ii. p. 277. During bis episcopacy, tbe monks of Glastonbury obtained a dissolution of their enforced union with
tbis see ; agreeiug- to surrender some valuable manors and tbe advowsons of several churches ; and Joceline afterwards
resumed the title of Bath and Wells, wbich has continued to be used by the bishops to tbis day. He was forced into
exile by King Jobn, for having interdicted the nation, pursuant to the Pope’s command, in 1208 ; but on his return, five
years afterwards, he applied himself particularly to the improvement of the Church of Wells. IJe obtained from Hugh,
bisbop of Lincoln, the valuable manors of Congresbury, Chedder, and Axbridge, and annexed them to bis see. He
rebuilt and dedicated anew the cathedral on tbe 23d of October, 1239; added a chapel to tbe Bisbop’s Palace at Wells,
and built many otlier edifices. He died on the 19th of November, 1242, and was buried in the middle of the cboir in
Wells Cathedral, under a marble tomb inlaid with his figure in brass; but tlie latter had been torn away in Godwyn’s
time, and the tomb was “ shamefully defaced.” — History and Antiquities of tlie Cathedral Church of Wells, by J. Britton,
F.S.A., pp. 33, 34, and 106.