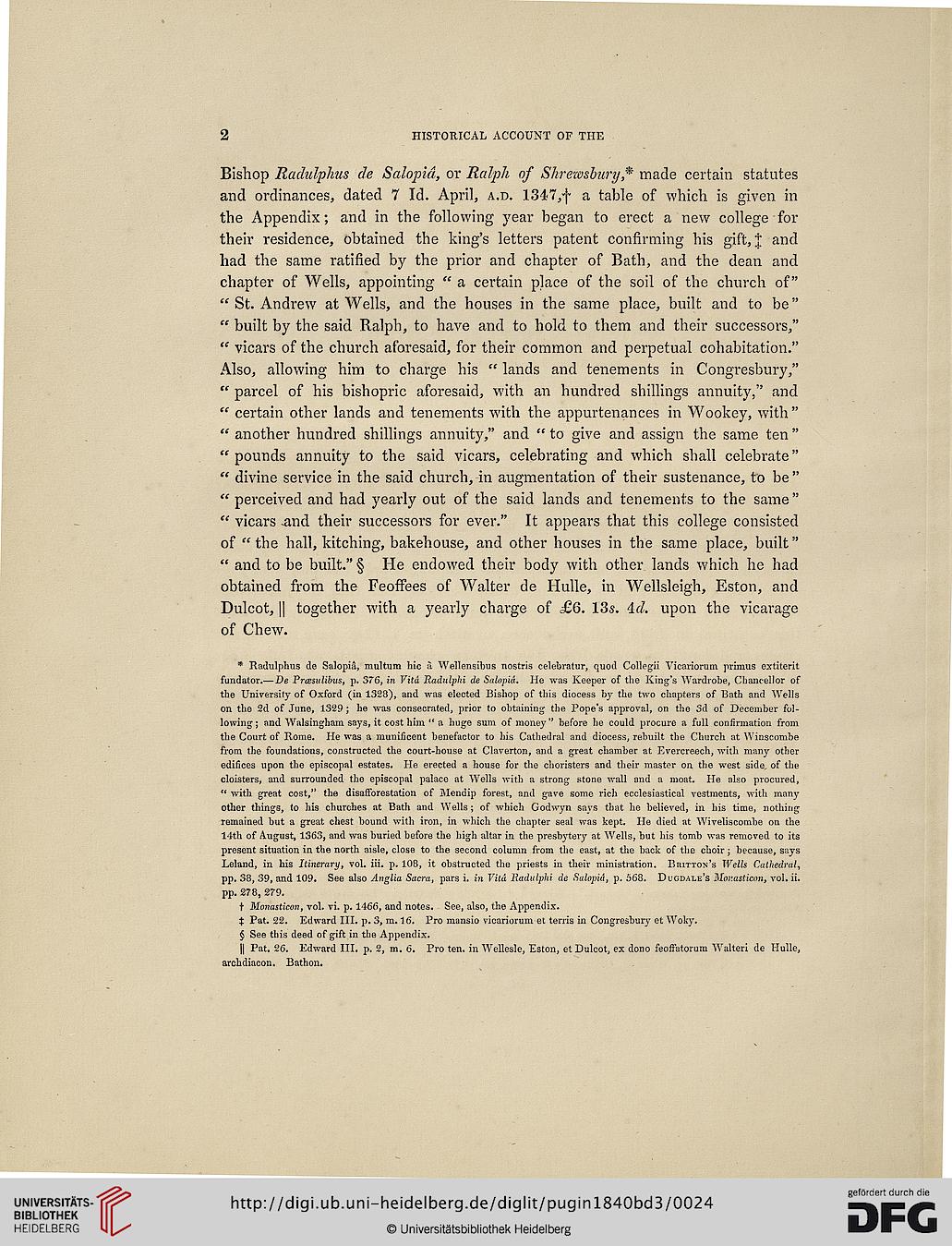 Bishop Radulphus de Salopia, or RalpJi of Shrewshury,* * * § made certain statutes
and ordinances, dated 7 Id. April, a.d. 1347,f a table of wbich is given in
tbe Appendix; and in the following year began to erect a new college for
their residence, obtained tbe king’s letters patent confirming bis gift,J and
had tbe same ratified by tbe prior and cbapter of Batb, and tbe dean and
cbapter of Wells, appointing “ a certain place of the soil of tbe church of”
“ St. Andrew at Wells, and tbe houses in the same place, built and to be”
“ built by the said Ralpb, to have and to bold to them and their successors,”
“ vicars of tbe church aforesaid, for their common and perpetual cobabitation.”
Also, allowing bim to cbarge his “ lands and tenements in Congresbury,”
“ parcel of bis bisbopric aforesaid, witb an bundred shillings annuity,” and
“ certain otber lands and tenements witb tbe appurtenances in Wookey, witb”
“ anotber hundred shillings annuity,” and “ to give and assign tbe same ten ”
“ pounds annuity to tbe said vicars, celebrating and wbich sball celebrate”
“ divine service in the said church, in augmentation of their sustenance, to be ”
“ perceived and had yearly out of tbe said lands and tenements to the same ”
“ vicars and tbeir successors for ever.” It appears tbat this college consisted
of “ tbe hall, kitching, bakebouse, and other bouses in the same place, built ”
“ and to be built.” § He endowed tbeir body witb otber lands which be had
obtained from tbe Feoffees of Walter de Hulle, in Wellsleigh, Eston, and
Dulcot, || togetber with a yearly charge of £6. 135. 4d. upon tbe vicarage
of Chew.

* Radulphus de Salopia, multum hic a Wellensibus nostris celebratur, quod Collegii Vicariorum primus extit.erit
fundator.— De Prcesulibus, p. 376, in Vitd Radulphi de Salopid. He was Keeper of the King’s Wardrobe, Cbancellor of
the Unirersity of Oxford (in 1328), and was elected Bishop of this diocess by the two chapters of Bath and Wells
on the 2d of June, 1329; he was consecrated, prior to obtaining the Pope’s approval, on the 3d of December fol-
lowing; and Walsingham says, it cost him “ a huge sum of money” before he could procure a full confirmation from
the Court of Rome. He was a munificent benefactor to his Cathedral and diocess, rebuilt the Church at Winscombe
from the foundations, constructed the court-house at Claverton, and a great cliamber at Evercreech, with many other
edifices upon the episcopal estates. He erected a house for the choristers and their master on the west side of the
cloisters, and surrounded the episcopal palace at Wells witb a strong stone wall and a moat. He also procured,
“ with great cost,” the disatforestation of Mendip forest, and gave some rich ecclesiastical vestments, with many
other things, to his churches at Bath and Wells ; of which Godwyn says that he believed, in liis time, nothing
remained but a great chest bound with iron, in wliich the cliapter seal was kept. He died at Wiveliscombe on the
14th of August, 1363, and was buried before tlie high altar in the presbyteiy at Wells, but liis tomb was removed to its
present situation in the north aisle, close to the second column from the east, at the back of the choir; because, says
Leland, in his Itinerary, vol. iii. p. 108, it obstructed the priests in their ministration. Buitton’s Wells Cathedral,
pp. 38, 39, and 109. See also Anglia Sacra, pars i. in Vitd 'Radulphi de Salopid, p. 568. Dugdale’s Mor.asticon, vol. ii.
pp. 278, 279.

§ See this deed of gift in the Appendix.