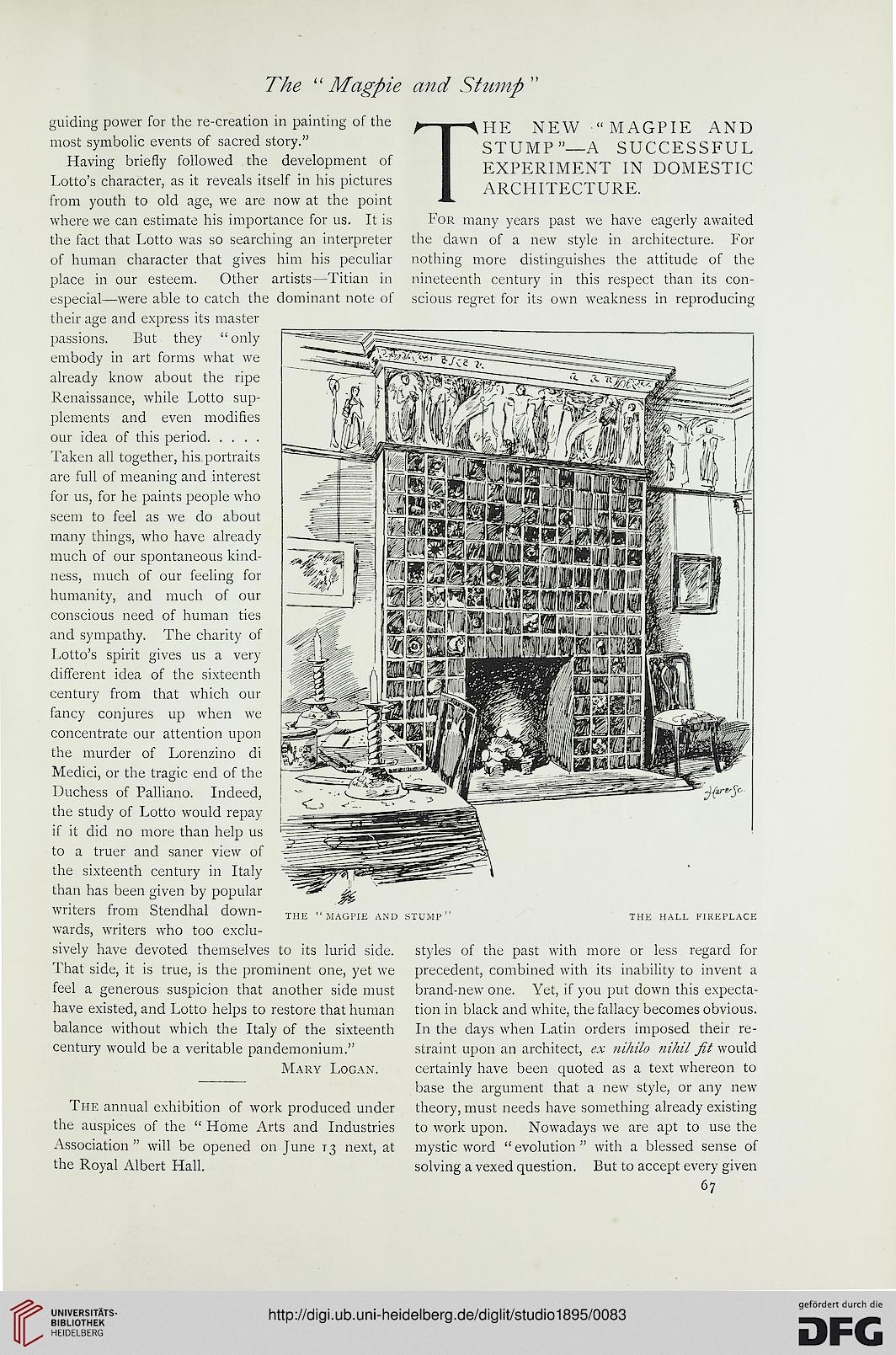 Information about OCR text
The " Magpie and Stump "

guiding power for the re-creation in painting of the ^—HE NEW "MAGPIE AND
most symbolic events of sacred story." STUMP"_A SUCCESSFUL

Having briefly followed the development of EXPERIMENT IN DOMESTIC

Lotto's character, as it reveals itself in his pictures ARCHITECTURE
from youth to old age, we are now at the point
where we can estimate his importance for us. It is For many years past we have eagerly awaited
the fact that Lotto was so searching an interpreter the dawn of a new style in architecture. For
of human character that gives him his peculiar nothing more distinguishes the attitude of the
place in our esteem. Other artists—Titian in nineteenth century in this respect than its con-
especial—were able to catch the dominant note of scious regret for its own weakness in reproducing
their age and express its master
passions. But they " only
embody in art forms what we
already know about the ripe
Renaissance, while Lotto sup-
plements and even modifies

Taken all together, his portraits
are full of meaning and interest
for us, for he paints people who
seem to feel as we do about
many things, who have already
much of our spontaneous kind-
ness, much of our feeling for
humanity, and much of our
conscious need of human ties
and sympathy. The charity of
Lotto's spirit gives us a very
different idea of the sixteenth
century from that which our
fancy conjures up when we
concentrate our attention upon
the murder of Lorenzino di
Medici, or the tragic end of the
Duchess of Palliano. Indeed,
the study of Lotto would repay
if it did no more than help us
to a truer and saner view of
the sixteenth century in Italy
than has been given by popular

writers from Stendhal down- the " magpie and stump " the hall fireplace

wards, writers who too exclu-
sively have devoted themselves to its lurid side. styles of the past with more or less regard for
That side, it is true, is the prominent one, yet we precedent, combined with its inability to invent a
feel a generous suspicion that another side must brand-new one. Yet, if you put down this expecta-
have existed, and Lotto helps to restore that human tion in black and white, the fallacy becomes obvious,
balance without which the Italy of the sixteenth In the days when Latin orders imposed their re-
century would be a veritable pandemonium." straint upon an architect, ex nihilo nihil fit would

Mary Logan. certainly have been quoted as a text whereon to
base the argument that a new style, or any new
The annual exhibition of work produced under theory, must needs have something already existing
the auspices of the " Home Arts and Industries to work upon. Nowadays we are apt to use the
Association" will be opened on June 13 next, at mystic word "evolution" with a blessed sense of
the Royal Albert Hall. solving a vexed question. But to accept every given