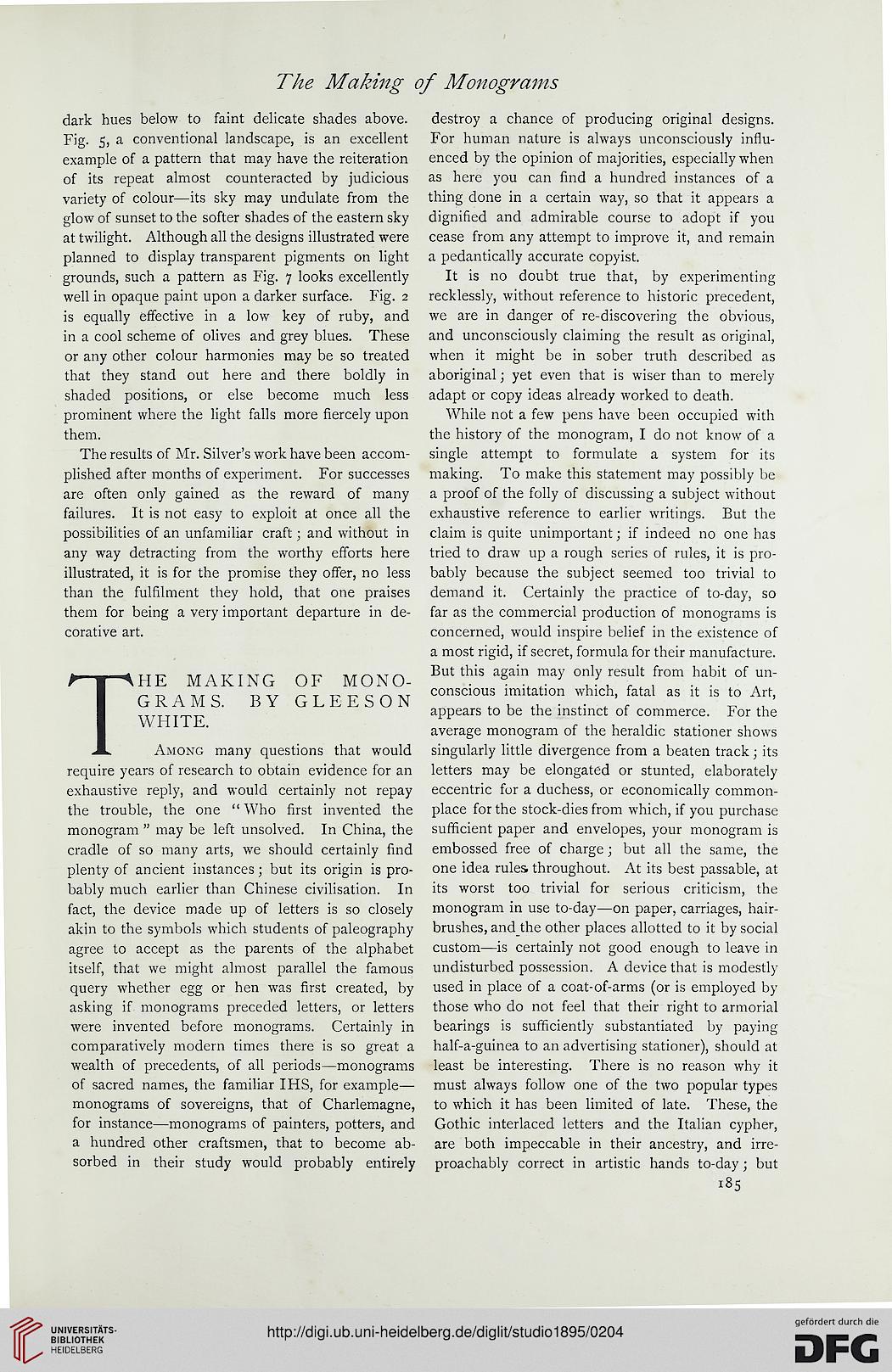 Information about OCR text
The Making of Monograms

dark hues below to faint delicate shades above.
Fig. 5, a conventional landscape, is an excellent
example of a pattern that may have the reiteration
of its repeat almost counteracted by judicious
variety of colour—its sky may undulate from the
glow of sunset to the softer shades of the eastern sky
at twilight. Although all the designs illustrated were
planned to display transparent pigments on light
grounds, such a pattern as Fig. 7 looks excellently
well in opaque paint upon a darker surface. Fig. 2
is equally effective in a low key of ruby, and
in a cool scheme of olives and grey blues. These
or any other colour harmonies may be so treated
that they stand out here and there boldly in
shaded positions, or else become much less
prominent where the light falls more fiercely upon
them.

The results of Mr. Silver's work have been accom-
plished after months of experiment. For successes
are often only gained as the reward of many
failures. It is not easy to exploit at once all the
possibilities of an unfamiliar craft; and without in
any way detracting from the worthy efforts here
illustrated, it is for the promise they offer, no less
than the fulfilment they hold, that one praises
them for being a very important departure in de-
corative art.

THE MAKING OF MONO-
GRAMS. BY GLEESON
WHITE.
Among many questions that would
require years of research to obtain evidence for an
exhaustive reply, and would certainly not repay
the trouble, the one " Who first invented the
monogram " may be left unsolved. In China, the
cradle of so many arts, we should certainly find
plenty of ancient instances; but its origin is pro-
bably much earlier than Chinese civilisation. In
fact, the device made up of letters is so closely
akin to the symbols which students of paleography
agree to accept as the parents of the alphabet
itself, that we might almost parallel the famous
query whether egg or hen was first created, by
asking if monograms preceded letters, or letters
were invented before monograms. Certainly in
comparatively modern times there is so great a
wealth of precedents, of all periods—monograms
of sacred names, the familiar IHS, for example—
monograms of sovereigns, that of Charlemagne,
for instance—monograms of painters, potters, and
a hundred other craftsmen, that to become ab-
sorbed in their study would probably entirely

destroy a chance of producing original designs.
For human nature is always unconsciously influ-
enced by the opinion of majorities, especially when
as here you can find a hundred instances of a
thing done in a certain way, so that it appears a
dignified and admirable course to adopt if you
cease from any attempt to improve it, and remain
a pedantically accurate copyist.

It is no doubt true that, by experimenting
recklessly, without reference to historic precedent,
we are in danger of re-discovering the obvious,
and unconsciously claiming the result as original,
when it might be in sober truth described as
aboriginal; yet even that is wiser than to merely
adapt or copy ideas already worked to death.

While not a few pens have been occupied with
the history of the monogram, I do not know of a
single attempt to formulate a system for its
making. To make this statement may possibly be
a proof of the folly of discussing a subject without
exhaustive reference to earlier writings. But the
claim is quite unimportant; if indeed no one has
tried to draw up a rough series of rules, it is pro-
bably because the subject seemed too trivial to
demand it. Certainly the practice of to-day, so
far as the commercial production of monograms is
concerned, would inspire belief in the existence of
a most rigid, if secret, formula for their manufacture.
But this again may only result from habit of un-
conscious imitation which, fatal as it is to Art,
appears to be the instinct of commerce. For the
average monogram of the heraldic stationer shows
singularly little divergence from a beaten track; its
letters may be elongated or stunted, elaborately
eccentric for a duchess, or economically common-
place for the stock-dies from which, if you purchase
sufficient paper and envelopes, your monogram is
embossed free of charge ; but all the same, the
one idea rules, throughout. At its best passable, at
its worst too trivial for serious criticism, the
monogram in use to-day—on paper, carriages, hair-
brushes, and the other places allotted to it by social
custom—is certainly not good enough to leave in
undisturbed possession. A device that is modestly
used in place of a coat-of-arms (or is employed by
those who do not feel that their right to armorial
bearings is sufficiently substantiated by paying
half-a-guinea to an advertising stationer), should at
least be interesting. There is no reason why it
must always follow one of the two popular types
to which it has been limited of late. These, the
Gothic interlaced letters and the Italian cypher,
are both impeccable in their ancestry, and irre-
proachably correct in artistic hands to-day; but