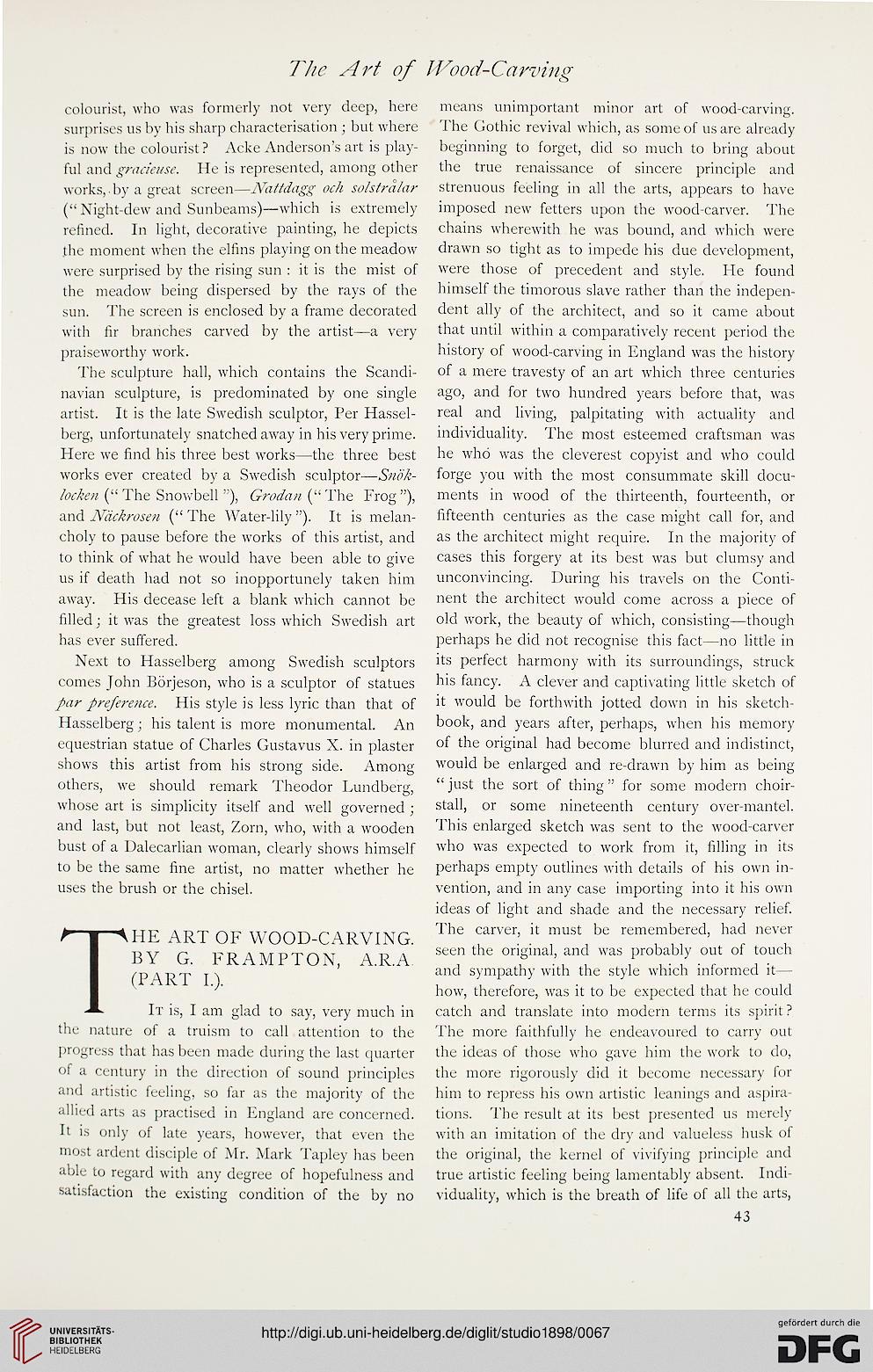 Information about OCR text
The Art of Wood-Carving

colourist, who was formerly not very deep, here
surprises us by his sharp characterisation ; but where
is now the colourist ? Acke Anderson's art is play-
ful and gracieuse. He is represented, among other
works,-by a great screen—Nattdagg och solstralar
(" Night-dew and Sunbeams)—which is extremely
refined. In light, decorative painting, he depicts
the moment when the elfins playing on the meadow
were surprised by the rising sun : it is the mist of
the meadow being dispersed by the rays of the
sun. The screen is enclosed by a frame decorated
with fir branches carved by the artist—a very
praiseworthy wrork.

The sculpture hall, which contains the Scandi-
navian sculpture, is predominated by one single
artist. It is the late Swedish sculptor, Per Hassel-
berg, unfortunately snatched away in his very prime.
Here we find his three best works—the three best
works ever created by a Swedish sculptor—Snok-
locken (" The Snowbell "), Grodan (" The Frog "),
and Ndckrosen (" The Water-lily "). It is melan-
choly to pause before the works of this artist, and
to think of what he wrould have been able to give
us if death had not so inopportunely taken him
away. His decease left a blank wThich cannot be
filled • it was the greatest loss which Swedish art
has ever suffered.

Next to Hasselberg among Swedish sculptors
comes John Borjeson, who is a sculptor of statues
par preference. His style is less lyric than that of
Hasselberg; his talent is more monumental. An
equestrian statue of Charles Gustavus X. in plaster
shows this artist from his strong side. Among
others, we should remark Theodor Lundberg,
whose art is simplicity itself and well governed ;
and last, but not least, Zorn, who, with a wooden
bust of a Dalecarlian woman, clearly shows himself
to be the same fine artist, no matter whether he
uses the brush or the chisel.

THE ART OF WOOD-CARVING.
BY G. FRAMPTON, A.R.A
(PART I.).
It is, I am glad to say, very much in
the nature of a truism to call attention to the
progress that has been made during the last quarter
of a century in the direction of sound principles
and artistie feeling, so far as the majority of the
allied arts as practised in England are concerned.
It is only of late years, however, that even the
most ardent diseiple of Mr. Mark Tapley has been
able to regard with any degree of hopefulness and
satisfaction the existing condition of the by no

means unimportant minor art of wood-carving.
The Gothic revival which, as some of us are already
beginning to forget, did so much to bring about
the true renaissance of sincere principle and
strenuous feeling in all the arts, appears to have
imposed new fetters upon the wood-carver. The
chains wherewith he was bound, and which were
drawn so tight as to impede his due development,
were those of precedent and style. He found
himself the timorous slave rather than the indepen-
dent ally of the architect, and so it came about
that until within a comparatively recent period the
history of wood-carving in England was the history
of a mere travesty of an art which three centuries
ago, and for two hundred years before that, was
real and living, palpitating with actuality and
individuality. The most esteemed craftsman wras
he who was the cleverest copyist and who could
forge you with the most consummate skill docu-
ments in wTood of the thirteenth, fourteenth, or
fifteenth centuries as the case might call for, and
as the architect might require. In the majority of
cases this forgery at its best wras but clumsy and
unconvincing. During his travels on the Conti-
nent the architect would come across a piece of
old wrork, the beauty of which, consisting—though
perhaps he did not recognise this fact—no little in
its perfect harmony with its surroundings, struck
his fancy. A clever and captivating little sketch of
it wrould be forthwith jotted down in his sketch-
book, and years after, perhaps, when his memory
of the original had become blurred and indistinct,
wrould be enlarged and re-drawn by him as being
"just the sort of thing" for some modern choir-
stall, or some nineteenth century over-mantel.
This enlarged sketch was sent to the wood-carver
who was expected to work from it, filling in its
perhaps empty outlines with details of his own in-
vention, and in any case importing into it his own
ideas of light and shade and the necessary relief.
The carver, it must be remembered, had never
seen the original, and wTas probably out of touch
and sympathy with the style which informed it-
how, therefore, was it to be expected that he could
catch and translate into modern terms its spirit ?
The more faithfully he endeavoured to carry out
the ideas of those who gave him the work to do,
the more rigorously did it become necessary for
him to repress his own artistic leanings and aspira
tions. The result at its best presented us merely
with an imitation of the dry and valueless husk of
the original, the kernel of vivifying principle and
true artistic feeling being lamentably absent. Indi-
viduality, which is the breath of life of all the arts,