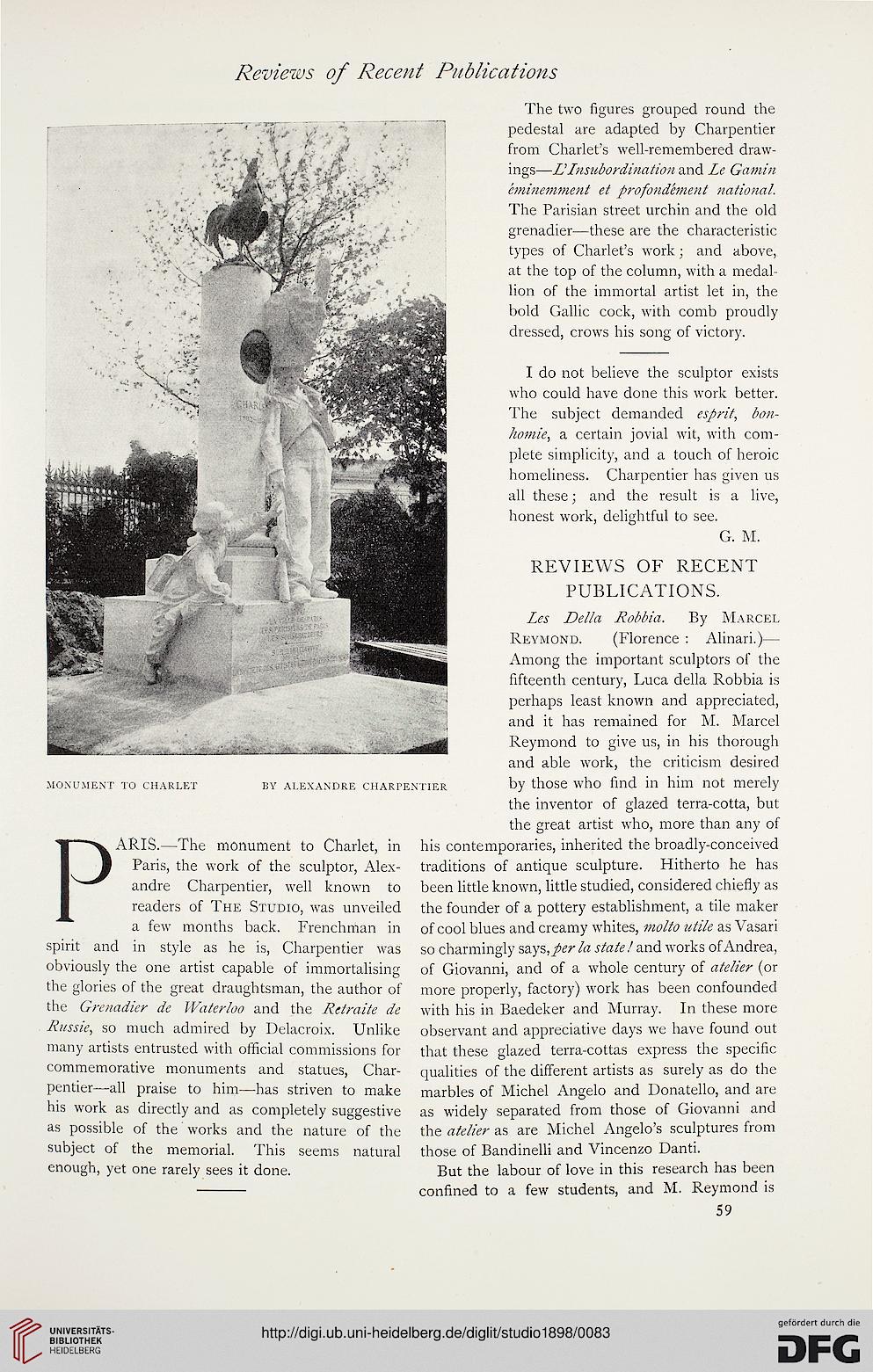 The two figures grouped round the
pedestal are adapted by Charpentier
from Charlet's well-remembered draw-
ings—B Insubordination and Le Gamin
eminemment et profondement national.
The Parisian street urchin and the old
grenadier—these are the characteristic
types of Charlet's work; and above,
at the top of the column, with a medal-
lion of the immortal artist let in, the
bold Gallic cock, with comb proudly
dressed, crows his song of victory.

I do not believe the sculptor exists
who could have done this work better.
The subject demanded esprit, bon-
homie, a certain jovial wit, with com-
plete simplicity, and a touch of heroic
homeliness. Charpentier has given us
all these; and the result is a live,
honest work, delightful to see.

Les Delia Robbia. By Marcel
Reymond. (Florence : Alinari.)—
Among the important sculptors of the
fifteenth century, Luca della Robbia is
perhaps least known and appreciated,
and it has remained for M. Marcel
Reymond to give us, in his thorough
and able work, the criticism desired
monument to charlet by Alexandre charpentier by those who find in him not merely

the inventor of glazed terra-cotta, but
the great artist who, more than any of

PARIS.—The monument to Charlet, in his contemporaries, inherited the broadly-conceived
Paris, the work of the sculptor, Alex- traditions of antique sculpture. Hitherto he has
andre Charpentier, well known to been little known, little studied, considered chiefly as
readers of The Studio, was unveiled the founder of a pottery establishment, a tile maker
a few months back. Frenchman in of cool blues and creamy whites, molto utile as Vasari
spirit and in style as he is, Charpentier was so charminglysays,per la state! and works of Andrea,
obviously the one artist capable of immortalising of Giovanni, and of a whole century of atelier (or
the glories of the great draughtsman, the author of more properly, factory) work has been confounded
the Grenadier de Waterloo and the Retraite de with his in Baedeker and Murray. In these more
Russie, so much admired by Delacroix. Unlike observant and appreciative days we have found out
many artists entrusted with official commissions for that these glazed terra-cottas express the specific
commemorative monuments and statues, Char- qualities of the different artists as surely as do the
pentier—all praise to him—has striven to make marbles of Michel Angelo and Uonatello, and are
his work as directly and as completely suggestive as widely separated from those of Giovanni and
as possible of the works and the nature of the the atelier as are Michel Angelo's sculptures from
subject of the memorial. This seems natural those of Bandinelli and Vincenzo Danti.
enough, yet one rarely sees it done. But the labour of love in this research has been

- confined to a few students, and M. Reymond is