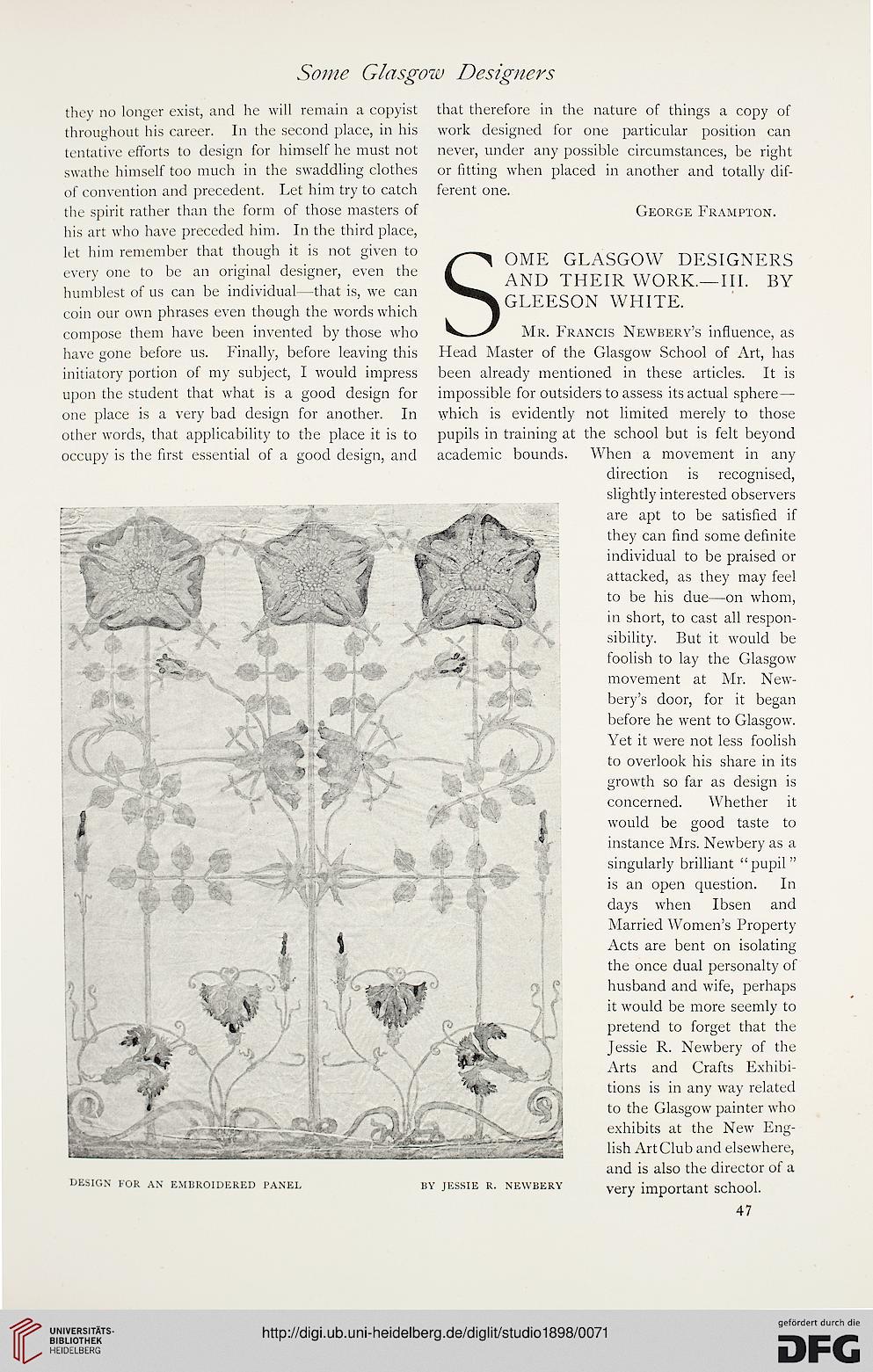 they no longer exist, and he will remain a copyist that therefore in the nature of things a copy of

throughout his career. In the second place, in his work designed for one particular position can

tentative efforts to design for himself he must not never, under any possible circumstances, be right

of convention and precedent. Let him try to catch ferent one.

the spirit rather than the form of those masters of George Frampton.

his art who have preceded him. In the third place,

AND THEIR WORK.—III. BY
GLEESON WHITE.

every one to be an original designer, even the
humblest of us can be individual—that is, wTe can
coin our own phrases even though the words which

compose them have been invented by those who __S Mr. Francis Npjwbery's influence, as

have gone before us. Finally, before leaving this Head Master of the Glasgow School of Art, has
initiatory portion of my subject, I wrould impress been already mentioned in these articles. It is
upon the student that wThat is a good design for impossible for outsiders to assess its actual sphere—
one place is a very bad design for another. In which is evidently not limited merely to those
other words, that applicability to the place it is to pupils in training at the school but is felt beyond
occupy is the first essential of a good design, and academic bounds. When a movement in any

direction is recognised,
slightly interested observers
^u- are apt to be satisfied if

they can find some definite
individual to be praised or
attacked, as they may feel
to be his due—on whom,
in short, to cast all respon-
sibility. But it wTould be
foolish to lay the Glasgow

movement at Mr. Newr-
' bery's door, for it began

before he went to Glasgow.
Yet it were not less foolish
to overlook his share in its
growth so far as design is
concerned. Whether it
w7ould be good taste to
instance Mrs. Newbery as a
singularly brilliant "pupil"
is an open question. In
days when Ibsen and
Married Women's Property
Acts are bent on isolating
the once dual personalty of
husband and wife, perhaps
it would be more seemly to
pretend to forget that the
Jessie R. Newbery of the
Arts and Grafts Exhibi-
tions is in any way related
to the Glasgow painter who
exhibits at the New Eng-
lish Art Club and elsewhere,
and is also the director of a