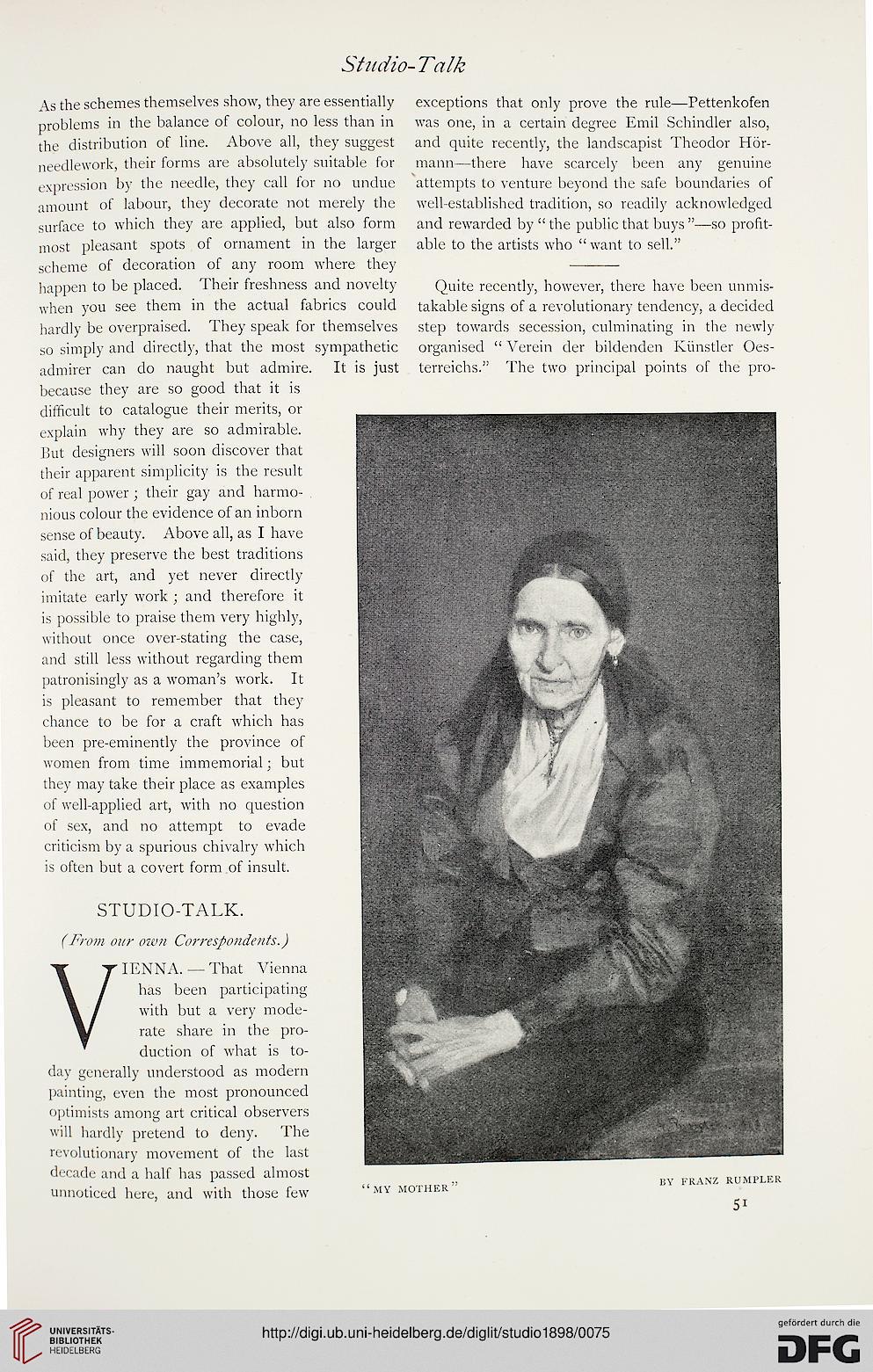 As the schemes themselves show, they are essentially exceptions that only prove the rule—Pettenkofen
problems in the balance of colour, no less than in was one, in a certain degree Emil Schindler also,
the distribution of line. Above all, they suggest and quite recently, the landscapist Theodor Hbr-
needlework, their forms are absolutely suitable for mann—there have scarcely been any genuine
expression by the needle, they call for no undue attempts to venture beyond the safe boundaries of
amount of labour, they decorate not merely the well-established tradition, so readily acknowledged
surface to which they are applied, but also form and rewarded by " the public that buys "—so profit-
most pleasant spots of ornament in the larger able to the artists who " want to sell."
scheme of decoration of any room where they -

happen to be placed. Their freshness and novelty Quite recently, however, there have been unmis-
when you see them in the actual fabrics could takable signs of a revolutionary tendency, a decided
hardly be overpraised. They speak for themselves step towards secession, culminating in the newly
so simply and directly, that the most sympathetic organised " Verein der bildenden Kiinstler Oes-
admirer can do naught but admire. It is just terreichs." The two principal points of the pro-
because they are so good that it is
difficult to catalogue their merits, or
explain why they are so admirable.
But designers will soon discover that
their apparent simplicity is the result
of real power ; their gay and harmo-
nious colour the evidence of an inborn
sense of beauty. Above all, as I have
said, they preserve the best traditions
of the art, and yet never directly
imitate early work ; and therefore it
is possible to praise them very highly,
without once over-stating the case,
and still less without regarding them
patronisingly as a woman's work. It
is pleasant to remember that they
chance to be for a craft which has
been pre-eminently the province of
women from time immemorial; but
they may take their place as examples
of well-applied art, with no question
of sex, and no attempt to evade
criticism by a spurious chivalry which
is often but a covert form of insult.

VIENNA.— That Vienna
has been participating
with but a very mode-
rate share in the pro-
duction of what is to-
day generally understood as modern
painting, even the most pronounced
optimists among art critical observers
will hardly pretend to deny. The
revolutionary movement of the last
decade and a half has passed almost

unnoticed here, and with those few my mother