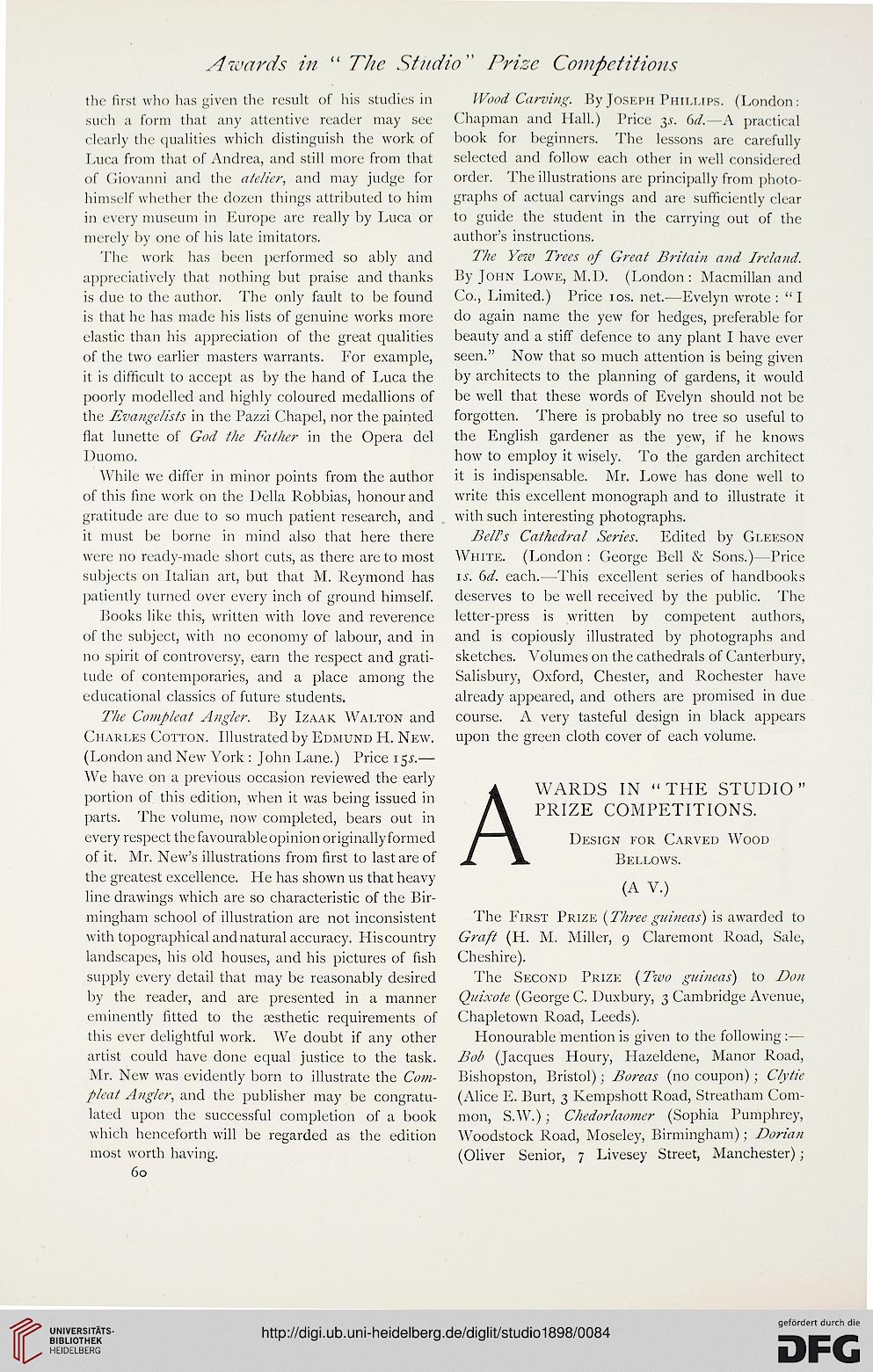 Information about OCR text
Awards in u The Studio" Prize Competitions

the first who has given the result of his studies in
such a form that any attentive reader may see
clearly the qualities which distinguish the work of
Luca from that of Andrea, and still more from that
of Giovanni and the atelier^ and may judge for
himself whether the do/en things attributed to him
in every museum in Europe are really by Luca or
merely by one of his late imitators.

The work has been performed so ably and
appreciatively that nothing but praise and thanks
is due to the author. The only fault to be found
is that he has made his lists of genuine works more
elastic than his appreciation of the great qualities
of the two earlier masters warrants. For example,
it is difficult to accept as by the hand of Luca the
poorly modelled and highly coloured medallions of
the Evangelists in the Pazzi Chapel, nor the painted
flat lunette of God the Father in the Opera del
Duomo.

While we differ in minor points from the author
of this fine work on the Delia Robbias, honour and
gratitude are due to so much patient research, and
it must be borne in mind also that here there
were no ready-made short cuts, as there are to most
subjects on Italian art, but that M. Reymond has
patiently turned over every inch of ground himself.

Books like this, written writh love and reverence
of the subject, with no economy of labour, and in
no spirit of controversy, earn the respect and grati-
tude of contemporaries, and a place among the
educational classics of future students.

The Compleat Angler. By Izaak Walton and
Charles Cotton. Illustrated by Edmund H. New.
(London and New York : John Lane.) Price 15.?.—
We have on a previous occasion reviewed the early
portion of this edition, when it wTas being issued in
parts. The volume, now completed, bears out in
every respect the favourable opinion originally formed
of it. Mr. New's illustrations from first to last are of
the greatest excellence. He has shown us that heavy
line drawings wThich are so characteristic of the Bir-
mingham school of illustration are not inconsistent
with topographical and natural accuracy. His country
landscapes, his old houses, and his pictures of fish
supply every detail that may be reasonably desired
by the reader, and are presented in a manner
eminently fitted to the aesthetic requirements of
this ever delightful work. We doubt if any other
artist could have done equal justice to the task.
Mr. New was evidently born to illustrate the Com-
pleat Angler, and the publisher may be congratu-
lated upon the successful completion of a book
which henceforth will be regarded as the edition
most worth having.
60

Wood Carving. By JOSEPH PHILLIPS. (London:
Chapman and Hall.) Price $s. (id. A practical
book for beginners. The lessons are carefully
selected and follow each other in well considered
order. The illustrations are principally from photo
graphs of actual carvings and are sufficiently clear
to guide the student in the carrying out of the
author's instructions.

The Yew Trees of Great Britain and Ireland.
By John Lowe, M.I). (London: Macmillan and
Co., Limited.) Price 10s. net.—Evelyn wrrote : "I
do again name the yew for hedges, preferable for
beauty and a stiff defence to any plant I have ever
seen." Now that so much attention is being given
by architects to the planning of gardens, it would
be well that these words of Evelyn should not be
forgotten. There is probably no tree so useful to
the English gardener as the yewr, if he knows
how to employ it wrisely. To the garden architect
it is indispensable. Mr. Lowe has done well to
write this excellent monograph and to illustrate it
with such interesting photographs.

Bell's Cathedral Series. Edited by Gleeson
White. (London : George Bell & Sons.)—Price
is. 6d. each.—This excellent series of handbooks
deserves to be wrell received by the public. The
letter-press is written by competent authors,
and is copiously illustrated by photographs and
sketches. Volumes on the cathedrals of Canterbury,
Salisbury, Oxford, Chester, and Rochester have
already appeared, and others are promised in due
course. A very tasteful design in black appears
upon the green cloth cover of each volume.