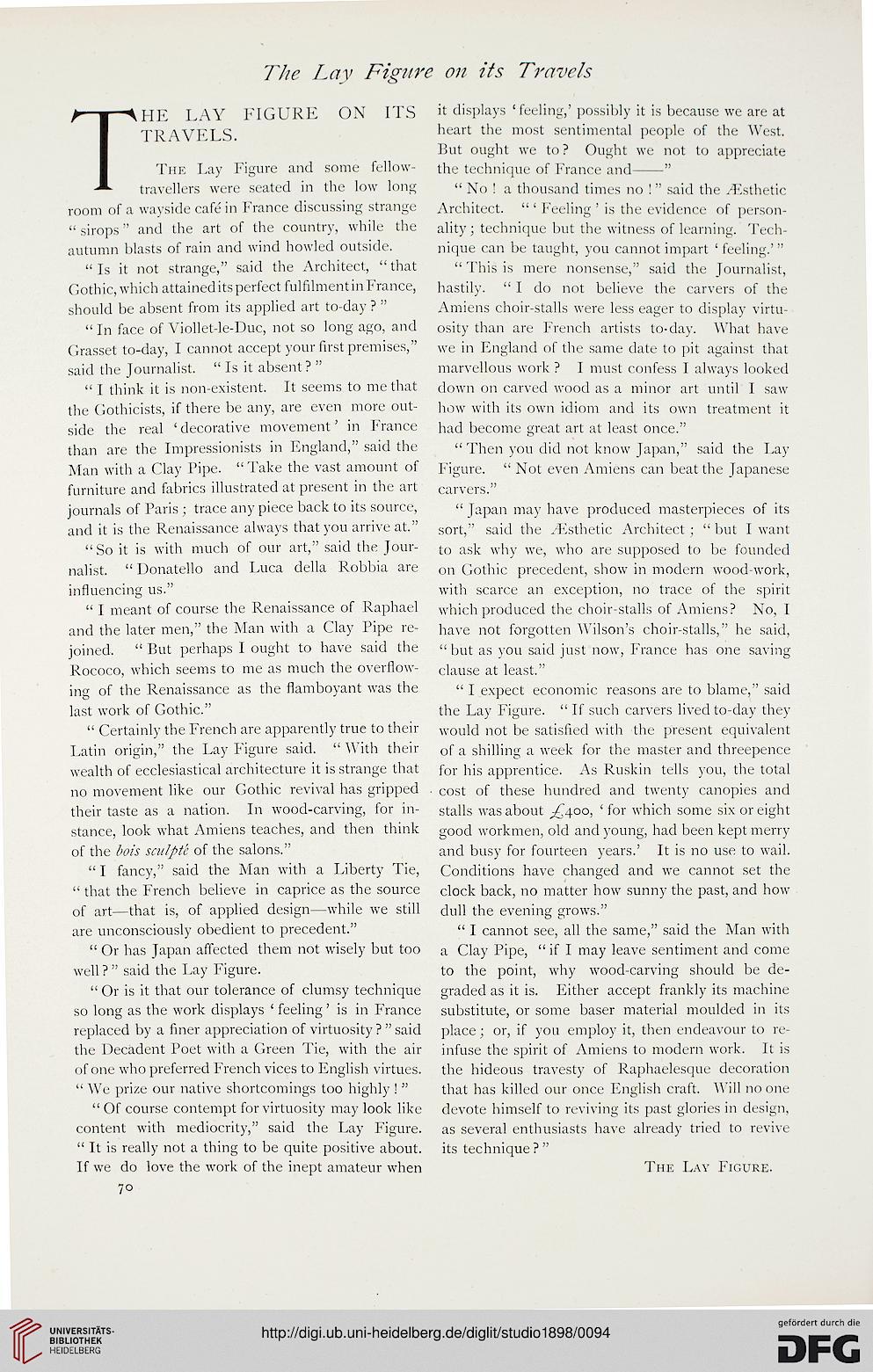 Information about OCR text
VV/e Lav Figure on its Travels

III-; LAY FIGURE ON ITS
TRAVELS.

room of a wayside cafe* in France discussing strange
" sirops" and the art of the country, while the
autumn blasts of rain and wind howled outside.

"Is it not strange," said the Architect., "that
Gothic, which attainedits perfect fulfilment in France,
should be absent from its applied art to-day ? "

" In face of Yiollet-le-Duc, not so long ago, and
Grasset to-day, I cannot accept your first premises,"
said the Journalist. " Is it absent ? "

" I think it is non-existent. It seems to me that
the Gothicists, if there be any, are even more out-
side the real 'decorative movement' in France
than are the Impressionists in England," said the
Man with a Clay Pipe, "lake the vast amount of
furniture and fabrics illustrated at present in the art
journals of Paris ; trace any piece back to its source,
and it is the Renaissance always that you arrive at."

"So it is with much of our art," said the Jour-
nalist. " Donatello and Luca della Robbia are
influencing us."

" I meant of course the Renaissance of Raphael
and the later men," the Man with a Clay Pipe re-
joined. " But perhaps I ought to have said the
Rococo, which seems to me as much the overflow-
ing of the Renaissance as the flamboyant was the
last work of Gothic."

" Certainly the French are apparently true to their
Latin origin," the Lay Figure said. " With their
wealth of ecclesiastical architecture it is strange that
no movement like our Gothic revival has gripped
their taste as a nation. In wood-carving, for in-
stance, look what Amiens teaches, and then think
of the bois sculptc of the salons."

" I fancy," said the Man with a Liberty Tie,
" that the French believe in caprice as the source
of art—that is, of applied design—while we still
are unconsciously obedient to precedent."

" Or has Japan affected them not wisely but too
well ? " said the Lay Figure.

" Or is it that our tolerance of clumsy technique
so long as the work displays ' feeling' is in France
replaced by a finer appreciation of virtuosity ? " said
the Decadent Poet with a Green Tie, with the air
of one who preferred French vices to English virtues.
" We prize our native shortcomings too highly ! "

" Of course contempt for virtuosity may look like
content with mediocrity," said the Lay Figure.
" It is really not a thing to be quite positive about.
If we do love the work of the inept amateur when
70

it displays 'feeling,' possibly it is because we are at
heart the most sentimental people of the West.
But ought we to? Ought we not to appreciate
the technique of France and-"

" No ! a thousand times no ! " said the Esthetic
Architect. " ' Feeling ' is the evidence of person-
ality ; technique but the witness of learning. Tech-
nique can be taught, you cannot impart ' feeling.'"

"This is mere nonsense," said the Journalist,
hastily. " I do not believe the carvers of the
Amiens choir-stalls were less eager to display virtu
osity than are French artists to-day. What have
we in England of the same date to pit against that
marvellous work? I must confess I always looked
down on carved wood as a minor art until I saw-
how with its own idiom and its own treatment it
had become great art at least once."

"Then you did not know Japan," said the Lay
Figure. " Not even Amiens can beat the Japanese
carvers."

" Japan may have produced masterpieces of its
sort," said the /Esthetic Architect ; " but I want
to ask why we, who are supposed to be founded
on Gothic precedent, show in modern wood-work,
with scarce an exception, no trace of the spirit
which produced the choir-stalls of Amiens? No, I
have not forgotten Wilson's choir-stalls," he said,
"but as you said just now, France has one saving
clause at least."

" I expect economic reasons are to blame," said
the Lay Figure. " If such carvers lived to-day they
would not be satisfied with the present equivalent
of a shilling a week for the master and threepence
for his apprentice. As Ruskin tells you, the total
cost of these hundred and twenty canopies and
stalls was about ^400, ' for which some six or eight
good workmen, old and young, had been kept merry
and busy for fourteen years.' It is no use to wail.
Conditions have changed and we cannot set the
clock back, no matter how sunny the past, and how
dull the evening grows."

" I cannot see, all the same," said the Man with
a Clay Pipe, " if I may leave sentiment and come
to the point, why wood-carving should be de-
graded as it is. Either accept frankly its machine
substitute, or some baser material moulded in its
place; or, if you employ it, then endeavour to re-
infuse the spirit of Amiens to modern work. It is
the hideous travesty of Raphaelesque decoration
that has killed our once English craft. Will no one
devote himself to reviving its past glories in design,
as several enthusiasts have already tried to revive
its technique ? "