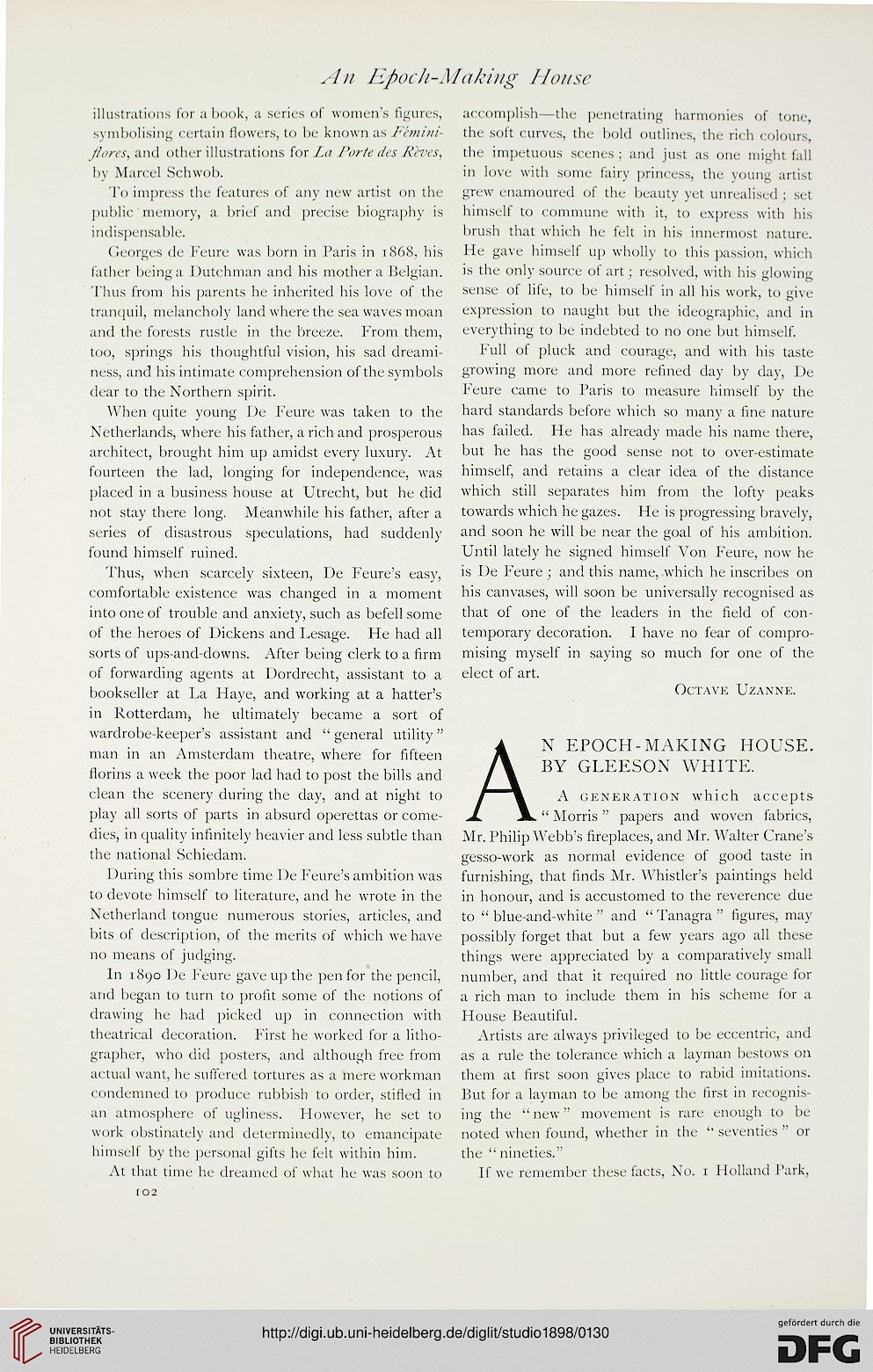 Information about OCR text
An Epoch-Making I louse

To impress the features ol any new artist on the
public memory, a brief and precise biography is
indispensable.

Georges de Feure was horn in Paris in 1868, his
father being a Dutchman and his mother a Belgian.
Thus from his parents he inherited his love of the
tranquil, melancholy land where the sea waves moan
and the forests rustle in the breeze. From them,
too, springs his thoughtful vision, his sad dreami-
ness, and his intimate comprehension of the symbols
dear to the Northern spirit.

When quite young De Feure was taken to the
Netherlands, where his father, a rich and prosperous
architect, brought him up amidst every luxury. At
fourteen the lad, longing for independence, was
placed in a business house at Utrecht, but he did
not stay there long. Meanwhile his father, after a
series of disastrous speculations, had suddenly
found himself ruined.

Thus, when scarcely sixteen, De Feure's easy,
comfortable existence was changed in a moment
into one of trouble and anxiety, such as befell some
of the heroes of Dickens and Lesage. He had all
sorts of ups-and-downs. After being clerk to a firm
of forwarding agents at Dordrecht, assistant to a
bookseller at La Haye, and working at a hatter's
in Rotterdam, he ultimately became a sort of
wardrobe-keeper's assistant and " general utility"
man in an Amsterdam theatre, where for fifteen
florins a week the poor lad had to post the bills and
clean the scenery during the day, and at night to
play all sorts of parts in absurd operettas or come-
dies, in quality infinitely heavier and less subtle than
the national Schiedam.

1 Hiring this sombre time De Feure's ambition was
to devote himself to literature, and he wrote in the
Xetherland tongue numerous stories, articles, and
bits of description, of the merits of which we have
no means of judging.

In 1 890 1 )e Feure gave up the pen for the pencil,
and began to turn to profit some of the notions of
drawing he had picked up in connection with
theatrical decoration. First he worked for a litho-
grapher, who did posters, and although free from
actual want, he suffered tortures as a mere workman
condemned to produce rubbish to order, stilled in
an atmosphere of ugliness. However, he set to
work obstinately and determinedly, to emancipate
himself by the personal gifts he felt within him.

accomplish—the penetrating harmonies of tone,
the soft curves, the bold outlines, the rich colours,
the impetuous scenes : and just as one might fall
in love with some fairy princess, the young artist
grew enamoured of the beauty yet unrealised ; set
himself to commune with it. to express with his
brush that which he felt in his innermost nature.
He gave himself up wholly to this passion, which
is the only source of art ; resolved, with his glowing
sense of life, to be himself in all his work, to give
expression to naught but the ideographic, and in
everything to be indebted to no one but himself.

Full of pluck and courage, and with his taste
growing more and more refined day by day, De
Feure came to Paris to measure himself by the
hard standards before which so many a fine nature-
has failed. He has already made his name there,
but he has the good sense not to over-estimate
himself, and retains a clear idea of the distance
which still separates him from the lofty peaks
towards which he gazes. He is progressing bravely,
and soon he will be near the goal of his ambition.
Until lately he signed himself Von Feure, now he
is De Feure ; and this name, which he inscribes on
his canvases, will soon be universally recognised as
that of one of the leaders in the field of con-
temporary decoration. I have no fear of compro-
mising myself in saying so much for one of the
elect of art.

An f:poch-making house.
by gleeson whitf:.
a generation which accepts
" Morris" papers and woven fabrics,
Air. Philip Webb's fireplaces, and Mr. Walter Crane's
gesso-work as normal evidence of good taste in
furnishing, that finds Mr. Whistler's paintings held
in honour, and is accustomed to the reverence due
to " blue-and-while " and " Tanagra *' figures, may
possibly forget that but a few years ago all these
things were appreciated by a comparatively small
number, and that it required no little courage tor
a rich man to include them in his scheme for a
House Beautiful.

Artists are always privileged to be eccentric, and
as a rule the tolerance which a layman bestows on
them at first soon gives place to rabid imitations.
Tut for a layman to be among the first in recognis-
ing the "new"' movement is rare enough to be
noted when found, whether in the "seventies" or
the " nineties."

If we remember these tin ts, No. 1 Holland Park,