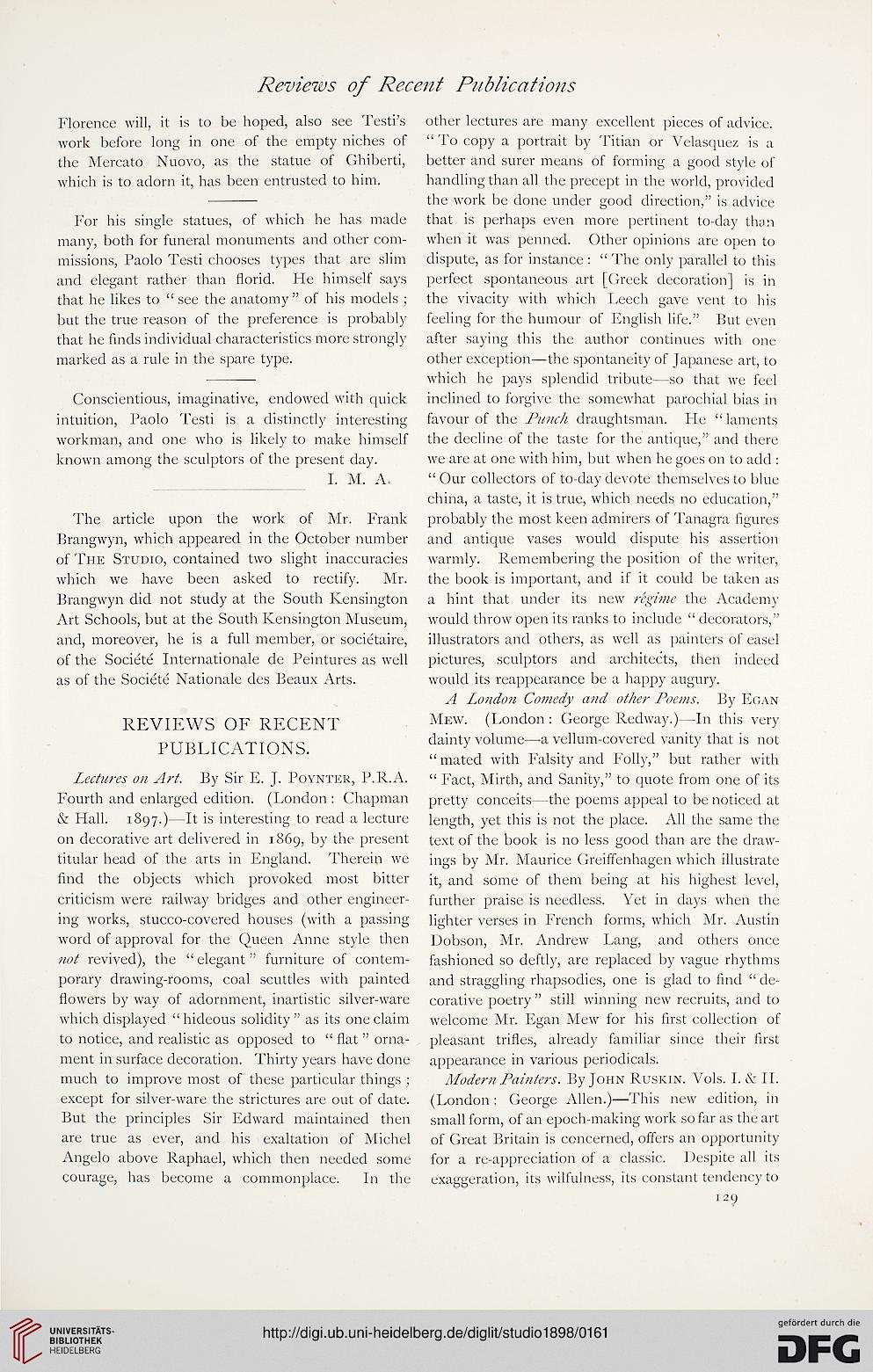 Florence will, it is to be hoped, also see Testi's other lectures are many excellent pieces of advice,

the Mercato Nuovo, as the statue of Ghiberti, better and surer means of forming a good style of

which is to adorn it, has been entrusted to him. handling than all the precept in the world, provided

- the work be done under good direction," is advice

For his single statues, of which he has made that is perhaps even more pertinent to-day than

many, both for funeral monuments and other com- when it was penned. Other opinions are open to

missions, Paolo Testi chooses types that are slim dispute, as for instance : " The only parallel to this

and elegant rather than florid. He himself says perfect spontaneous art [Greek decoration] is in

that he likes to " see the anatomy " of his models ; the vivacity with which Leech gave vent to his

but the true reason of the preference is probably feeling for the humour of English life." But even

marked as a rule in the spare type. other exception—the spontaneity of Japanese art, to

- which he pays splendid tribute—so that we feel

Conscientious, imaginative, endowed with quick inclined to forgive the somewhat parochial bias in

intuition, Paolo Testi is a distinctly interesting favour of the Punch draughtsman. He " laments

workman, and one who is likely to make himself the decline of the taste for the antique," and there

known among the sculptors of the present day. we are at one with him, but when he goes on to add :

I. M. A, " Our collectors of to-day devote themselves to blue
china, a taste, it is true, which needs no education,"

The article upon the work of Mr. Frank probably the most keen admirers of Tanagra figures

Brangwyn, which appeared in the October number and antique vases would dispute his assertion

of The Studio, contained two slight inaccuracies warmly. Remembering the position of the writer,

which we have been asked to rectify. Mr. the book is important, and if it could be taken as

Art Schools, but at the South Kensington Museum, would throw open its ranks to include " decorators,"

and, moreover, he is a full member, or societaire, illustrators and others, as well as painters of easel

of the Societe Internationale de Peintures as well pictures, sculptors and architects, then indeed

as of the Societe Nationale des Beaux Arts. would its reappearance be a happy augury.

A London Comedy and other Poems. By Egan

"mated with Falsity and .bolly, but rather with
Lectures on Art. By Sir E. J. Poynter, P.R.A. " Fact, Mirth, and Sanity," to quote from one of its
Fourth and enlarged edition. (London : Chapman pretty conceits—the poems appeal to be noticed at
& Hall. 1897.)—It is interesting to read a lecture length, yet this is not the place. All the same the
on decorative art delivered in 1869, by the present text of the book is no less good than are the draw-
titular head of the arts in England. Therein we ings by Mr. Maurice Greiffenhagen which illustrate
find the objects which provoked most bitter it, and some of them being at his highest level,
criticism were railway bridges and other engineer- further praise is needless. Yet in days when the
ing works, stucco-covered houses (with a passing lighter verses in French forms, which Mr. Austin
word of approval for the Queen Anne style then Dobson, Mr. Andrew Lang, and others once
not revived), the "elegant" furniture of contem- fashioned so deftly, are replaced by vague rhythms
porary drawing-rooms, coal scuttles with painted and straggling rhapsodies, one is glad to find " de-
flowers by way of adornment, inartistic silver-ware corative poetry " still winning new recruits, and to
which displayed "hideous solidity" as its one claim welcome Mr. Egan Mew for his first collection of
to notice, and realistic as opposed to " flat " orna- pleasant trifles, already familiar since their first
ment in surface decoration. Thirty years have done appearance in various periodicals,
much to improve most of these particular things ; Modern Painters. By John Ruskin. Vols. I. & EL
except for silver-ware the strictures are out of date. (London : George Allen.)—This new edition, in
But the principles Sir Edward maintained then small form, of an epoch-making work so far as the art
are true as ever, and his exaltation of Michel of Great Britain is concerned, offers an opportunity
Angelo above Raphael, which then needed some for a re-appreciation of a classic. Despite all its
courage, has become a commonplace. In the exaggeration, its wilfulness, its constant tendency to