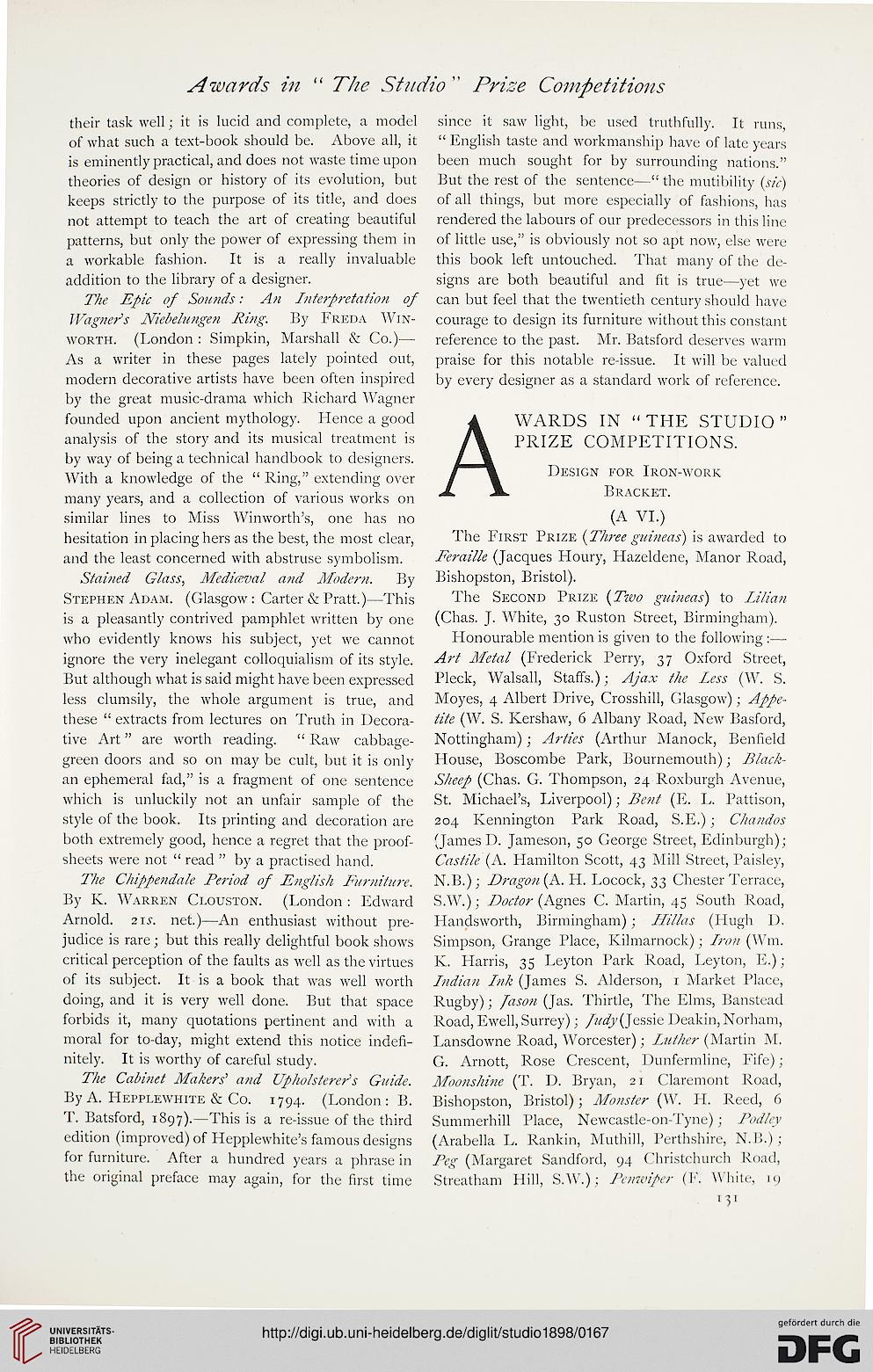 their task well; it is lucid and complete, a model
of what such a text-book should be. Above all, it
is eminently practical, and does not waste time upon
theories of design or history of its evolution, but
keeps strictly to the purpose of its title, and does
not attempt to teach the art of creating beautiful
patterns, but only the power of expressing them in
a workable fashion. It is a really invaluable
addition to the library of a designer.

The Epic of Sou?ids: An Interpretation of
IVagner's Niebelungen Ring. By Freda Win-
worth. (London : Simpkin, Marshall & Co.)—
As a writer in these pages lately pointed out,
modern decorative artists have been often inspired
by the great music-drama which Richard Wagner
founded upon ancient mythology. Hence a good
analysis of the story and its musical treatment is
by way of being a technical handbook to designers.
With a knowledge of the " Ring," extending over
many years, and a collection of various works on
similar lines to Miss Winworth's, one has no
hesitation in placing hers as the best, the most clear,
and the least concerned with abstruse symbolism.

Stained Glass, Mediaeval and Modern. By
Stephen Adam. (Glasgow : Carter & Pratt.)—This
is a pleasantly contrived pamphlet written by one
who evidently knows his subject, yet we cannot
ignore the very inelegant colloquialism of its style.
But although what is said might have been expressed
less clumsily, the whole argument is true, and
these " extracts from lectures on Truth in Decora-
tive Art" are worth reading. " Raw cabbage-
green doors and so on may be cult, but it is only
an ephemeral fad," is a fragment of one sentence
which is unluckily not an unfair sample of the
style of the book. Its printing and decoration are
both extremely good, hence a regret that the proof-
sheets were not " read " by a practised hand.

The Chippendale Period of English Furniture.
By K. Warren Clouston. (London : Ldward
Arnold. 2\s. net.)—An enthusiast without pre-
judice is rare; but this really delightful book shows
critical perception of the faults as well as the virtues
of its subject. It is a book that was well worth
doing, and it is very well done. But that space
forbids it, many quotations pertinent and with a
moral for to-day, might extend this notice indefi-
nitely. It is worthy of careful study.

The Cabinet Makers' and Upholsterer's Guide.
By A. Hepplewhite & Co. 1794. (London : B.
T. Batsford, 1897).—This is a re-issue of the third
edition (improved) of Hepplewhite's famous designs
for furniture. After a hundred years a phrase in
the original preface may again, for the first time

since it saw light, be used truthfully. It runs,
" English taste and workmanship have of late years
been much sought for by surrounding nations."
But the rest of the sentence—" the mutibility (sic)
of all things, but more especially of fashions, has
rendered the labours of our predecessors in this line
of little use," is obviously not so apt now, else were
this book left untouched. That many of the de-
signs are both beautiful and fit is true—yet we
can but feel that the twentieth century should have
courage to design its furniture without this constant
reference to the past. Mr. Batsford deserves warm
praise for this notable re-issue. It will be valued
by every designer as a standard work of reference.

AWARDS IN "THE STUDIO"
PRIZE COMPETITIONS.
Design for Iron-work
Bracket.