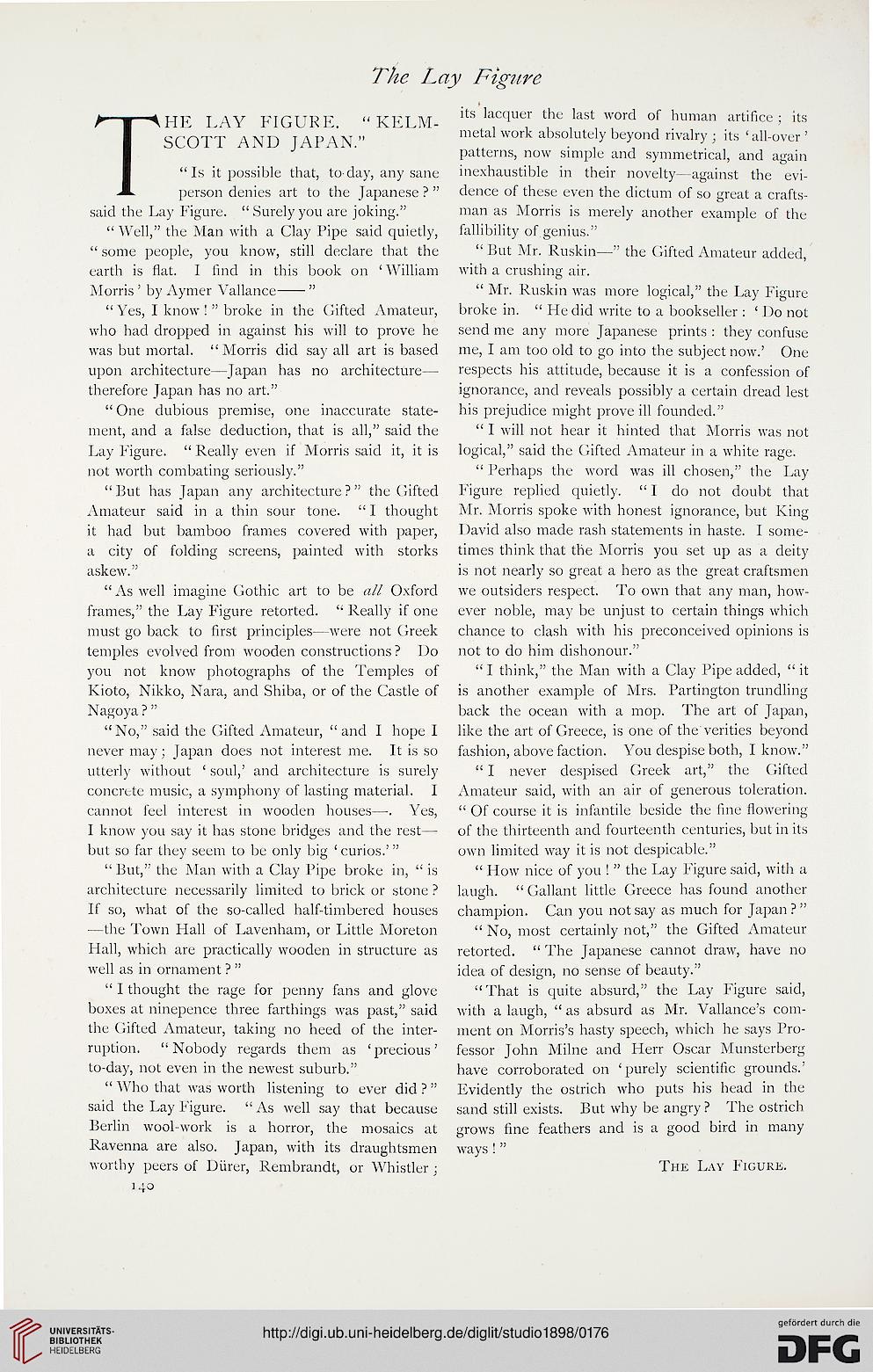 THE LAY FIGURE. " KELM-
SCOTT AND JAPAN."
"Is it possible that, today, any sane
person denies art to the Japanese ? "
said the Lay Figure. " Surely you are joking."

" Well," the Man with a Clay Pipe said quietly,
" some people, you know, still declare that the
earth is flat. I find in this book on ' William

" One dubious premise, one inaccurate state-
ment, and a false deduction, that is all," said the
Lay Figure. " Really even if Morris said it, it is
not worth combating seriously."

"But has Japan any architecture?" the Gifted
Amateur said in a thin sour tone. " I thought
it had but bamboo frames covered with paper,
a city of folding screens, painted with storks
askew."

"As well imagine Gothic art to be all Oxford
frames," the Lay Figure retorted. " Really if one
must go back to first principles—were not Greek
temples evolved from wooden constructions ? Do
you not know photographs of the Temples of
Kioto, Nikko, Nara, and Shiba, or of the Castle of
Nagoya ? "

"No," said the Gifted Amateur, "and I hope I
never may ; Japan does not interest me. It is so
utterly without ' soul,' and architecture is surely
concrete music, a symphony of lasting material. I
cannot feel interest in wooden houses—. Yes,
I know you say it has stone bridges and the rest—
but so far they seem to be only big 'curios.' "

" But," the Man with a Clay Pipe broke in, " is
architecture necessarily limited to brick or stone ?
If so, what of the so-called half-timbered houses
-the Town Hall of Lavenham, or Little Moreton
Hall, which are practically wooden in structure as
well as in ornament ? "

" I thought the rage for penny fans and glove
boxes at ninepence three farthings was past," said
the Gifted Amateur, taking no heed of the inter-
ruption. "Nobody regards them as 'precious'
to-day, not even in the newest suburb."

" Who that was worth listening to ever did ? "
said the Lay Figure. " As well say that because
Berlin wool-work is a horror, the mosaics at
Ravenna are also. Japan, with its draughtsmen
worthy peers of Durer, Rembrandt, or Whistler ;
140

its lacquer the last word of human artifice ; its
metal work absolutely beyond rivalry ; its 'all-over '
patterns, now simple and symmetrical, and again
inexhaustible in their novelty—against the evi-
dence of these even the dictum of so great a crafts-
man as Morris is merely another example of the
fallibility of genius."

" But Mr. Ruskin—" the Gifted Amateur added,
with a crushing air.

" Mr. Ruskin was more logical," the Lay Figure
broke in. " He did write to a bookseller : ' Do not
send me any more Japanese prints : they confuse
me, I am too old to go into the subject now.' One
respects his attitude, because it is a confession of
ignorance, and reveals possibly a certain dread lest
his prejudice might prove ill founded."

" I will not hear it hinted that Morris was not
logical," said the Gifted Amateur in a white rage.

" Perhaps the word was ill chosen," the Lay
Figure replied quietly. " I do not doubt that
Mr. Morris spoke with honest ignorance, but King
David also made rash statements in haste. I some-
times think that the Morris you set up as a deity
is not nearly so great a hero as the great craftsmen
we outsiders respect. To own that any man, how-
ever noble, may be unjust to certain things which
chance to clash with his preconceived opinions is
not to do him dishonour."

" I think," the Man with a Clay Pipe added, " it
is another example of Mrs. Partington trundling
back the ocean with a mop. The art of Japan,
like the art of Greece, is one of the verities beyond
fashion, above faction. You despise both, I know."

" I never despised Greek art," the Gifted
Amateur said, with an air of generous toleration.
" Of course it is infantile beside the line flowering
of the thirteenth and fourteenth centuries, but in its
own limited way it is not despicable."

" How nice of you ! " the Lay Figure said, with a
laugh. " Gallant little Greece has found another
champion. Can you not say as much for Japan ? "

" No, most certainly not," the Gifted Amateur
retorted. " The Japanese cannot draw, have no
idea of design, no sense of beauty."

"That is quite absurd," the Lay Figure said,
with a laugh, " as absurd as Mr. Vallance's com-
ment on Morris's hasty speech, which he says Pro-
fessor John Milne and Herr Oscar Munsterberg
have corroborated on 'purely scientific grounds.'
Evidently the ostrich who puts his head in the
sand still exists. But why be angry ? The ostrich
grows fine feathers and is a good bird in many
ways ! "