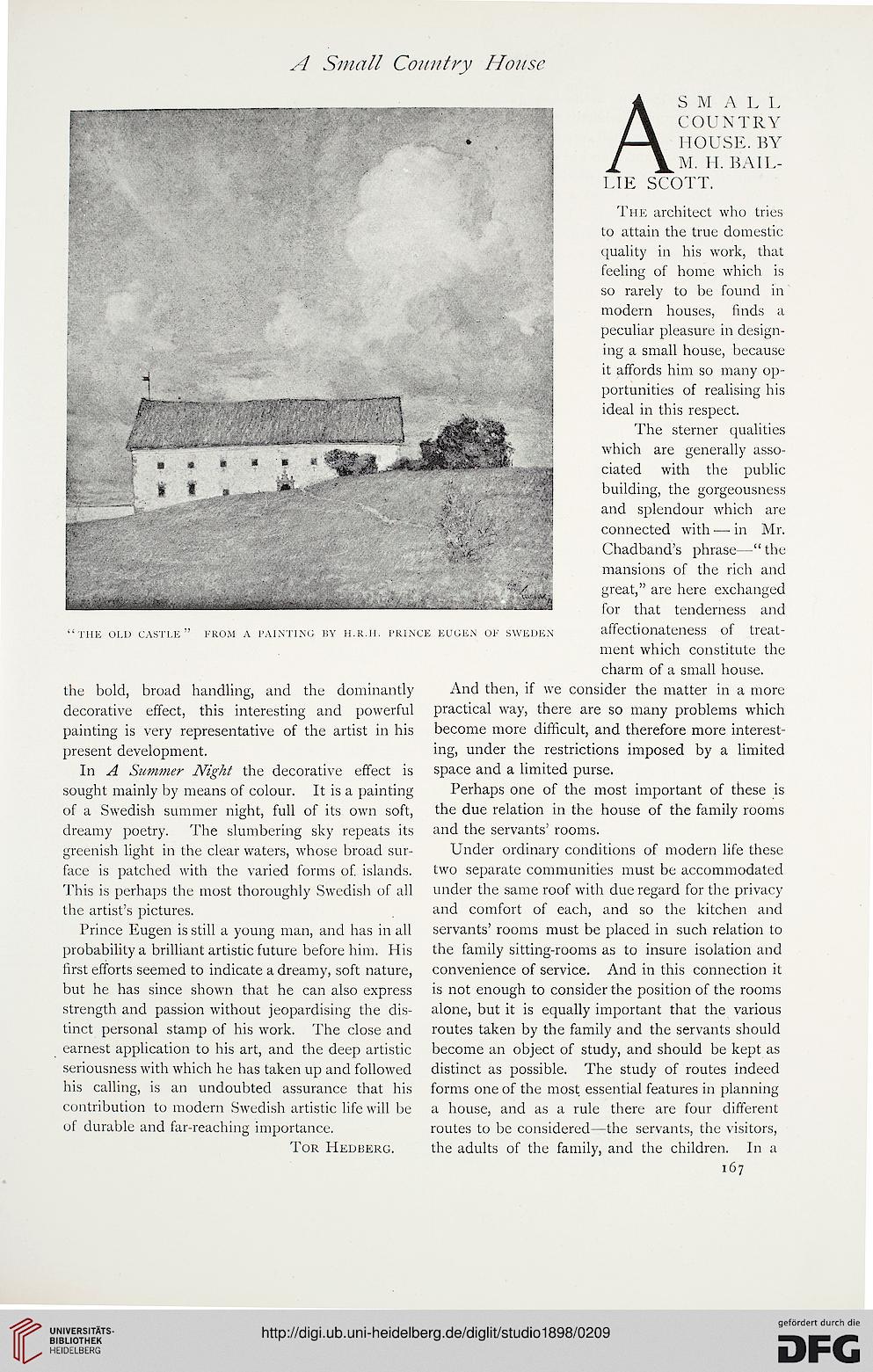 The architect who tries
to attain the true domestic
quality in his work, that
feeling of home which is
so rarely to be found in
modern houses, finds a
peculiar pleasure in design-
ing a small house, because
it affords him so many op-
portunities of realising his
ideal in this respect.

The sterner qualities
which are generally asso-
ciated with the public
building, the gorgeousness
and splendour which are
connected with — in Mr.
Chadband's phrase—" the
mansions of the rich and
great," are here exchanged
for that tenderness and

"the old castle" from a painting by h.r.h. prince eugen of Sweden affect]onateness of treat-
ment which constitute the
charm of a small house.

the bold, broad handling, and the dominantly And then, if we consider the matter in a more
decorative effect, this interesting and powerful practical way, there are so many problems which
painting is very representative of the artist in his become more difficult, and therefore more interest-
present development. ing, under the restrictions imposed by a limited

In A Summer Night the decorative effect is space and a limited purse,

sought mainly by means of colour. It is a painting Perhaps one of the most important of these is

of a Swedish summer night, full of its own soft, the due relation in the house of the family rooms

dreamy poetry. The slumbering sky repeats its and the servants' rooms.

greenish light in the clear waters, whose broad sur- Under ordinary conditions of modern life these

face is patched with the varied forms of. islands. two separate communities must be accommodated

the artist's pictures. and comfort of each, and so the kitchen and

Prince Eugen is still a young man, and has in all servants' rooms must be placed in such relation to

probability a brilliant artistic future before him. His the family sitting-rooms as to insure isolation and

first efforts seemed to indicate a dreamy, soft nature, convenience of service. And in this connection it

strength and passion without jeopardising the dis- alone, but it is equally important that the various

tinct personal stamp of his work. The close and routes taken by the family and the servants should

earnest application to his art, and the deep artistic become an object of study, and should be kept as

seriousness with which he has taken up and followed distinct as possible. The study of routes indeed

his calling, is an undoubted assurance that his forms one of the most essential features in planning

contribution to modern Swedish artistic life will be a house, and as a rule there are four different

of durable and far-reaching importance. routes to be considered—the servants, the visitors,

Tor Hedberg. the adults of the family, and the children. In a