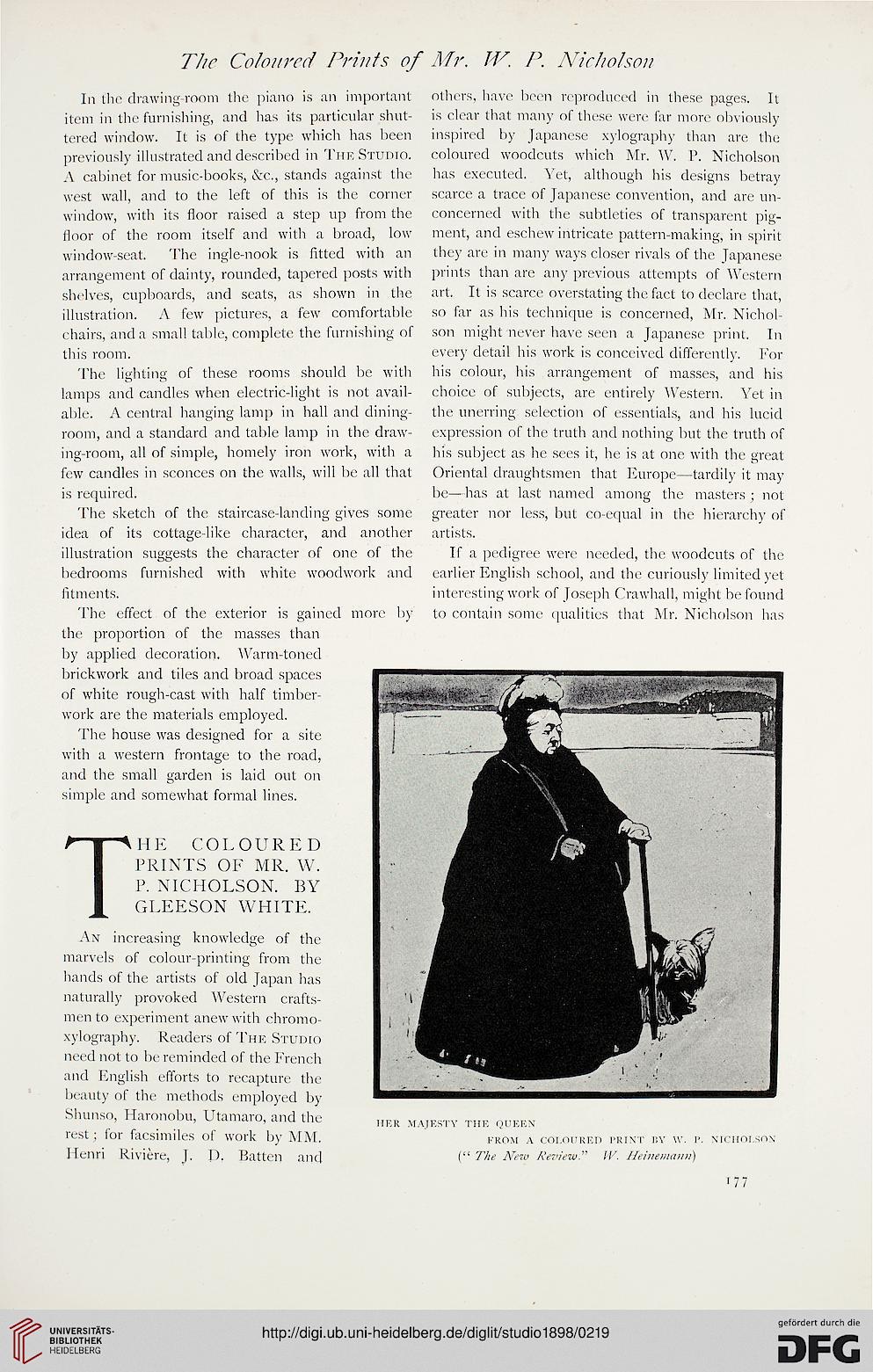 In the drawing room the piano is an important others, have been reproduced in these pages. It
item in the furnishing, and has its particular shut- is clear that many of these were far more obviously
tercd window. It is of the type which has been inspired by Japanese xylography than are the
previously illustrated and described in The Studio, coloured woodcuts which Mr. W. P. Nicholson
A cabinet for music-books, &c, stands against the has executed. Yet, although his designs betray
west wall, and to the left of this is the corner scarce a trace of Japanese convention, and are un-
window, with its floor raised a step up from the concerned with the subtleties of transparent pig-
floor of the room itself and with a broad, low ment, and eschew intricate pattern-making, in spirit
window-seat. The ingle-nook is fitted with an they are in many ways closer rivals of the Japanese
arrangement of dainty, rounded, tapered posts with prints than are any previous attempts of Western
shelves, cupboards, and scats, as shown in the art. It is scarce overstating the fact to declare that,
illustration. A few pictures, a few comfortable so far as his technique is concerned, Mr. Nichol-
chairs, and a small table, complete the furnishing of son might never have seen a Japanese print. In
this room. every detail his work is conceived differently. For

The lighting of these rooms should be with his colour, his arrangement of masses, and his

lamps and candles when electric-light is not avail- choice of subjects, are entirely Western. Yet in

able. A central hanging lamp in hall and dining- the1 unerring selection of essentials, and his lucid

room, and a standard and table lamp in the draw- expression of the truth and nothing but the truth of

ing-room, all of simple, homely iron work, with a his subject as he sees it, he is at one with the great

few candles in sconces on the walls, will be all that Oriental draughtsmen that Europe—tardily it may

is required. be—has at last named among the masters ; not

The sketch of the staircase-landing gives some greater nor less, but co-equal in the hierarchy of

idea of its cottage-like character, and another artists.

illustration suggests the character of one of the Tf a pedigree were needed, the woodcuts of the

bedrooms furnished with white woodwork and earlier English school, and the curiously limited yet

fitments. interesting work of Joseph Crawhall, might be found

The effect of the exterior is gained more by to contain some qualities that Mr. Nicholson has
the proportion of the masses than
by applied decoration. Warm-toned
brickwork and tiles and broad spaces
of white rough-cast with half timber-
work are the materials employed.

The house was designed for a site
with a western frontage to the road,
and the small garden is laid out on
simple and somewhat formal lines.

An increasing knowledge of the
marvels of colour-printing from the
hands of the artists of old Japan has
naturally provoked Western crafts-
men to experiment anew with chromo-
xylography. Readers of The Studio
need not to be reminded of the French
and English efforts to recapture the
beauty of the methods employed by
Shunso, Haronobu, Utamaro, and the her majesty the queen

rest; for facsimiles of work by MM. from a coloured print by w. p. Nicholson