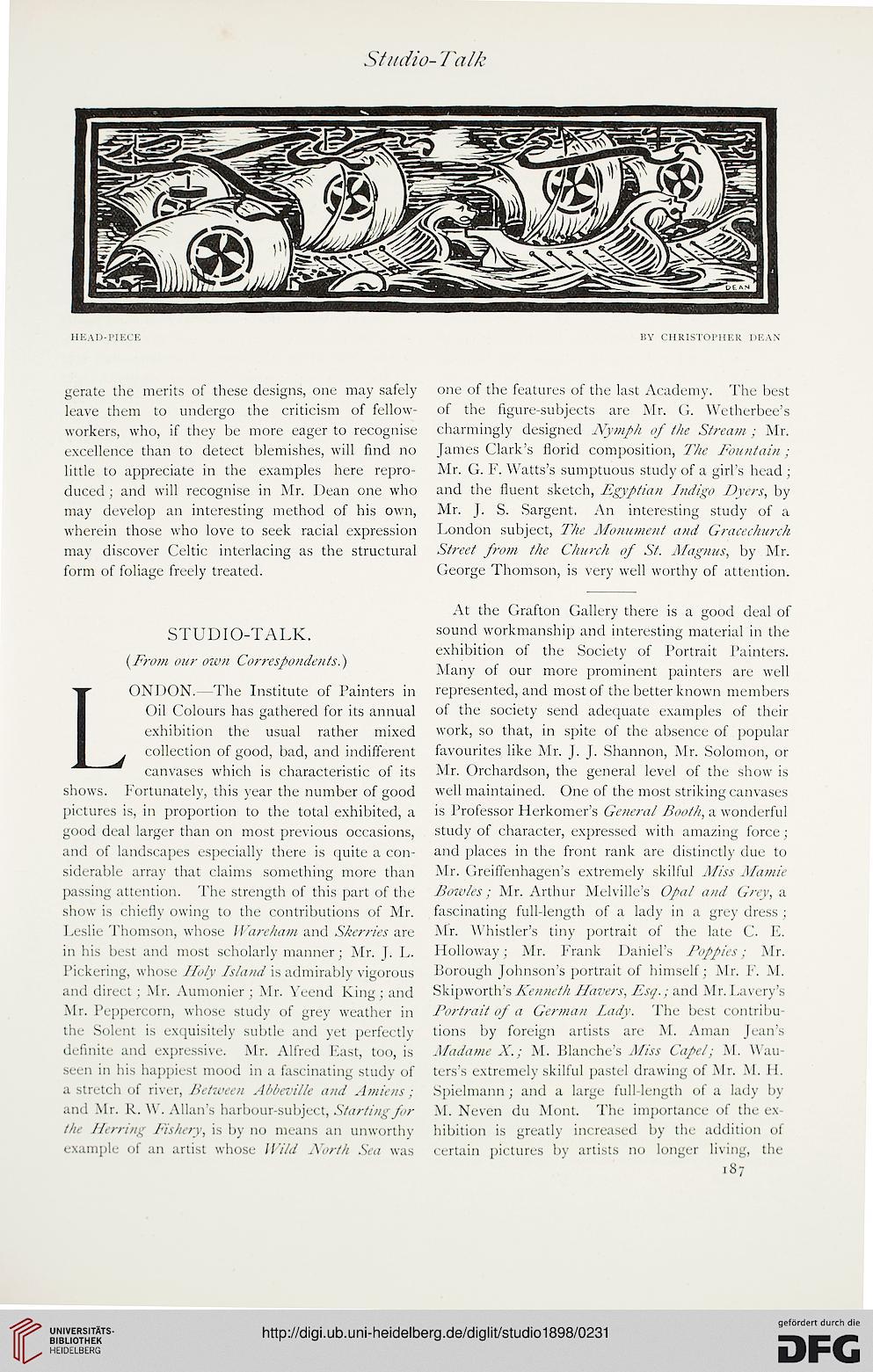 geratc the merits of these designs, one may safely
leave them to undergo the criticism of fellow-
workers, who, if they be more eager to recognise
excellence than to detect blemishes, will find no
little to appreciate in the examples here repro-
duced ; and will recognise in Mr. Dean one who
may develop an interesting method of his own,
wherein those who love to seek racial expression
may discover Celtic interlacing as the structural
form of foliage freely treated.

LONDON.-The Institute of Painters in
Oil Oolours has gathered for its annual
exhibition the usual rather mixed
collection of good, bad, and indifferent
canvases which is characteristic of its
shows. Fortunately, this year the number of good
pictures is, in proportion to the total exhibited, a
good deal larger than on most previous occasions,
and of landscapes especially there is quite a con-
siderable array that claims something more than
passing attention. The strength of this part of the
show is chiefly owing to the contributions of Mr.
Leslie Thomson, whose Wareham and Skerries are
in his best and most scholarly manner; Mr. }. L.
Pickering, whose Holy Island is admirably vigorous
and direct : Mr. Aumonier : Mr. Yeend King : and
Mr. Peppercorn, whose study of grey weather in
the Solent is exquisitely subtle and yet perfectly
definite and expressive. Mr. Alfred East, too, is
seen in his happiest mood in a fascinating study of
a stretch of river, Between Abbeville and Amiens ;
and Mr. R. W. Allan's harbour-subject, Starting for
the Herring Fishery, is by no means an unworthy
example Of an artist whose Wild North Sea was

one of the features of the last Academy. The best
of the figure-subjects are Mr. G. Wetherbee's
charmingly designed Nymph of the Stream : Mr.
James Clark's florid composition, The Fountain :
Mr. G. F. Watts's sumptuous study of a girl's head ;
and the fluent sketch, Egyptian Indigo Dyers, by
Mr. J. S. Sargent. An interesting study of a
London subject, The Monument and Gracechurch
Street from the Church of St. Magnus, by Mr.
George Thomson, is very well worthy of attention.

At the Grafton Gallery there is a good deal of
sound workmanship and interesting material in the
exhibition of the Society of Portrait Painters.
Many of our more prominent painters are well
represented, and most of the better known members
of the society send adequate examples of their
work, so that, in spite of the absence of popular
favourites like Mr. J. J. Shannon, Mr. Solomon, or
Mr. Orchardson, the general level of the show is
well maintained. One of the most striking canvases
is Professor Herkomer's General Booth, a wonderful
study of character, expressed with amazing force :
and places in the front rank are distinctly due to
Mr. GreifTenhagen's extremely skilful Miss Mamie
Bowles; Mr. Arthur Melville's Opal and Greyt a
fascinating full-length of a lady in a grey dress ;
Mr. Whistler's tiny portrait of the late C E.
Holloway ; Mr. I-'rank Daniel's Poppies; Mr.
Porough Johnson's portrait of himself j Mr. V. M.
Skipworth's Kenneth //avers, Es</.; and Mr. 1 .avery's
Portrait of a German /.adv. The best contribu-
tions by foreign artists are M. A man ban's
Madame X.; M. Blanche's Miss Capel; M. Wau-
ters's extremely skilful pastel drawing of Mr. M. II.
Spielmann; and a large full-length of a lady by
M. Neven du Mont. The importance of the e\
hibition is greatly increased by the addition ot

certain pictures by artists no longer living, the