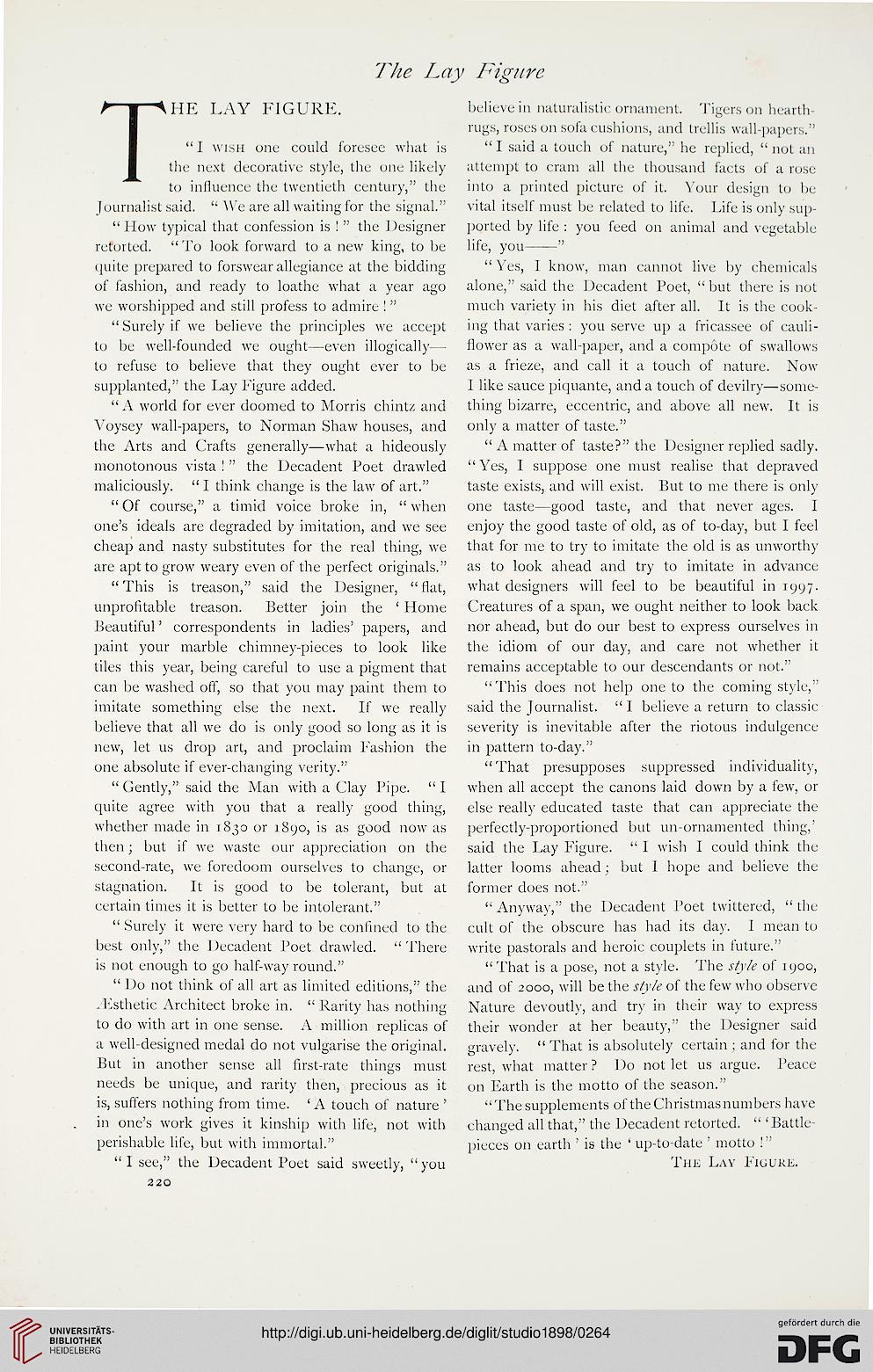 the next decorative style, the one likely attempt to cram all the thousand facts of a rose

to influence the twentieth century," the into a printed picture of it. Your design to he

Journalist said. " We are all waiting for the signal." vital itself must be related to life. Life is only sup-

" How typical that confession is ! " the Designer ported by life : you feed on animal and vegetable

retorted. "To look forward to a new king, to be life, you——"

quite prepared to forswear allegiance at the bidding "Yes, I know, man cannot live by chemicals

of fashion, and ready to loathe what a year ago alone," said the Decadent Poet, "but there is not

we worshipped and still profess to admire ! " much variety in his diet after all. It is the cook-

"Surely if we believe the principles we accept ing that varies : you serve up a fricassee of cauli-

to be well-founded we ought—even illogically— flower as a wall-paper, and a compote of swallows

to refuse to believe that they ought ever to be as a frieze, and call it a touch of nature. Now

supplanted," the Lay Figure added. I like sauce piquante, and a touch of devilry—some-

"A world for ever doomed to Morris chintz and thing bizarre, eccentric, and above all new. It is

Yoysey wall-papers, to Norman Shaw houses, and only a matter of taste."

the Arts and Crafts generally—what a hideously " A matter of taste?" the Designer replied sadly,

monotonous vista!" the Decadent Poet drawled "Yes, I suppose one must realise that depraved

maliciously. " I think change is the law of art." taste exists, and will exist. But to me there is only

" Of course," a timid voice broke in, " when one taste—good taste, and that never ages. I

one's ideals are degraded by imitation, and we see enjoy the good taste of old, as of to-day, but I feel

cheap and nasty substitutes for the real thing, we that for me to try to imitate the old is as unworthy

are apt to grow weary even of the perfect originals." as to look ahead and try to imitate in advance

"This is treason," said the Designer, "flat, what designers will feel to be beautiful in 1997.

unprofitable treason. Better join the ' Home Creatures of a span, we ought neither to look back

Beautiful' correspondents in ladies' papers, and nor ahead, but do our best to express ourselves in

paint your marble chimney-pieces to look like the idiom of our day, and care not whether it

tiles this year, being careful to use a pigment that remains acceptable to our descendants or not."

can be washed off, so that you may paint them to "This does not help one to the coming style,"

imitate something else the next. If we really said the Journalist. "I believe a return to classic

new, let us drop art, and proclaim Fashion the in pattern to-day."

one absolute if ever-changing verity." "That presupposes suppressed individuality,

" Gently," said the Man with a Clay Pipe. " I when all accept the canons laid down by a few, or

quite agree with you that a really good thing, else really educated taste that can appreciate the

whether made in 1830 or 1890, is as good now as perfectly-proportioned but un-ornamented thing,'

then ; but if we waste our appreciation on the said the Lay Figure. " I wish I could think the

second-rate, we foredoom ourselves to change, or latter looms ahead; but I hope and believe the

stagnation. It is good to be tolerant, but at former does not."

certain times it is better to be intolerant." " Anyway," the Decadent Poet twittered, " the

" Surely it were very hard to be confined to the cult of the obscure has had its day. I mean to

best only," the Decadent Poet drawled. "There write pastorals and heroic couplets in future."

" Do not think of all art as limited editions," the and of 2000, will be the style of the few who observe

/Esthetic Architect broke in. " Rarity has nothing Nature devoutly, and try in their way to express

to do with art in one sense. A million replicas of their wonder at her beauty,"' the Designer said

a well-designed medal do not vulgarise the original. gravely. " That is absolutely certain ; and for the

But in another sense all first-rate things must rest, what matter? Do not let us argue. Peace

needs be unique, and rarity then, precious as it on Earth is the motto of the season."

is, suffers nothing from time. 'A touch of nature 7 "The supplements of the Christmas numbers have

in one's work gives it kinship with life, not with changed all that," the Decadent retorted. "'Battle

perishable life, but with immortal." pieces on earth ' is the ' up-to-date ' motto !"