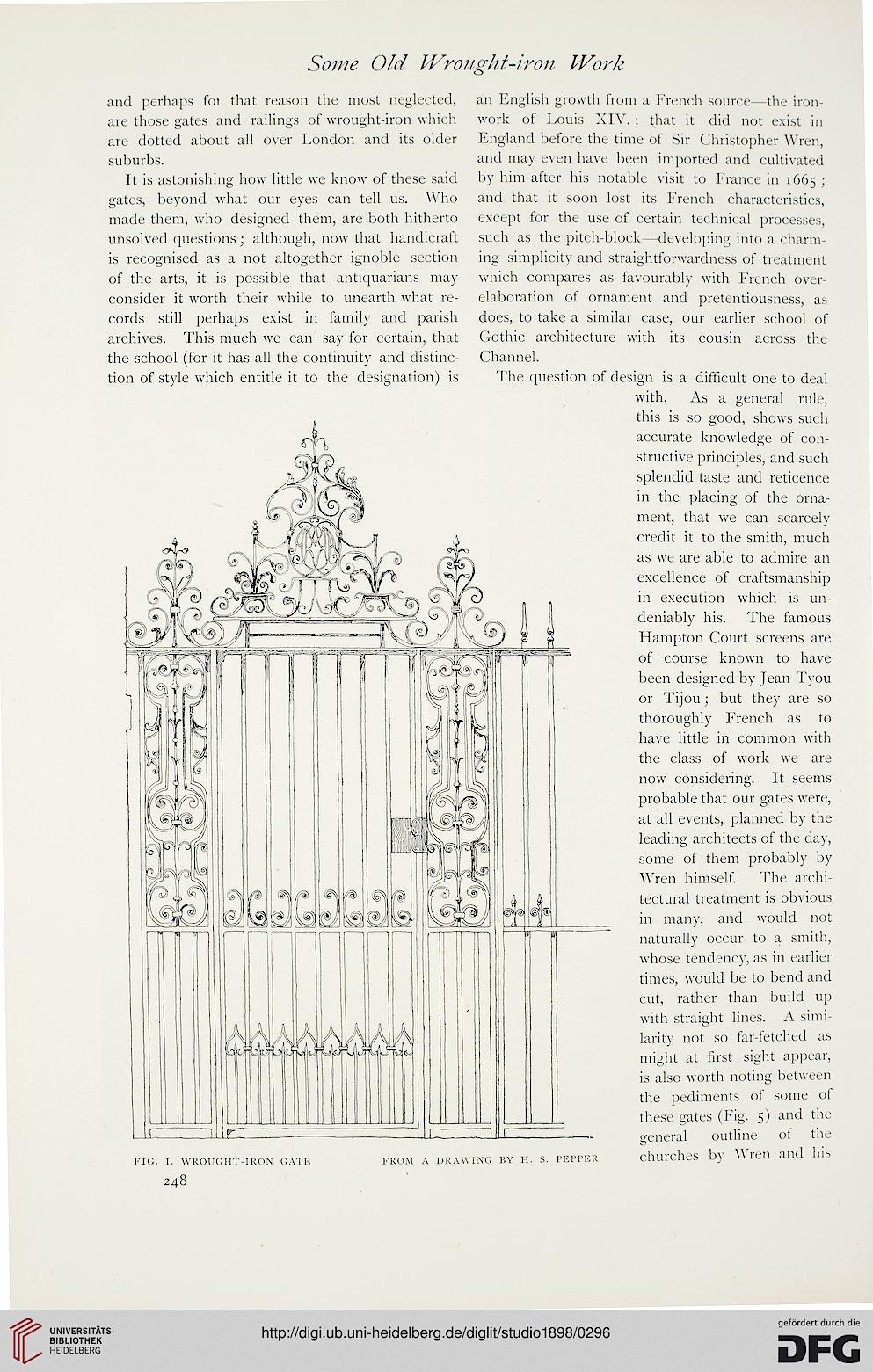 and perhaps foi that reason the most neglected, an English growth from a French source the iron
are those gates and railings of wrought-iron which work of Louis XIV.; that it did not exist

are dotted about all over London and its older England before the time of Sir Christopher Wren,
suburbs. and may even have been imported and cultivated

It is astonishing how little we know of these said by him alter his notable visit to Franee in 1665 ;
gates, beyond what our eyes can tell us. Who and that it soon lost its French characteristics,
made them, who designed them, are both hitherto except for the use of certain technical processes,
unsolved questions; although, now that handicraft such as the pitch-block—developing into a charm-
is recognised as a not altogether ignoble section ing simplicity and straightforwardness of treatment
of the arts, it is possible that antiquarians ma)- which compares as favourably with French over-
consider it worth their while to unearth what re- elaboration of ornament and pretentiousness, as
cords still perhaps exist in family and parish does, to take a similar case, our earlier school of
archives. This much we can say for certain, that Gothic architecture with its cousin across the
the school (for it has all the continuity and distinc- Channel.

with. As a general rule,
this is so good, shows such
accurate knowledge of con-
structive principles, and such
splendid taste and reticence
in the placing of the orna-
ment, that we can scarcely
credit it to the smith, much
as we are able to admire an
excellence of craftsmanship
in execution which is un-
deniably his. The famous
Hampton Court screens are
of course known to have
been designed by Jean Tyou
or Tijou; but they are so
thoroughly French as to
have little in common with
the class of work we are
now considering. It seems
probable that our gates were,
at all events, planned by the
leading architects of the day,
some of them probably by
Wren himself. The archi-
tectural treatment is obvious
in many, and would not
naturally occur to a smith,
whose tendency, as in earlier
times, would be to bend and
cut, rather than build up
with straight lines. A simi-
larity not so far-fetched as
might at first sight appear,
is also worth noting between
the pediments of some of
these gates (Fig. 5) and the
general outline of the

FIG. I. WROUGHT-IRON GATE FROM A DRAWING BY H. S. PEPPER churches by WlQli and his