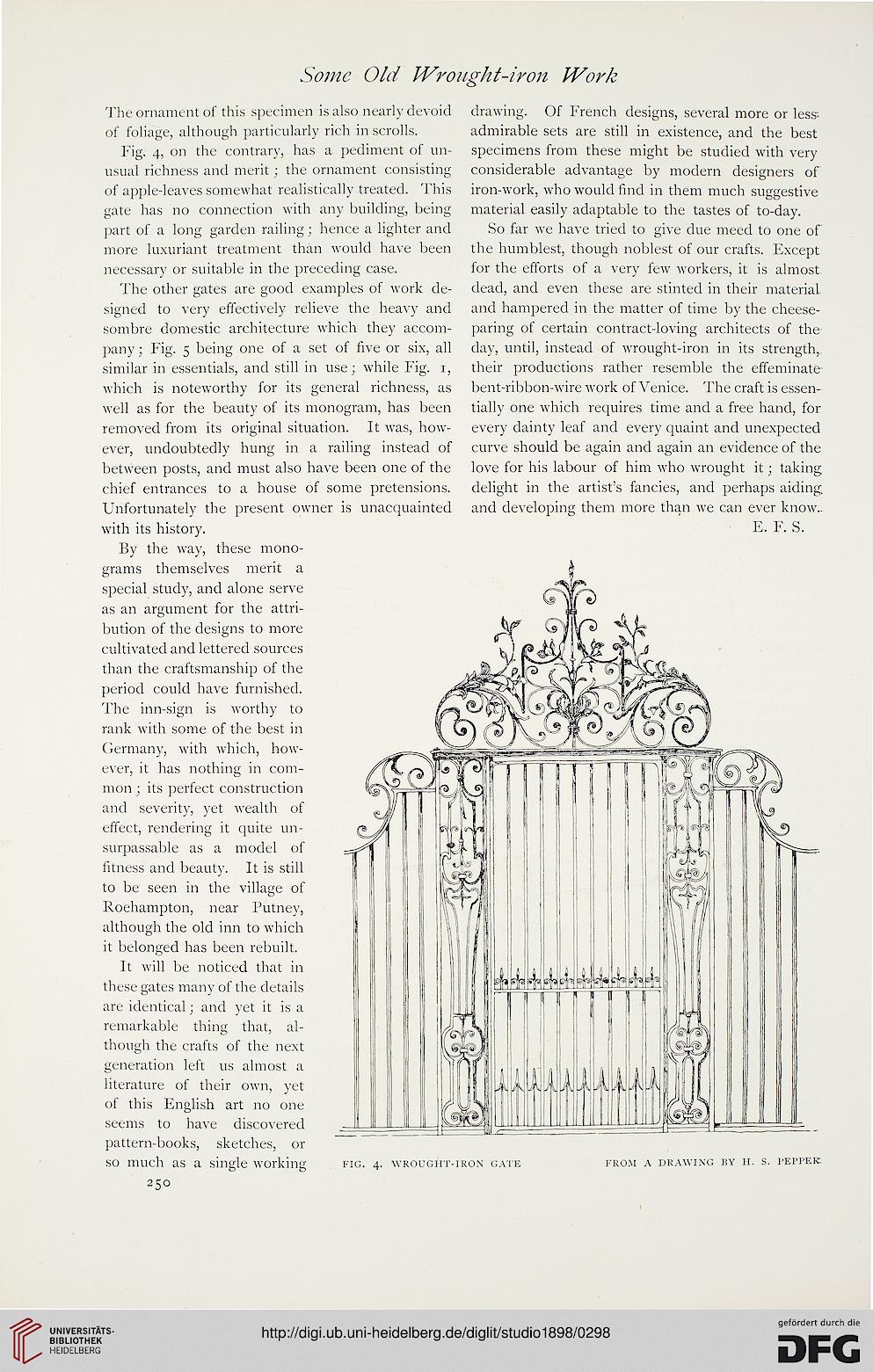 The ornament of this specimen is also nearly devoid drawing. Of French designs, several more or less--
of foliage, although particularly rich in scrolls. admirable sets are still in existence, and the best

Fig. 4, on the contrary, has a pediment of un- specimens from these might be studied with very
usual richness and merit ; the ornament consisting considerable advantage by modern designers of
of apple-leaves somewhat realistically treated. This iron-work, who would find in them much suggestive
gate has no connection with any building, being material easily adaptable to the tastes of to-day.
part of a long garden railing; hence a lighter and So far we have tried to give due meed to one of
more luxuriant treatment than would have been the humblest, though noblest of our crafts. Except
necessary or suitable in the preceding case. for the efforts of a very few workers, it is almost

The other gates are good examples of work de- dead, and even these are stinted in their material
signed to very effectively relieve the heavy and and hampered in the matter of time by the cheese-
sombre domestic architecture which they accom- paring of certain contract-loving architects of the
pany; Fig. 5 being one of a set of five or six, all day, until, instead of wrought-iron in its strength,
similar in essentials, and still in use; while Fig. 1, their productions rather resemble the effeminate
which is noteworthy for its general richness, as bent-ribbon-wire work of Venice. The craft is essen-
well as for the beauty of its monogram, has been tially one which requires time and a free hand, for
removed from its original situation. It was, how- every dainty leaf and every quaint and unexpected
ever, undoubtedly hung in a railing instead of curve should be again and again an evidence of the
between posts, and must also have been one of the love for his labour of him who wrought it; taking
chief entrances to a house of some pretensions. delight in the artist's fancies, and perhaps aiding.
Unfortunately the present owner is unacquainted and developing them more than we can ever know..
with its history. E. F. S.

By the way, these mono-
grams themselves merit a
special study, and alone serve
as an argument for the attri-
bution of the designs to more
cultivated and lettered sources
than the craftsmanship of the
period could have furnished.
The inn-sign is worthy to
rank with some of the best in
Germany, Avith which, how-
ever, it has nothing in com-
mon ; its perfect construction
and severity, yet wealth of
effect, rendering it quite un-
surpassable as a model of
fitness and beauty. It is still
to be seen in the village of
Roehampton, near Putney,
although the old inn to which
it belonged has been rebuilt.

It will be noticed that in
these gates many of the details
are identical; and yet it is a
remarkable thing that, al-
though the crafts of the next
generation left us almost a
literature of their own, yet
of this English art no one
seems to have discovered
pattern-books, sketches, or
so much as a single working fig. 4. wrought-iron gate from a drawing by ii. s. pepper: