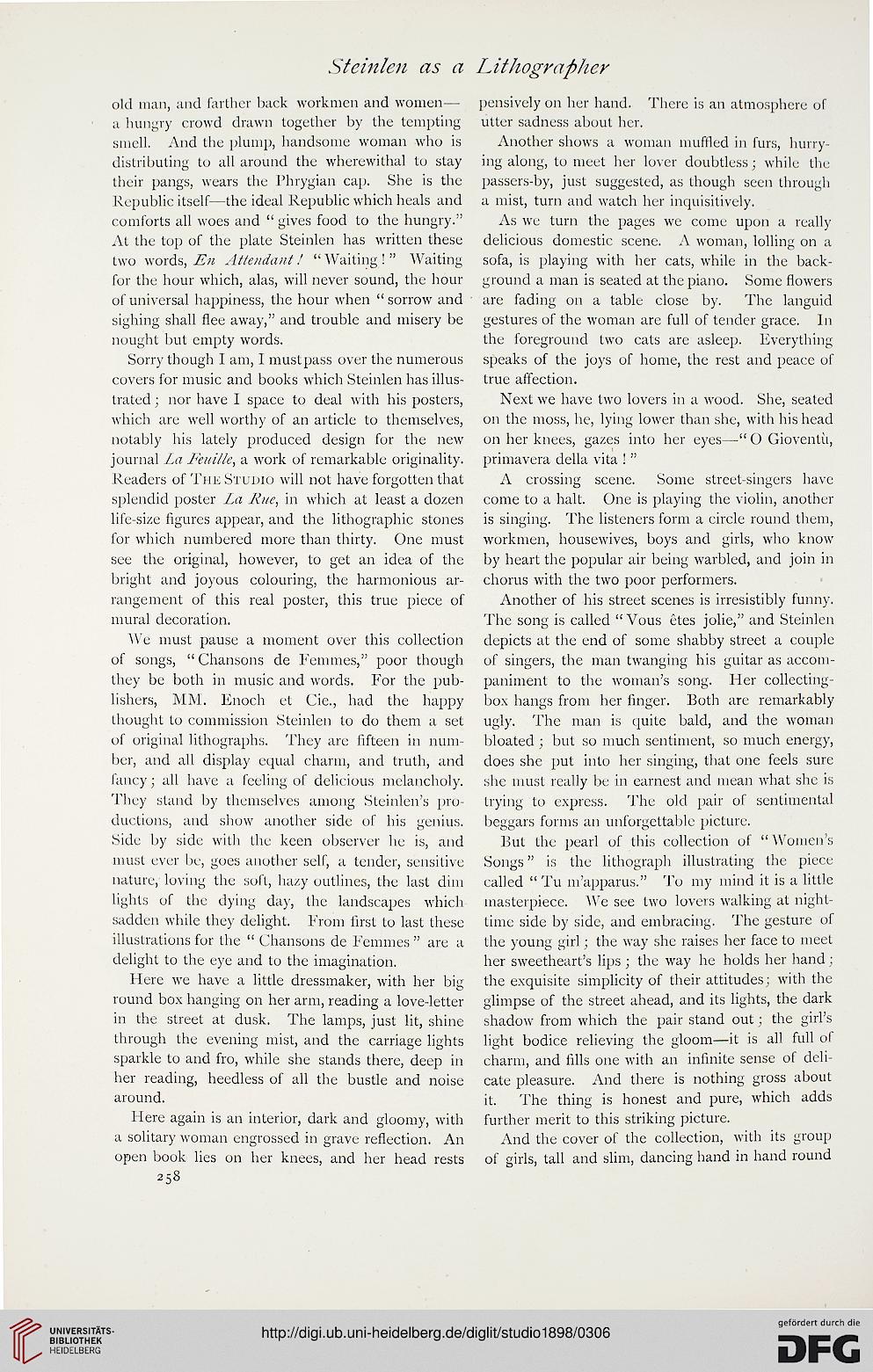 Information about OCR text
Steinlen as a Lithographer

old man, and farther hack workmen and women—
a hungry crowd drawn together by the tempting
smell. And the plump, handsome woman who is
distributing to all around the wherewithal to stay
their pangs, wears the Phrygian cap. She is the
Republic itself—the ideal Republic which heals and
comforts all woes and " gives food to the hungry."
At the top of the plate Steinlen has written these
two words, En Attendant I " Waiting ! " Waiting
for the hour which, alas, will never sound, the hour
of universal happiness, the hour when "sorrow and
sighing shall flee away," and trouble and misery be
nought but empty words.

Sorry though I am, I must pass over the numerous
covers for music and books which Steinlen has illus-
trated ; nor have I space to deal with his posters,
which are well worthy of an article to themselves,
notably his lately produced design for the new
journal La Feu ilk, a work of remarkable originality.
Readers of The Studio will not have forgotten that
splendid poster La Rue, in which at least a dozen
life-size figures appear, and the lithographic stones
for which numbered more than thirty. One must
see the original, however, to get an idea of the
bright and joyous colouring, the harmonious ar-
rangement of this real poster, this true piece of
mural decoration.

AVe must pause a moment over this collection
of songs, " Chansons de Femmes," poor though
they be both in music and words. For the pub-
lishers, MM. Enoch et Cie., had the happy
thought to commission Steinlen to do them a set
of original lithographs. They are fifteen in num-
ber, and all display equal charm, and truth, and
fancy; all have a feeling of delicious melancholy.
They stand by themselves among Steinlen's pro-
ductions, and show another side of his genius.
Side by side with the keen observer he is, and
must ever be, goes another self, a tender, sensitive
nature, loving the soft, hazy outlines, the last dim
lights of the dying day, the landscapes which
sadden while they delight. From first to last these
illustrations for the " Chansons de Femmes " are a
delight to the eye and to the imagination.

Here we have a little dressmaker, with her big
round box hanging on her arm, reading a love-letter
in the street at dusk. The lamps, just lit, shine
through the evening mist, and the carriage lights
sparkle to and fro, while she stands there, deep in
her reading, heedless of all the bustle and noise
around.

Here again is an interior, dark and gloomy, with
a solitary woman engrossed in grave reflection. An
open book lies on her knees, and her head rests
258

pensively on her hand. There is an atmosphere of
utter sadness about her.

Another shows a woman muffled in furs, hurry-
ing along, to meet her lover doubtless; while the
passers-by, just suggested, as though seen through
a mist, turn and watch her inquisitively.

As we turn the pages we come upon a really
delicious domestic scene. A woman, lolling on a
sofa, is playing with her cats, while in the back-
ground a man is seated at the piano. Some flowers
are fading on a table close by. The languid
gestures of the woman are full of tender grace. In
the foreground two cats are asleep. Everything
speaks of the joys of home, the rest and peace of
true affection.

Next we have two lovers in a wrood. She, seated
on the moss, he, lying lower than she, with his head
on her knees, gazes into her eyes—" O Gioventu,
primavera della vita ! "

A crossing scene. Some street-singers have
come to a halt. One is playing the violin, another
is singing. The listeners form a circle round them,
workmen, housewives, boys and girls, who know
by heart the popular air being warbled, and join in
chorus with the two poor performers.

Another of his street scenes is irresistibly funny.
The song is called " Vous etes jolie," and Steinlen
depicts at the end of some shabby street a couple
of singers, the man twanging his guitar as accom-
paniment to the woman's song. Her collecting-
box hangs from her finger. Both are remarkably
ugly. The man is quite bald, and the woman
bloated ; but so much sentiment, so much energy,
does she put into her singing, that one feels sure
she must really be in earnest and mean what she is
trying to express. The old pair of sentimental
beggars forms an unforgettable picture.

But the pearl of this collection of "Women's
Songs" is the lithograph illustrating the piece
called " Tu m'apparus." To my mind it is a little
masterpiece. AVe see two lovers walking at night-
time side by side, and embracing. The gesture of
the young girl; the way she raises her face to meet
her sweetheart's lips ; the way he holds her hand ;
the exquisite simplicity of their attitudes ; with the
glimpse of the street ahead, and its lights, the dark
shadow from which the pair stand out; the girl's
light bodice relieving the gloom—it is all full of
charm, and fills one with an infinite sense of deli-
cate pleasure. And there is nothing gross about
it. The thing is honest and pure, which adds
further merit to this striking picture.

And the cover of the collection, with its group
of girls, tall and slim, dancing hand in hand round