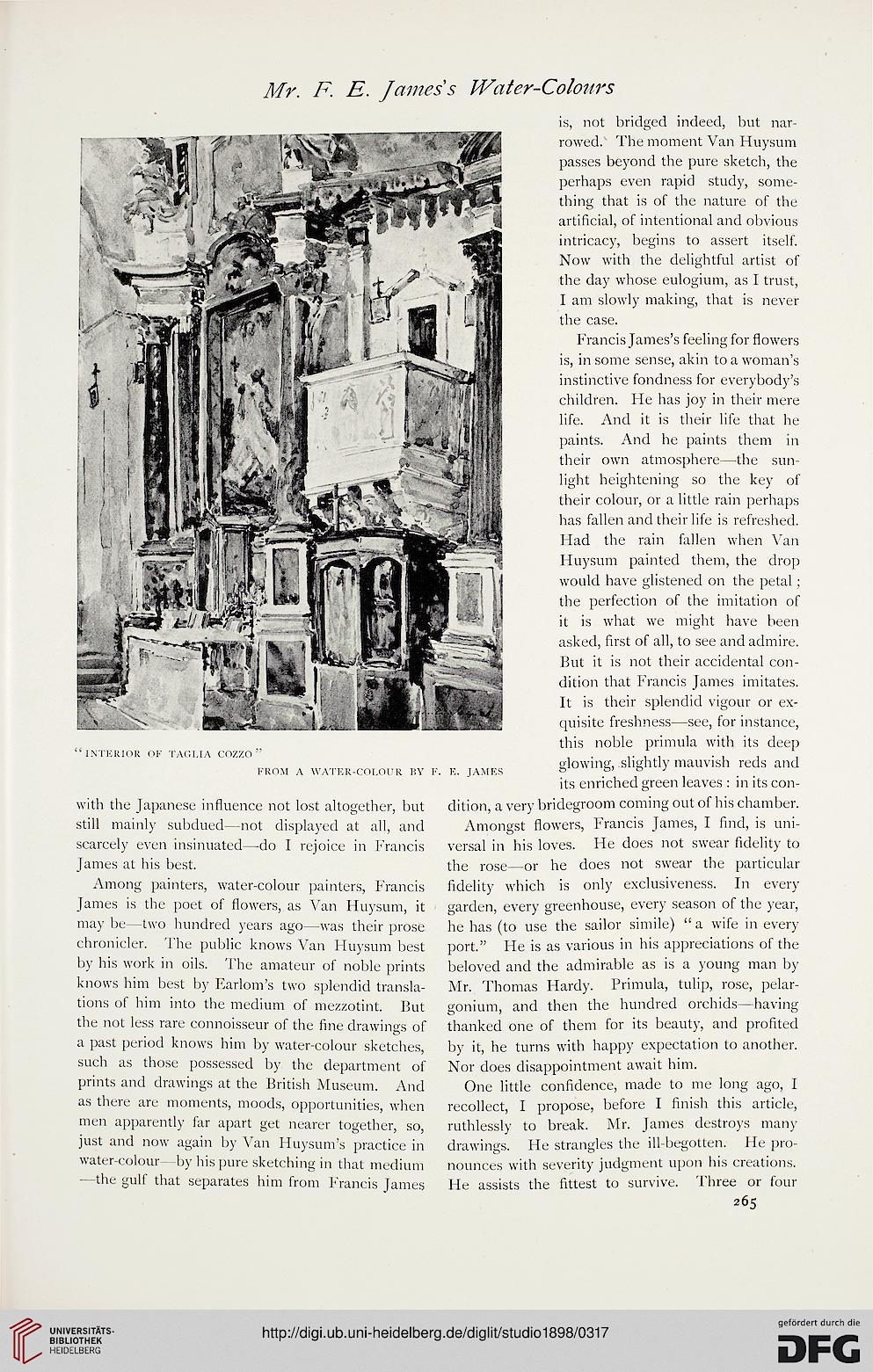 is, not bridged indeed, but nar-
rowed. The moment Van Huysum
passes beyond the pure sketch, the
perhaps even rapid study, some-
thing that is of the nature of the
artificial, of intentional and obvious
intricacy, begins to assert itself.
Now with the delightful artist of
the day whose eulogium, as I trust,
I am slowly making, that is never
the case.

Francis James's feeling for flowers
is, in some sense, akin to a woman's
instinctive fondness for everybody's
children. He has joy in their mere
life. And it is their life that he
paints. And he paints them in
their own atmosphere—the sun-
light heightening so the key of
their colour, or a little rain perhaps
has fallen and their life is refreshed.
Had the rain fallen when Van
Huysum painted them, the drop
would have glistened on the petal;
the perfection of the imitation of
it is what we might have been
asked, first of all, to see and admire.
But it is not their accidental con-
dition that Francis James imitates.
It is their splendid vigour or ex-
quisite freshness—see, for instance,
this noble primula with its deep
glowing, slightly mauvish reds and
its enriched green leaves : in its con-
with the Japanese influence not lost altogether, but dition, a very bridegroom coming out of his chamber,
still mainly subdued—not displayed at all, and Amongst flowers, Francis James, I find, is uni-
scarcely even insinuated—do I rejoice in Francis versal in his loves. He does not swear fidelity to
James at his best. the rose—or he does not swear the particular

Among painters, water-colour painters, Francis fidelity which is only exclusiveness. In every
James is the poet of flowers, as Van Huysum, it garden, every greenhouse, every season of the year,
may be—two hundred years ago—was their prose he has (to use the sailor simile) " a wife in every
chronicler. The public knows Van Huysum best port." He is as various in his appreciations of the
by his work in oils. The amateur of noble prints beloved and the admirable as is a young man by
knows him best by Earlom's two splendid transla- Mr. Thomas Hardy. Primula, tulip, rose, pelar-
tions of him into the medium of mezzotint. But gonium, and then the hundred orchids—having
the not less rare connoisseur of the fine drawings of thanked one of them for its beauty, and profited
a past period knows him by water-colour sketches, by it, he turns with happy expectation to another,
such as those possessed by the department of Nor does disappointment await him.
prints and drawings at the British Museum. And One little confidence, made to me long ago, I
as there are moments, moods, opportunities, when recollect, I propose, before I finish this article,
men apparently far apart get nearer together, so, ruthlessly to break. Mr. James destroys many
just and now again by Van Huysum's practice in drawings. He strangles the ill-begotten. He pro-
water-colour by his pure sketching in that medium nounces with severity judgment upon his creations,
-the gulf that separates him from Francis James He assists the fittest to survive. Three or four

FROM A WATER-COLOUR BY F. E. JAMES